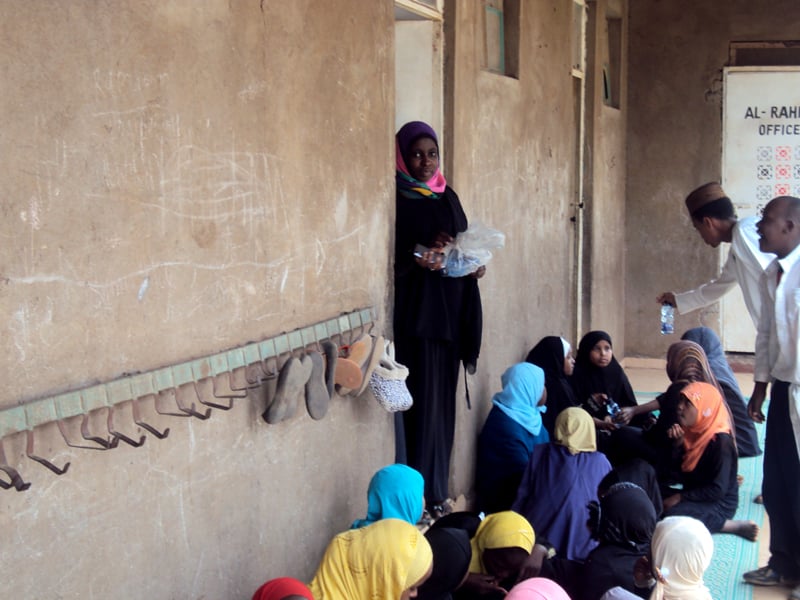 Nathar Abubakar (standing), 26, owned a shop in Mogadishu that was near the hotel. She witnessed the fight between the al-Shabaab fighters and African Union soldiers. She now lives in a refugee camp in the outskirts of Mogadishu, Somalia. Photo by Tonny Onyulo, courtesy of USA Today
April 20, 2015
Tonny Onyulo

Nathar Abubakar (standing), 26, owned a shop in Mogadishu that was near the hotel. She witnessed the fight between the al-Shabaab fighters and African Union soldiers. She now lives in a refugee camp in the outskirts of Mogadishu, Somalia. Photo by Tonny Onyulo, courtesy of USA Today

MOGADISHU, Somalia — Sitting under a veranda at the former headquarters of Somali Airlines, Ali Bashir sipped coffee and chewed khat, an African herb, as he recounted 15 years of anarchy fomented by al-Shabab Islamic terrorists.

"Life is very hard here," he lamented. "There's nothing to eat and nowhere to work. But the rebels will come and still ask you for money."

Since Somalia's central government collapsed in the early 1990s, al-Shabab has emerged as the greatest threat to international efforts to rebuild the east African nation. The al-Qaida-linked militants extort, kidnap, stage terror attacks and control remote areas of the countryside.

In the wake of this month's attack, Somalia President Hassan Sheikh Mohamud called for more cooperation between Kenya and Somalia to eliminate al-Shabab, and Kenyan jets pounded two al-Shabab camps in Somalia.

Bashir, 28, who sold clothing before fleeing here, doubted the Somali government could do much about the terrorist group. He fled to the capital here a few years ago after al-Shabab seized control of a region in the south. He now lives in the old airlines headquarters with 1,000 other families.

"I have grown up in this country without knowing peace or stability," said Bashir, a father of six. "My children have no future because there are no schools and health services in this region. The rebels have destroyed structures and instilled fear to teachers and aid workers working here."

The militants have targeted government offices, United Nations facilities, the airport, the president's palace, hotels and restaurants in their bid to overthrow the government.

With the help of American drone strikes, the government has pushed the extremists out of most large cities, but the group remains active.

"We're in control of the security situation in Mogadishu and other parts of the country," said Abulrahman Ali, a police officer in the capital. "But the militant group still poses a threat to our peace."

Early this year, al-Shabab claimed responsibility for killing at least 27 people in an attack on a popular Mogadishu hotel as senior government ministers were at Friday prayers. The deputy mayor and a member of parliament were among the dead. The deputy prime minister and minister of transportation were injured.

Nathar Abubakar, 26, owner of a shop near the hotel, watched African Union soldiers battle and kill the terrorists. As the gunbattle raged, she ran with her two sons to a refugee camp in the outskirts of the city.

She said al-Shabab militants killed her husband last year while he was working with a local non-governmental organization. "Life is hard in Somalia, especially when you have people who depend on you," she said. "I have seen and experienced terrible things in my life."

Children often bear the consequences of the violence. Osman Mohammed, 12, who works in a mosque to earn a living, had lived with his family in a town 19 miles from Mogadishu before he lost his mother and father in an al-Shabab attack. Aid workers brought him to the capital.

"When my father was killed, I had nowhere to go," Mohammed said. "I was alone and without food or water for five days. ... But for now I'm working and doing well."

Bashir said he knows the United States is unlikely to expand its military role here beyond drone flights, given the death of 18 Army soldiers killed here in a 1993 battle chronicled in the film Black Hawk Down. It prompted President Clinton to pull all U.S. troops out of the country.

Still, Bashir said, he hopes Kenyan and other African Union Troops will send soldiers to confront al-Shabab in the countryside: "I think we'll live like this forever unless we are fully supported by foreign troops to eliminate these rebels.”