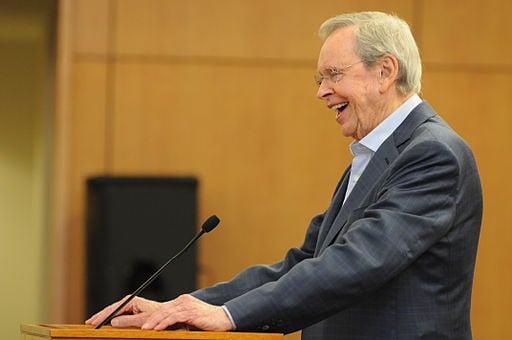 Dr. Charles Stanley, senior pastor of First Baptist Atlanta and founder of In Touch Ministries, thanks U.S. soldiers and their families for their service to the nation during his speech at the All American Chapel of Fort Bragg, N.C., on Nov. 6, 2013.

(RNS) Amid a heated debate over his vocal opposition to homosexuality and same-sex marriage, Atlanta pastor Charles Stanley will decline an award he planned to accept from the Jewish National Fund in Atlanta on Thursday (April 23.)

News that the longtime pastor of First Baptist Atlanta and former president of the Southern Baptist Convention would be honored by the JNF angered many Jews who pointed to his history of vitriolic anti-gay comments.

Stanley said the award was causing too much strife within the Jewish community, and for the sake of his love for Israel, he would not accept it, according to the JNF, a nonprofit that sponsors environmental and educational programs in the Jewish state.

It was Stanley’s idea not to accept the award, JNF spokesman Adam Brill said Tuesday.

“Dr. Stanley feels that he did not want to see any further controversy and I think it’s a laudable and heartfelt decision, and we totally support and embrace it.”

Decrying Stanley’s “sordid history of virulent homophobic statements and actions,” the Southern Jewish Resource Network for Gender and Sexual Diversity (SOJOURN) led a campaign to get JNF to change its mind on bestowing Stanley with its Tree of Life award, which was to be given to him for his support for Israel by the JNF’s Atlanta chapter on Thursday, Israel’s independence day.

“We respect Dr. Charles Stanley’s decision,” said Rebecca Stapel-Wax, executive director of Atlanta-based SOJOURN, on Tuesday. “We are so grateful for the strong support of hundreds of people across the country. We look forward to a productive dialogue with JNF in the coming weeks and building our relationship together to support the local Jewish and LGBTQ communities and Israel.”

Stanley rose to national prominence in the 1980s with his “In Touch” television series and books that sold millions of copies. Though not known as a culture warrior in the mold of the late Jerry Falwell or televangelist Pat Robertson, Stanley, 82, has preached vehemently against homosexuality. He recently submitted a legal brief to the U.S. Supreme Court against legalizing same-sex marriage.

He “has publicly called AIDS God’s punishment for America’s acceptance of homosexuality and called homosexuality ‘destructive behavior,’” read a letter signed by 240 people to JNF Southeast region leaders from SOJOURN.

“He has said that ‘God does not agree with the lifestyle of the homosexual’ and that accepting gay people is ‘an act of disobedience to God,’” the letter continued.

The controversy over Stanley’s award reflects the sometimes awkward embrace between American Jews and evangelicals — fervent partners in support of Israel but also outspoken opponents on many domestic social issues, including homosexuality and abortion rights.

In an earlier statement provided by JNF, the group said Stanley “represents one of the largest Christian communities in the South which has always supported the Jewish people in times of peace and conflict.”