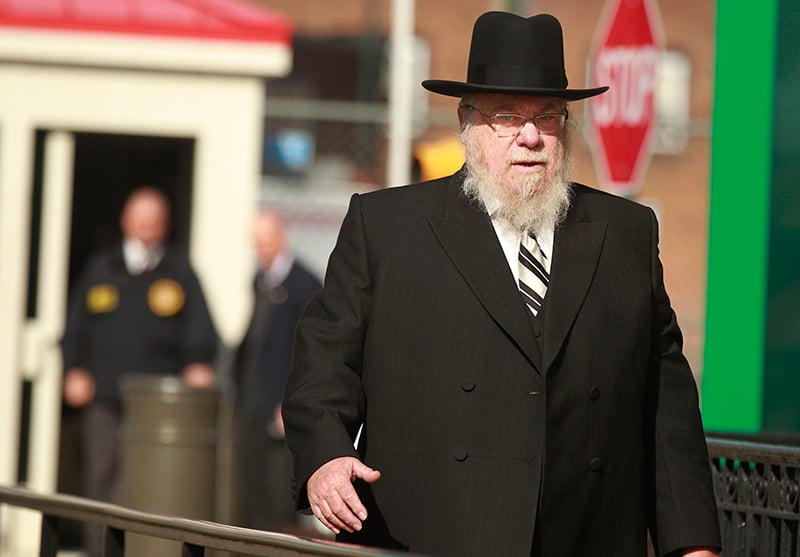 Lakewood Rabbi Mendel Epstein arrives at the Federal Courthouse as closing arguments in the case get underway. Photo by Robert Sciarrino | NJ Advance Media for NJ.com

TRENTON, N.J. — A jury on Tuesday (April 21) convicted Rabbi Mendel Epstein and two of his three co-defendants in a federal kidnapping conspiracy case that charged them with torturing husbands to force them to agree to religious divorces.

At the same time, the jurors acquitted Epstein’s son, David “Ari” Epstein, of all charges.

Mendel Epstein, a prominent rabbi who specializes in divorce proceedings, was on trial along with his son and two other rabbis, Binyamin Stimler and Jay Goldstein, on conspiracy and kidnapping charges that grew out of a federal undercover sting.

After three full days of deliberations, jurors rejected all kidnapping charges against the men.

The father of nine, grandfather of 45 and great-grandfather of five, Epstein, 69, was found guilty of conspiracy to commit kidnapping but not guilty of an attempted kidnapping charge related to an undercover sting. In that sting, FBI agents secretly recorded conversations in which Epstein boastfully claimed that his “team” kidnaps and beats stubborn husbands until they agree to give their wives religious divorces, known as gets.

Goldstein, 60, who was described as the scribe for the divorce decrees, was convicted of conspiracy to commit kidnapping and attempted kidnapping. He was acquitted of one kidnapping charge. 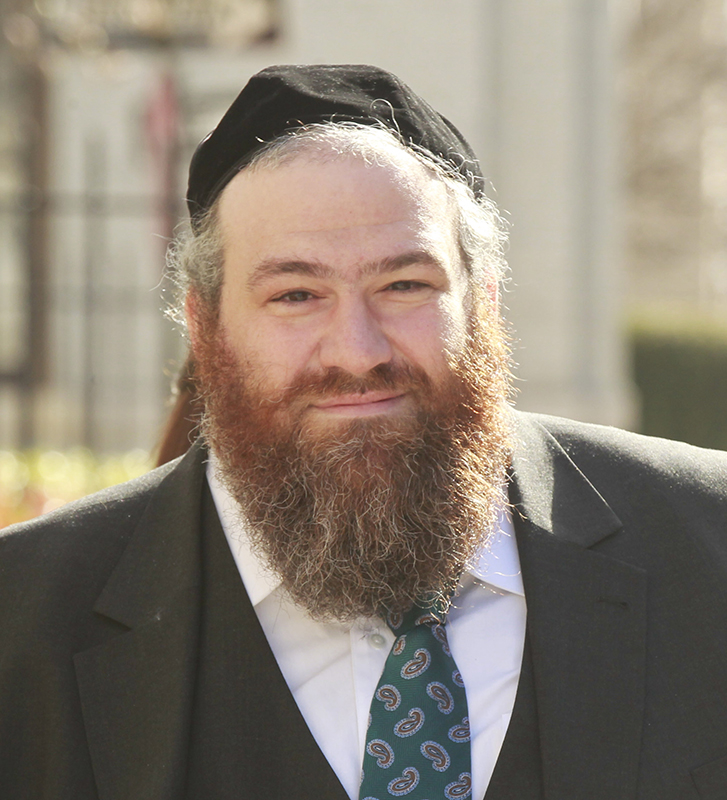 Rabbi Binyamin Stimler, one of the defendants in the conspiracy and kidnapping trial of Lakewood Rabbi Mendel Epstein, arrives at the Federal Courthouse as closing arguments in the case get underway. Photo by Robert Sciarrino | NJ Advance Media for NJ.com

Stimler, 39, who prosecutors said served as a witness for the divorces, was found guilty of conspiracy to commit kidnapping and attempted kidnapping.

The younger Epstein was found not guilty of all charges against him, which included conspiracy to commit kidnapping and two counts of kidnapping. Another count of kidnapping had been dismissed during the trial.

Leaving the courtroom, the elder Epstein said the jury’s verdict perplexed him.

“I don’t understand why I was found guilty in count one when there was no other counts,” he said.

He said he had no doubt about the outcome for his son.

“We knew he was not guilty,” Epstein said. “He wasn’t there.”

Nathan Lewin, the attorney for Stimler, said he plans to appeal.

“Ultimately the word is going to have to come from the Court of Appeals,” he said after court. “The evidence established that Rabbi Stimler was not guilty and I’m shocked by the jury’s verdict.”

Goldstein’s attorney, Aidan O’Connor, said the verdict shows jurors rejected the testimony some of the victims as well as one of the government’s main witnesses, David Wax, who testified against three of the four men. He said their decision most likely came from Epstein’s comments in those secretly recorded conversations that Goldstein would be in charge of collecting the fee for a forced divorce.

“I don’t think what’s here fits into any traditional kidnapping in any way, shape or form,” O’Connor said.

David Epstein’s attorney, Henry Mazurek, called the verdict “bittersweet” because of the acquittal of his client but the conviction of the elder Epstein.

Sentencing is set for July 15. Epstein, Goldstein and Stimler face up to life in prison.

Attorneys for all three men vowed to appeal.

In the eight weeks of testimony before U.S. District Judge Freda Wolfson, federal prosecutors offered testimony about the beatings of five men in four separate incidents between 2009 and 2012 as evidence of the conspiracy.

But in determining the kidnapping charges, jurors only were allowed to consider two of those incidents involving two Brooklyn men — the abduction and beating of Israel Markowitz in 2009 in a parking lot in Lakewood, N.J., and the ambush and beating of Yisrael Meir Bryskman in Wax’s Lakewood home in 2010.

Wax contended Epstein arranged the kidnapping, that his son participated in the beating and that Goldstein wrote the official divorce decree. Markowitz claimed David Epstein was the driver of the minivan that approached him before the attack.

And in the end, the jury of six men and six women found none of the defendants guilty in those two kidnappings.

The attempted kidnapping offenses were related to the Oct. 9, 2013, arrests of Stimler, Goldstein and six other men as part of a sting at an Edison warehouse. Undercover FBI agents had arranged for them to meet there to ambush a husband — who turned out to be fictional — to force him to agree to a divorce.

Prosecutors charged that the elder Epstein arranged the kidnappings, beatings and torture of husbands who refused to give their wives religious divorces. In some of those cases, they said, Epstein demanded $60,000 to pay members of his alleged “team.”

Defense attorneys had argued their clients were, in part, framed by Wax, a Lakewood rabbi who they said sought to reduce a possible life sentence after admitting to Bryskman’s kidnapping. They also contended identifications of the younger Epstein by Markowitz and another witness were unreliable.

Earlier in the day, defense attorneys asked for a mistrial after discovering that jurors had an incorrect copy of the indictment.

But Wolfson said the incorrect indictment wasn’t an egregious enough error to warrant ending the two-month-long trial without a conclusion.

Instead, she called jurors into her courtroom and told them they were not to consider that statement when weighing the evidence against Epstein or his son. Wolfson also gave the jury a corrected version of the indictment.

Hours later, jurors also asked for the transcript of the testimony of Wax, who incriminated Epstein and his son in Bryskman’s kidnapping.

(MaryAnn Spoto writes for The Star-Ledger in Newark, N.J.)