World Bank President Jim Yong Kim takes his seat as he arrives to brief the press at the opening of the International Monetary Fund and World Bank’s 2015 annual spring meetings, in Washington, on April 16, 2015. Photo courtesy of REUTERS/Mike Theiler
*Editors: This photo may only be republished with RNS-WORLDBANK-POOR, transmitted on April 22, 2015.

(RNS) The World Bank is teaming up with global religious leaders in a 15-year effort to end extreme poverty by 2030.

About 35 religious groups worldwide, including Bread for the World, Islamic Relief International, the Religious Action Center of Reform Judaism and Sojourners, endorsed the call to action. Supporters include Christians, Jews, Muslims, Baha’is and others.

“Our approach to this staggering need must be holistic, rooted in the spiritual visions of our respective faiths, and built on a shared recognition of the intrinsic dignity and value of every life on Earth,” the call said.

Observers say it’s the first time the World Bank has tapped the reach and resources of religious groups in combating extreme poverty — partly out of a realization that the work is too big for any one institution, and also in hopes of limiting unnecessary duplication between the World Bank’s ideas and those of various religious groups.

“There’s a real convergence between these dual goals of the bank and many of the commitments and convictions of religious institutions and organizations,” said the Rev. Adam Taylor, a Sojourners and World Vision alum who now oversees faith-based initiatives at the World Bank.

During an April 9 teleconference, Wold Bank President Jim Yong Kim said the number of people living in extreme poverty — living on less than $1.25 per day — has fallen from 2 billion in 1990 to 1 billion today. And he strongly believes that with enough support, that figure could be eliminated in another 15 years.

But Kim said that in order to reach the goal, there will be two important aspects to the fight to end poverty: gathering evidence on what works and what doesn’t work in combating poverty, and enlisting the aid of religious communities.

“I believe that some of the most important leaders in the movement to end extreme poverty will be people of faith, people who are motivated fundamentally to help the most vulnerable among us,” Kim said.

The Rev. Wes Granberg-Michaelson, former general secretary of the Reformed Church in America and a noted observer of the developing world, said it’s important for faith groups to provide the moral capital for the movement. 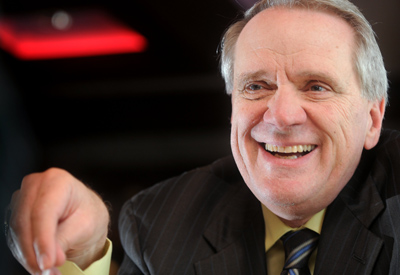 Wes Granberg-Michaelson, former general secretary of the Reformed Church in America, said he believes it’s important for faith groups to provide the moral capital for the movement and to work together on this call. Photo by Katy Batdorff/The Grand Rapids Press

“Important leaders from all of those traditions are heavily involved in this process. That’s what makes it so interesting,” Granberg-Michaelson said.

But he also said it’s important for faith leaders to go back home and “to convince people in their organizations and at the grass roots that this now is a possibility.”

America’s second-largest Protestant denomination knows the power of grass-roots organizing; on Wednesday (April 22), the United Methodist Church presented a check for $9.6 million to the Global Fund, which was founded in 2002 to combat HIV/AIDS, tuberculosis and malaria across Africa.

The $9.6 million, raised locally through pancake breakfasts and lemonade stands, is the largest single donation from a religious group to the Global Fund, officials said. It also shows the potential impact when religious and global institutions team up to tackle an ambitious goal.

“Baha’i communities around the world are contributing to eradicating poverty with grass-roots efforts to build capacity through education and other processes, with a goal of enabling individuals everywhere to become protagonists of their own progress and development.”

In July, another conference will bring together faith-based leaders, practitioners and academics to talk about ways to build more effective bridges between developmental institutions and faith-based organizations.