(RNS) Sir Thomas More loses his head in this Sunday’s episode (April 26) of the acclaimed PBS historical drama, “Wolf Hall,” which is not much of a spoiler since that’s what infamously happened to More in 1535 at the hands of King Henry VIII.

The real suspense now is whether More will also lose his halo.

Not officially, of course: Thomas More remains a Roman Catholic saint by dint of his refusal to accept Henry’s plot to have his first marriage annulled.  The onetime Lord Chancellor of England also opposed Henry’s power play against the pope, which led to the establishment of the Church of England.

More was formally canonized in 1935, on the 400th anniversary of his execution.

But in these past decades the secular world was also burnishing More’s reputation by turning him into the contemporary standard-bearer of the righteous man, wielding only his conscience and religious principles against the power of the state — the “Man for All Seasons,” as the 1966 Academy Award-winning film (and earlier play) depicted him.

Yet what “Wolf Hall” does — and the reason such an intense debate has erupted over the series — is to engage in some bold revisionism by depicting More not as a saint but as “a heresy-hunting, scrupulous prig,” as the Catholic writer George Weigel put it.

Conversely, More’s nemesis, Thomas Cromwell — who maneuvered to supplant More as the king’s chief lawyer and political operative, and became a Protestant icon — is now, in Weigel’s words, “the sensible, pragmatic man of affairs who gets things done, even if a few heads get cracked (or detached) in the process.”

This new-and-improved version of Cromwell (not to be confused with his 17th-century Puritan descendant Oliver Cromwell) is in fact very much the hero of the series, which airs Sundays at 10 p.m. ET, just as he is in the best-selling 2009 novel by Hilary Mantel that the BBC show is based on. 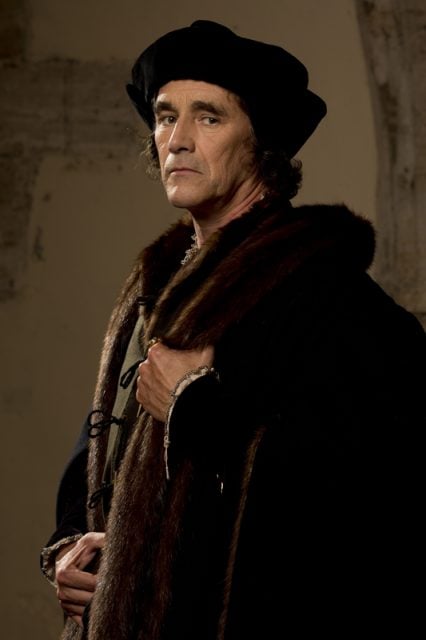 It’s an approach that irritates many scholars and critics, but the debate poses a special threat to today’s defenders of religious freedom, especially American culture warriors on the right who have taken More as the symbol of their fight.

“(T)o me it is impossible to miss the allusions to current debates about rational government and religious belief,” wrote Mark Movsesian, a professor at St. John’s University School of Law,  in the conservative journal First Things. “The message, for religious liberty, is not a congenial one.”

“The fact that this hatchet job on Thomas More appears in an impeccably well-done BBC production — surely the gold standard in upper-middle-class entertainment — shows how fast our culture is changing, and how much work defenders of religious liberty have before them,” he wrote.

Indeed, in 2012 the U.S. Catholic bishops picked More as a poster saint for their annual “Fortnight for Freedom” campaign, aimed in large part at pressuring the White House to change a requirement that religious employers provide free birth control coverage in their health care policies.

Cardinal Francis George was a leader in that fight, and when he died last week, the former Chicago archbishop was himself compared to More.

Yet rarely is anyone, in today’s politics, or in history for that matter, as simple as we might like.

In fact, when the American bishops were hailing the use of More in their religious freedom campaign, George took the microphone at their meeting to warn his colleagues “to be careful how we use” More. The reason: “He was not a tolerant person. … He himself put people to death because they did not accept the truth of the Catholic faith.”

So were More and Cromwell saints to emulate? Or sinners to castigate?

Even More’s ardent fans acknowledge he was far from perfect and, as Villanova law school professor Michael Moreland put it,  More “generally shared in the prejudices of his age and was complicit in practices … that we would today regard as morally odious.”

Among those practices were burning alleged heretics at the stake — six such executions took place while More was Henry’s chancellor, from 1529-32, and More had a direct hand in at least three of those.

More’s agents also succeeded in apprehending the famous Bible translator William Tyndale, who was brutally killed a year after More’s own death.

Torture was another common practice, one that “Wolf Hall” shows More employing quite sadistically, and More’s vicious broadsides against heretics (“the devil’s stinking martyrs”) undoubtedly contributed to the persecution of many.

Yet More denied that he ever tortured anyone, and his record was certainly distorted by centuries of Protestant counterpolemics.

Largely absent from “Wolf Hall” is the charming and witty More, a renowned humanist and clear-eyed observer of the sins of his age; a father who insisted on educating his daughters just as he did his sons, and who kept a menagerie of exotic animals.

“More was neither blood-soaked nor a hypocrite, but he was a man of his times, not of ours,” the eminent Cambridge University church historian Eamon Duffy put it in The Tablet of London. Some revision is needed but the new portrait, Duffy complains, “is too dark.”

In “Wolf Hall,” Mantel — who was raised Catholic but is now a sharp critic of the church — seeks to rehabilitate Cromwell to such an extent that she, and the series, turn him into an overly sympathetic protagonist: a man of common birth who overcame an abusive childhood to become a loving family man and successful lawyer. Saddened by the injustice he sees around him, he does what he can to mitigate the violence and instill a sense of Protestant moderation and reason into the headstrong monarch.

Except that’s hardly the truth either, which makes distinguished historians such as Simon Schama grind their teeth.

Rather than “a much-maligned, misunderstood pragmatist from the school of hard knocks who got precious little thanks for doing Henry VIII’s dirty work,” Schama wrote in the Financial Times, Cromwell was “a detestably self-serving, bullying monster who perfected state terror in England, cooked the evidence, and extracted confessions by torture.”

Cromwell “was the Islamic State of his day,” Dominic Selwood wrote in The Telegraph, a man “whose record for murder, looting, and destruction ought to have us apoplectic with rage, not reaching for the popcorn.”

So will an argument about a television show change the course of history?

Since sanctity and ambiguity don’t seem to mix for many people, the vast majority of viewers may simply throw up their hands and declare a pox on both their houses and conclude that all religions wind up in fanaticism.

Yet this fourth episode (of six total) is in many ways the most powerful and affecting — and instructive — so far.

It features pointed debates about personal conscience, and while More’s character is deprived of his most famous final lines, and Cromwell’s image is further buffed, their final encounter in More’s prison cell reveals a deeper humanity — and spirituality — in each of them, and perhaps a better lesson than their dueling hagiographies.

“When we meet again in heaven, as I hope we will,” More says to Cromwell, “all our differences will be forgotten. But for now, we can’t wish them away.”

“More or less,” by Eamon Duffy in the Tablet of London. The eminent Cambridge University church historian provides a balanced take on the historical record and contrasts it with the account in “Wolf Hall.”

“How ‘Wolf Hall’ will entertain millions — and threaten to distort history in the process,” by Gregory Wolf in the Washington Post. Wolf details many of the arguments critical of Mantel’s version.

“‘Wolf Hall’ and upmarket anti-Catholicism,” by George Weigel. The Catholic apologist says the series and novel show an anti-Catholic bias that has shifted from the Protestant to the secular world.

“imagining Thomas More (or not),” is a blog post by the Baylor literary critic Alan Jacobs. Jacobs cites his own review of Mantel’s book five years ago and comments on the Weigel and Movsesian essays.

“Sir Thomas More: saint or sinner?” by Peter Stanford, a Catholic writer, in The Telegraph.

“Thomas Cromwell was the Islamic State of his day,” by Dominic Selwood in The Telegraph. Selwood argues that Cromwell was in fact a man “whose record for murder, looting, and destruction ought to have us apoplectic with rage, not reaching for the popcorn.”

“Like Isis, Thomas More believed passionately in burning people alive,” by Kate Maltby in The Spectator. Maltby criticizes Catholic bishops who have denounced the depiction of More in “Wolf Hall” and says More demonstrates where religious warfare of any kind leads.

“Thomas More is the villain of Wolf Hall. But is he getting a raw deal?” by Vanessa Thorpe in The Guardian. Thorpe quotes the Catholic writer Peter Stanford as well as the Oxford church historian Diarmuid MacCulloch, a great fan of Cromwell over More.

“Invitation To a Beheading,” by the New Yorker book reviewer James Wood. This 2012 review makes some interesting observations about the goals of Mantel’s revisionism, and how it plays to a modern audience.

“Thomas More Was Not ‘Unnaturally Fond of Torturing Heretics’,” is a 2012 post on Mantel’s book at the Mirror of Justice blog. Written by Villanova law professor Michael Moreland, it details More’s record.