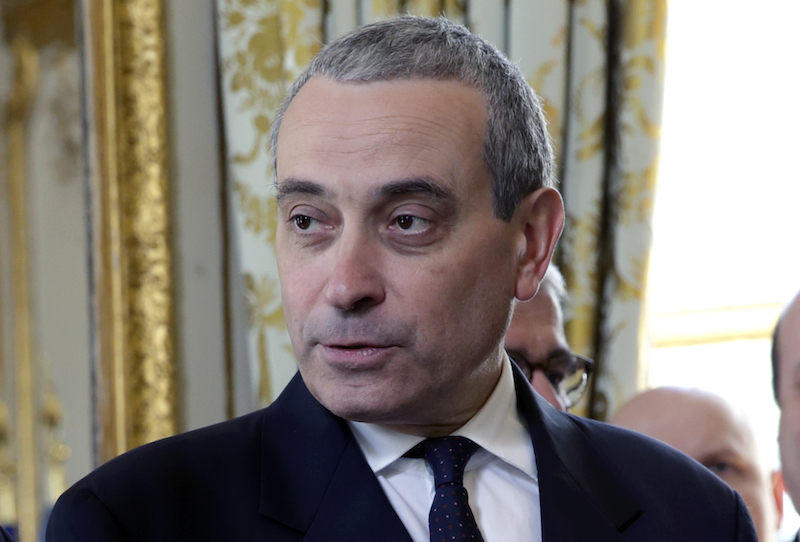 Laurent Stefanini is seen at the Elysee Palace in Paris on April 22, 2015. Photo courtesy of REUTERS/Philippe Wojazer. *Editors: This photo can only be used with RNS-STEFANINI-VATICAN.
April 24, 2015
Elizabeth Bryant Laurent Stefanini is seen at the Elysee Palace in Paris April 22, 2015. REUTERS/Philippe Wojazer. *Editors: This photo can only be used with RNS-STEFANINI-VATICAN and RNS-FRANCE-VATICAN, transmitted April 24, 2015.

PARIS (RNS) Pope Francis has been hailed for his forward thinking, but -- at least according to French news reports -- the pontiff has put on the brakes when it comes to a gay French ambassador at the Vatican.

In January, French President Francois Hollande nominated his protocol chief Laurent Stefanini as Vatican envoy to replace outgoing ambassador Bruno Joubert. The pick seemed ideal: 55-year-old Stefanini is described as brilliant and a devout Roman Catholic, who secured support for his candidacy from Cardinal Andre Vingt-Trois, the archbishop of Paris. He is also a known quantity at the Vatican, having served as a top official at the French embassy to the Holy See a decade ago.

But so far, his nomination has gone nowhere. On Wednesday (April 22), France’s investigative weekly “Le Canard Enchaine" reported Pope Francis met with Stefanini last weekend. The message: The pontiff did not appreciate France’s 2013 same-sex marriage law, nor being pressured into accepting Stefanini’s candidacy.

French media report the standoff is due to Stefanini’s sexual orientation; France’s foreign ministry has only said his private life should be respected.

The pope's reaction, as reported in the media, appears to contrast starkly with his remarks two years ago in which he said, “If a person is gay and seeks God and has good will, who am I to judge?”

Another French media report said that the unusual meeting between Stefanini and Francis -- a pope rarely gets directly involved in the appointment of an ambassador -- was friendly and lasted 40 minutes, and ended with the two men praying together.

The French government has said little about the matter, except to confirm the meeting between the pope and the Vatican nominee took place.

“Nothing has changed,” government spokesman Stephane Le Foll told reporters. “France has proposed a candidate and for the time being we are waiting for the Vatican’s reply, after the usual discussions and review of his candidacy.”

“The Vatican seems badly placed to refuse homosexuals,” Kouchner told RTL Radio this week, adding, “but apart from that, I adore Pope Francis.”