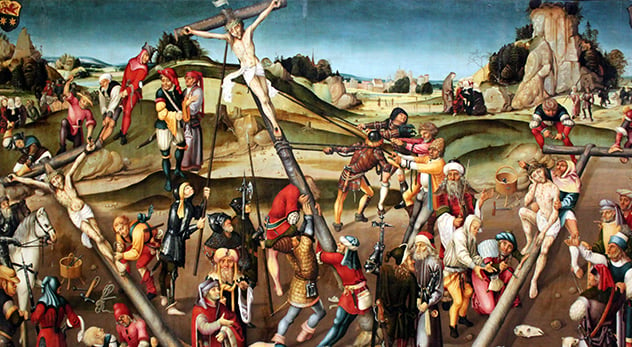 "Jesus did not teach that God’s wrath burns against us but that God loves us," says theologian Tony Jones. He argues that the traditional Christian view of atonement was largely a medieval invention. - ("Crucifixion of Christ" by unknown Stausborg master c. 1515 - courtesy of Wikimedia commons - http://bit.ly/1DKsXBn)
April 29, 2015
Jonathan Merritt

"Jesus did not teach that God’s wrath burns against us but that God loves us," says theologian Tony Jones. He argues that the traditional Christian view of atonement was largely a medieval invention. - ("Crucifixion of Christ" by unknown Stausborg master c. 1515 - courtesy of Wikimedia commons - http://bit.ly/1DKsXBn)

For those who hold to traditional Christian theology, explaining what happened to Jesus on the cross doesn't take long: Humans are sinful...sin makes God angry...God requires a sacrifice to quell God's anger...God sent his son Jesus to be that sacrifice. So, on the cross, God killed (or perhaps just permitted) the execution of Jesus in order to satisfy God's anger against sinful humanity. Got it? Good. That settles it.

Actually, that doesn't settle it if you're Tony Jones, a theologian and author of "Did God Kill Jesus? Searching for Love in History's Most Famous Execution." He argues that notions of a God who demanded and perhaps participated in the gruesome execution of an innocent Jesus is largely an invention of the medieval church that became enshrined in orthodox Christianity, and is not what the Bible actually teaches. Here we discuss what he thinks Christians have gotten wrong and how he understands the cross event differently.

RNS: You critique the notion that humans are "sinners in the hands of an angry God" because it is "not what the Bible teaches." What do you think we've gotten wrong?

TJ: The beautiful thing about the cross is that it has always been the answer. It’s the question that has changed. So I’m not necessarily saying that Jonathan Edwards was wrong when he preached that to his congregation. To his people, in that time and place, the problem of guilt from Adam and Eve’s sin weighed heavily. But centuries before that, the problem wasn’t sin as much as it was Satan and demons—nevertheless, the cross was still the solution.

If we’ve gotten something wrong about the cross in the modern church, it’s that we’ve thought there’s only one way to explain how Jesus’ death saves us. There have been many versions of the doctrine we call the “atonement": Payment, Victory, Magnet, Divinity, and Mirror.

RNS: You argue against the notion that God demanded the death of his son to quell his wrath, but don't you admit that there are at least some Bible passages that seem to teach this?

TJ: The Bible is not univocal when it comes to the cross. Every view of the crucifixion has verses and passages that support it. That’s probably why the early church never convened a council to decide once-and-for-all how to understand the cross, as it did for the natures of Christ, the Trinity, and the books of the Bible. There actually are not any passages that explicitly say that God’s wrath could only be satisfied by his perfect son’s death, but you can string together a few verses from various places to make that argument.

RNS: How does the traditional understanding make us fearful of God?

TJ: [tweetable]The cross cannot pit God against Jesus.[/tweetable] The Father and the Son are united in purpose and in love—the New Testament is unequivocal about that. But the "Payment" view of the atonement breaks that rule. It’s as if God looks down the barrel of his rifle, swings it from us to Jesus, and pulls the trigger. Some of us have been told that God is so disgusted by our sin that he can’t even stand to look at us—my only hope is that when he looks at me, all he sees is Jesus.

This engenders a terribly dysfunctional relationship with God in which we need to hide behind Jesus whenever God looks our way. The Bible teaches that God created us knowing that we would sin, and God loves us anyway. We don’t have to hide from God.

RNS: Doesn't the Bible talk about fearing God in positive terms too? What about people who say that a healthy fear of God is a good thing?

TJ: The “fear of the Lord” is definitely a theme in the Hebrew Bible. I myself feel a respect for God’s power and God’s might. But mainly, I feel a great attraction to God’s humble love. The story of the Bible is a story of God’s humble love for us. Other ancient cultures worshiped gods who were terrifying and arbitrary, but that was not Israel’s experience. Instead, they sang psalms celebrating God’s presence and God’s steadfast love. [tweetable]Jesus did not teach that God’s wrath burns against us but that God loves us[/tweetable], that God has rooms in his mansion for us, and that God will go to the greatest lengths for us.

RNS: You encourage people to let go of "the wrathful God," but what do you do with all the pictures of divine wrath in the Bible? Aren't you just picking and choosing?

TJ: In the book, I do not simply ask people to let go of the “wrathful” God. What I show is that the Payment view of the atonement is only one of the many biblical metaphors available to us. And then there’s the argument from reason: God did not set up a system by which we would fall short of his requirements, then demand that his son endure a violent execution to fulfill those requirements.

It's tempting to feel defensive when someone challenges our primary view of the atonement, but if we're really honest, most of us probably feel uncomfortable and have some questions about why God chose the crucifixion. I'm trying to explore those questions and see if we can understand the traditional crucifixion in a way that better matches our ideas about a loving God. Those who prioritize the Payment view have made the Bible one-dimensional, and that’s a mistake.

RNS: The Bible says that it "pleased" God to "crush" Jesus, no? TJ: Not exactly. The verse, Isaiah 53:10, says, “The Lord was pleased to crush [or bruise] him,” and it is part of the famous “Suffering Servant” passage from Isaiah. Prior to Jesus, Israelites did not think this portion of Isaiah was about their long-awaited Messiah. But after Jesus’ death, the early church began to re-interpret this passage. Jesus was not the kind of Messiah that anyone was expecting, so they were rethinking a lot in those early decades!

In his life and ultimately in his death, Jesus takes our ailments upon himself--both our physical and spiritual ailments. Even before Jesus, Jews considered the coming messianic age to be a time of great healing—no more sin, no more disease. So if we can rejigger our understanding of sin, we can see how Jesus died for our sin. Jesus doesn’t just wipe away our sins: he bears them; he carries them. And on the cross they crush him, just as they so often crush us.

RNS: Crucifixion is an agonizing and violent form of execution. How can you then say that "crucifixion is the solution to our violent tendencies?"

TJ: This is, indeed, the most vexing problem that we have with the atonement. Many people today are troubled by the cross' violence. "Why couldn’t God have saved us another way?" they ask. I wonder that, too. Among the views I investigate is the Mirror theory, recently developed by René Girard. He writes persuasively that Jesus’ death is the end of the sacrificial system because it shows the bankruptcy of violence. When we look at Jesus hanging on the cross, God is holding up a mirror, reflecting back at us the end result of all our violence.