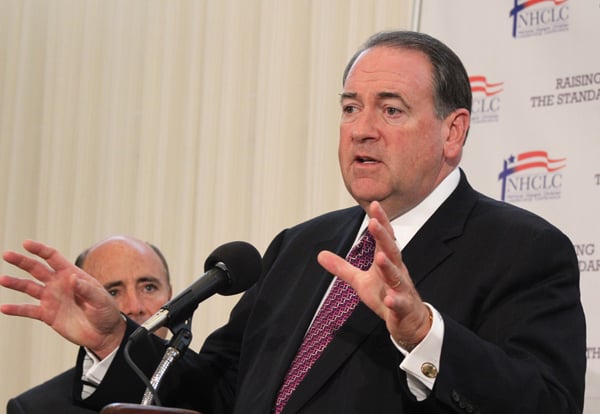 WASHINGTON (RNS) Former Arkansas Gov. Mike Huckabee is no stranger to the pulpit — or politics. The former Fox News Channel host announced Tuesday (May 5) his bid for the GOP nomination for the White House. Here are five facts about this Southern Baptist’s perspectives on faith.

Huckabee was a pastor who preached for 12 years in Arkansas pulpits before he became a governor and, later, a 2008 candidate for president. While he was governor (1996-2007), he maintained his pastoral instincts, sometimes contacting members of his Southern Baptist church when he learned of a death in their families.

“I think it’s the greatest preparation that a person can have for public service,” he told RNS in a 2007 interview. “Somebody says they want to talk about the issue of the elderly, I’ve dealt with those folks. I’ve dealt with a 14-year-old girl who’s pregnant and hasn’t told her parents yet. I’ve talked to the young couple who’s head over heels in debt. … I think it gives you a real perspective about people and what they’re going through that’s important.”

If elected, he would be the first minister elected to the Oval Office (although James Garfield was a lay minister in the Christian Church (Disciples of Christ) and Jimmy Carter is a well-known Baptist Sunday school teacher).

READ: Mike Huckabee has one unique line on his resume: pastor

2. He led Baptists statewide, not just in the pew.

While he was pastor of Beech Street First Baptist Church in Texarkana, Ark., from 1986 to 1992, Huckabee, now 59, was the youngest president of the Arkansas Baptist State Convention, a job that helped prompt him to think about switching from pastoring to politics. Pastor David Uth, the leader of First Baptist Church in Orlando, Fla., told RNS that in that post, Huckabee worked to calm differences between moderate and conservative Baptists in his home state.

3. He is a favorite of evangelicals and he claims them, too.

“There are a lot of people running for president,” he told the Fort Lauderdale, Fla., Values Voter Presidential Debate, whose 2007 participants gave him a 63 percent win in its straw poll. “Many of them will come to you. I come from you.” Christian publisher Steve Strang urged 1,000 readers of his magazines — Charisma and New Man — to give $1,000 each to Huckabee’s 2008 campaign. He won the 2008 Iowa caucuses — about 60 percent of Iowa GOP caucus-goers are evangelicals — but dropped out when he was overtaken by Sen. John McCain.

4. He is a fierce defender of traditional marriage — and Kim Davis.

Huckabee was at the side of Kentucky county clerk Kim Davis when she was released from jail in September after refusing to issue marriage licenses to same-sex couples. And he told the crowd waiting for her that he was willing to take her place.

5. As a political leader, he says he respects people of all faiths and no faith.

“It was never my desire to use my position to push a particular religious doctrine through the official channels of government. Spiritual convictions should certainly be reflected in one’s worldview, approaches to problems, and perspective,” he wrote in his 2008 book, “Do the Right Thing.” “An atheist who believes that we are on our own and that our only true God is the natural world might be more protective of bugs, plants, and animals than one who believes that God created all these things for us to manage, care for, and even use in a responsible manner.”

Christianity
Evangelicals a rising force inside Argentine prisons
Follow us on Facebook!
Submit your photos to RNS