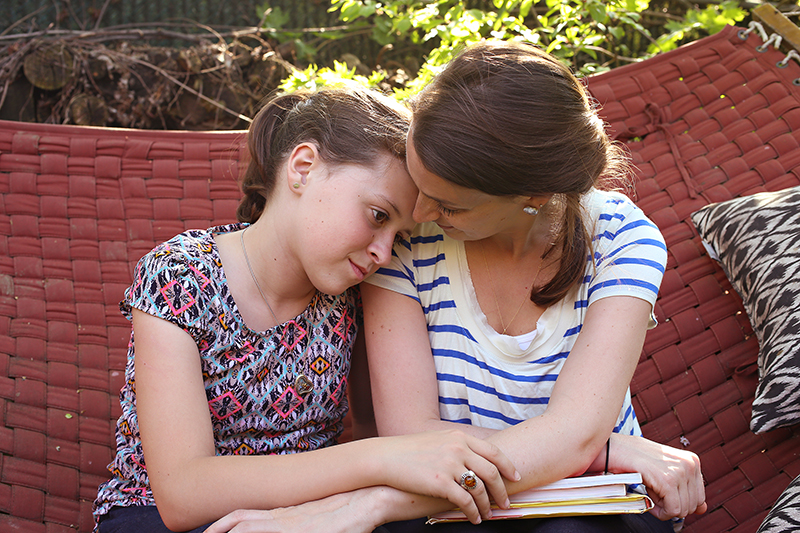 Eliza Lamb and her daughter, Madeline, at their home in the Astoria neighborhood of Queens, N.Y., on Monday, May 4, 2015. Maddie attends a Catholic school but is learning about other religions through reading about them. Religion News Service photo by Alexander Cohn

(RNS) Religious identity used to be “inherited.” “Cradle Catholic” is shorthand for born into the faith; within Judaism, the faith is passed through a Jewish mother to her children unless they grow up to proclaim a different religion.

But children don’t just inherit parents’ spirituality, says psychologist Lisa Miller in her new book, “The Spiritual Child.” She writes that the essential sense of a transcendent power in the world — one that will love, guide and accept them and wrap them in a protective layer of self-worth -– has to be nurtured.

And for that, call (and thank) your mom or grandmom. 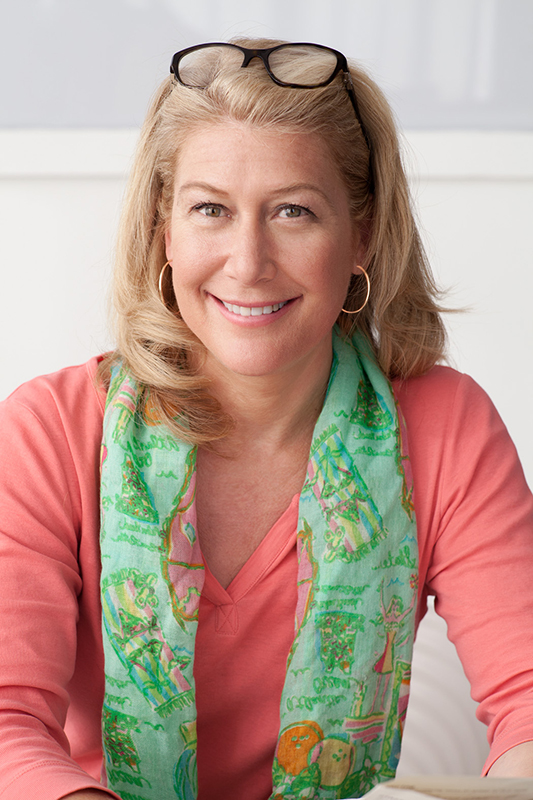 Miller, professor and director of clinical psychology at the Teachers College of Columbia University, scrupulously uses the neutral reference to “parents” throughout “The Spiritual Child.” But sorry, fellas, her research and narrative examples are replete with women in a book released just in time for Mother’s Day.

“Science shows women are central to the spiritual development of children and that their sense of connection to a God or higher power is the cornerstone of psychological thriving and resilience across their life span,” Miller said in an interview.

“Children get plenty of good things from dad, but it’s the mother whose spiritual practices and observances really impact both daughters and sons, particularly daughters,” she said. Miller’s studies found children with a spiritual connection at a young age were “90 percent less likely to be depressed” as teens or young adults.

This doesn’t necessarily mean a forced march to a house of worship — which can be a complicated command for many interfaith couples who often compromise by making no religious choice at all. Miller sees no advantages in organized, branded religions — particularly ones that minimize women’s roles, which her research showed “gave no benefit” to women’s spiritual and psychological well-being.

The key is to “figure out how you pray,” said Miller, with an emphasis on the personal.

“It’s less important which religious tradition you observe if your children hear you speak authentically about spirituality and your own relationship to the creator and you let them know the spiritual life is as real as the earth under our feet: We stand on it and we count on it,” said Miller.

Miller, 48, who is Jewish, said she grew up in the Midwest in a community where, she said, “spirituality was in the water. We knew we were born spiritual. It was based on love and on relationships.”

Even mothers whose religious lives were damaged by “bad messengers” can honor their children’s inborn curiosity and let them have their own spiritual pilgrimage, Miller said.

That’s how it’s been for Eliza Lamb and her daughter, Madeline.

“I was never very religious. I was always very spiritual but very alienated by the Catholic Church,” said Lamb, 32, a photographer who teaches art and education at Colombia University’s Teachers College. 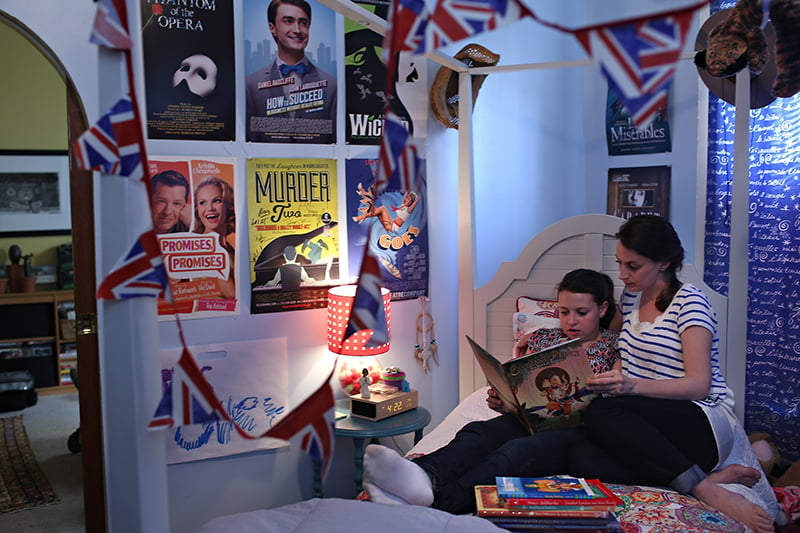 Eliza Lamb and her daughter, Madeline, at their home in the Astoria neighborhood of Queens, N.Y., on May 4, 2015. Maddie attends a Catholic school but is learning about other religions through reading about them.  Religion News Service photo by Alexander Cohn

“I always had a very deep knowing that there was a path for me and that I would be guided on that path. But no one talked openly. No one I knew was spiritual but not religious so I always felt very judged by our priest in a small town in Virginia,” said Lamb.

“I saw a lot of hate coming out of organized religion. The loudest voices I heard coming from churches were negative. I said that’s not what I want to be part of.”

She knew that for sure when a Catholic priest refused to perform her wedding, and then refused to baptize Madeline because Lamb had married outside the church. Ultimately, Eliza Lamb’s mother baptized Madeline in the ocean.

Rather than choose a church for Maddie, now 12, Lamb schooled her in a wide-open spirituality and paid attention when the little girl spoke of “spiritual things she had not been taught,” such as spirit guides or reincarnation. Madeline shows some of her spiritual books at her home in the Astoria neighborhood of Queens, N.Y., on May 4, 2015. Religion News Service photo by Alexander Cohn

Lamb brought her books on the Buddha, Jewish holidays, Hindu deities — “anything I could find, we would read and we would talk about their positive lessons and the importance of seeing everyone as a fellow human being and having compassion for others.”

Ironically, Maddie wound up in a Catholic school near their Queens neighborhood. Still, it startled Lamb when her daughter, who cannot take Communion with her classmates, came home and told Lamb, who is now divorced, “Mom, don’t worry, I don’t think you’re going to go to hell. At school we were learning if you get divorced you are going to hell.”

Yet today, mother and daughter are churchgoers once more — at the Cathedral Church of St. John the Divine, an Episcopal congregation at the edge of Columbia’s campus on the Upper West Side of Manhattan, where all but one of the priests are women.

Lamb first went in search of a church that would baptize her niece and nephew and Maddie. Drawn in by the beautiful cathedral — and its female clergy — she asked to be baptized there as well.

Maddie said she particularly likes the worship “where everybody in the whole church connects all at one time. That really helps with the feeling that the Holy Spirit is there. And they have women preach. I think that’s pretty empowering.”

Church or no church, Maddie has found her own ways to pray.

“I think of myself as someone who can connect with God. I kind of knew I had this for as long as I can remember. I can connect through prayer and occasionally, if I have an issue or a problem to take to God, I connect with singing. It’s like praying,” said Maddie.

And it’s a bond between her and her mother. Said Maddie: “It’s something special we share.” 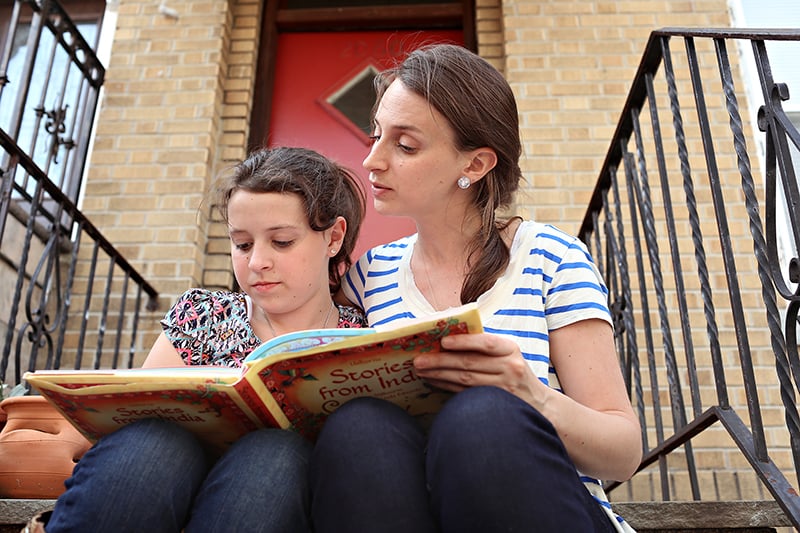 Eliza Lamb and her daughter, Madeline, at their home in the Astoria neighborhood of Queens, N.Y., on May 4, 2015. Religion News Service photo by Alexander Cohn

News
God is a mother, too, writes children’s book author Teresa Kim Pecinovsky
Follow us on Facebook!
Submit your photos to RNS