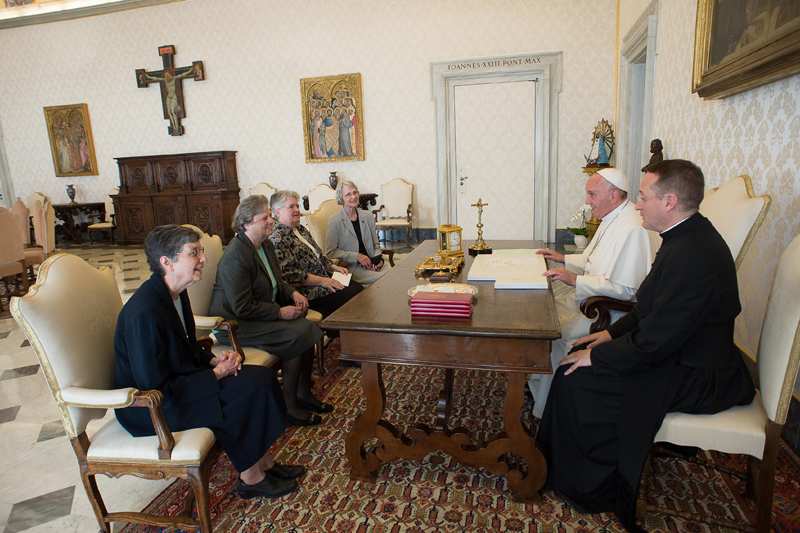 Pope Francis meets with representatives of the U.S. Leadership Conference of Women Religious in his library in the Apostolic Palace at the Vatican on April 16, 2015. The same day the Vatican announced the conclusion of a seven-year process of investigation and dialogue with the group to ensure fidelity to church teachings. The outcome resulted in revised statutes approved by the Vatican. Photo courtesy of CNS photo/L’Osservatore Romano

(RNS) The controversial Vatican probe of American nuns that abruptly ended last month looked from the outside like a tense standoff between Rome and the U.S. sisters, punctuated by occasional public jousts that appeared to signal even tougher negotiations behind closed doors.

Not so, say the sisters, now freed to speak out after both sides agreed to a monthlong media blackout that ended Friday (May 15).

Those involved in the talks said that after a rocky start, the discussions settled into a constructive dialogue that cleared up many misunderstandings that Vatican officials had about the sisters.

Church leaders also clarified that the final agreement leaves the Leadership Conference of Women Religious — the umbrella group of U.S. nuns that was the focus of the investigation — free to focus on the work of social justice and theological inquiry that it was doing before.

For example, the LCWR will be free to choose its speakers and honorees at its annual conference without seeking the approval of the Vatican or the U.S. bishops. In addition, the sisters will pick the theologians who will review its materials for orthodoxy — two areas where critics hoped the hierarchy would continue to exert control.

That’s not the result many expected in 2012 when the Vatican, under Pope Benedict XVI, announced that its doctrinal office was taking effective control of the LCWR for at least five years in order to overhaul the group. The LCWR faced accusations of promoting “serious theological, even doctrinal errors,” and of holding annual conferences that featured “a prevalence of certain radical feminist themes incompatible with the Catholic faith.”

“We, along with our members, felt publicly humiliated as the false accusations were re-published repeatedly in the press,” LCWR leaders acknowledged in a statement released Friday, when the blackout expired.

The resolution of that conflict, two years before the five-year mandate was up, “seems sudden and abrupt to a lot of people, but to me at least, it is the end of three years of very intensive dialogue, growth of trust and growth of understanding that made it possible to bring the whole thing to a conclusion,” Sister Sharon Holland, the LCWR’s president, said in an interview.

“We learned again that respectful dialogue over time, really listening to people, speaking honestly, takes a lot longer but it bears fruit that lasts a lot longer,” Holland said.

Bishop Thomas Paprocki of Springfield, Ill., one of three U.S. bishops asked by Rome to direct the LCWR overhaul, told The New York Times that no one wanted to see the process drag on.

“My impression was that everybody involved, from the pope to the congregation officials in the Vatican to the bishops and the nuns, wanted to see this get resolved as quickly as possible,” Paprocki said.

“We were treating one another as fellow Christians, and nobody liked the idea that the outside world saw us as adversaries,” he said.

The LCWR represents about 80 percent of the 50,000 nuns in the U.S.; the network had been in the Vatican’s crosshairs since at least 2008 after conservatives repeatedly complained to Rome that the nuns were fostering dissent, focusing too much on social justice and not giving enough attention to issues such as abortion and gay rights. 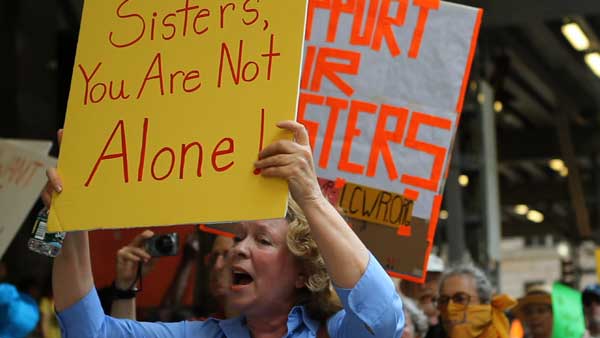 A rally in support of nuns.

The 2012 announcement that the Vatican’s Congregation for the Doctrine of the Faith was effectively seizing control of the LCWR surprised the nuns, as well as many American bishops. It also promoted an outpouring of support among the faithful for the sisters even as tensions appeared to leave the process stalemated.

But Holland, who is vice president of the Sisters, Servants of the Immaculate Heart of Mary in Monroe, Mich., said that in reality “it was long steady progress more than an up and down” process.

“I don’t suppose you expect a conversation of this sort to be all perfectly understood, or it might not (have to) happen in the first place,” she said.

As recently as last September, Cardinal Gerhard Mueller, head of the Vatican’s doctrinal office, was defending the investigation and downplaying the importance of the LCWR and its members.

Holland acknowledged two factors that may have helped pushed the Vatican to end the oversight:

One was the election of Pope Francis in March 2013 to succeed Benedict, who had a reputation for cracking down on perceived doctrinal laxity. As a Jesuit, Francis is a member of a religious order, like the nuns, and he has no love for mandates issued by overzealous Roman investigators.

Holland said she did not know “whether he (Francis) became actively involved or not” in resolving the standoff. But “his election couldn’t have hurt.”

Francis met with the LCWR leadership for an hour when the resolution was announced that month; that was viewed as a sign of support for the sisters — and perhaps relief that he wouldn’t have to confront the issue when he visits the U.S. for the first time in September.

Holland also recognized that her 20 years of experience working in the Vatican as a canon lawyer may have helped “understand the workings of things. Again, it hasn’t hurt. But no one person does it alone.”

Holland repeatedly praised Seattle Archbishop J. Peter Sartain, who led the three-bishop oversight delegation, for his role in serving as a bridge between the nuns and the Vatican. Sartain, she said, “was an enormous help in the communication in both directions.”

Holland said that a key part of the talks involved simply clearing up misinformation that the Vatican had received about the LCWR. The sisters explained, for example, that a priest or bishop celebrates Mass daily as part of their annual conferences and that they also make regular prayer an integral part of their meetings.

The Vatican issued no further statement on the end of the LCWR investigation, and a Vatican official said it was unlikely Mueller would be addressing the matter.

If all this sounds like “win” for the nuns, as it has often been portrayed in media reports, Holland said she avoids that word “like the plague.”

“I don’t believe in saying anybody ‘won,'” she said. “I think the church won.”