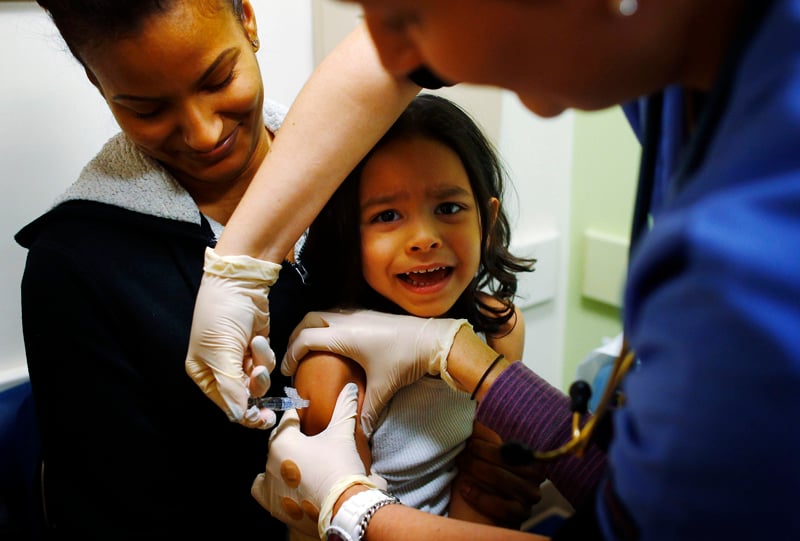 Jayden Mercado, 4, sits in his mother Yariluz Ocasio’s lap while he gets an influenza vaccine at Boston Children’s Hospital in Boston, Massachusetts in this file photo taken January 10, 2013. Photo courtesy of REUTERS/Brian Snyder/Files
*Editors: This photo may only be republished with RNS-VACCINES-NJ, originally transmitted on February 3, 2015.

SACRAMENTO, Calif.  (Reuters) California parents who do not vaccinate their children would have to home-school them under a bill passed Thursday by the state Senate, the latest move in a battle between public health officials and “anti-vaxxers” who fear vaccines are dangerous.

The bill, which eliminates the so-called personal beliefs exemption allowing parents to forego vaccinations if opposed to them for any reason, was introduced after a measles outbreak at Disneyland last year that sickened more than 100 people.

“The personal beliefs exemption is endangering the public,” said Democratic state Sen. Richard Pan, a pediatrician and co-author of the bill. The measure still allows children to attend school without vaccinations for medical reasons.

In recent years, vaccination rates at many California schools have plummeted as parents, some of whom fear a link between vaccines and autism, have declined to inoculate their children against such diseases as polio and measles.

Although the vast majority of children are vaccinated, at some schools, many in affluent, liberal enclaves, vaccination rates are well below the 92 percent needed to maintain the group immunity required to protect those who cannot be vaccinated for medical reasons or who have weak immune systems.

“The alarming increase in unvaccinated students places everyone at risk of contracting potentially fatal diseases,” said state Sen. Ben Allen, a Democrat from Santa Monica, whose father suffered from polio.

Parents who oppose mandatory vaccinations packed committee hearings to testify against the bill, which stalled at one point but was then revived.

Thursday’s vote came after an hour of heated discussion among senators, who voted 25-10, mostly along party lines, to support it.

“It comes down to what do we as a society trade when we mandate that somebody has to do something in order to protect somebody else,” said Senate Republican leader Robert Huff, adding that his family members are vaccinated. The measles outbreak did not rise “to the level where we have to give up personal freedom.”

But Allen said that 400 people die of measles every day in other parts of the world.

“One child who is not immunized is not a big deal,” he said. “But more and more children not receiving vaccines allows for the potential spread of diseases.”

Under the bill, which still must be approved by the Assembly, unvaccinated children who do not have a medical exemption would have to study at home or in organized, private home-schooling groups. (Editing by Eric Walsh)