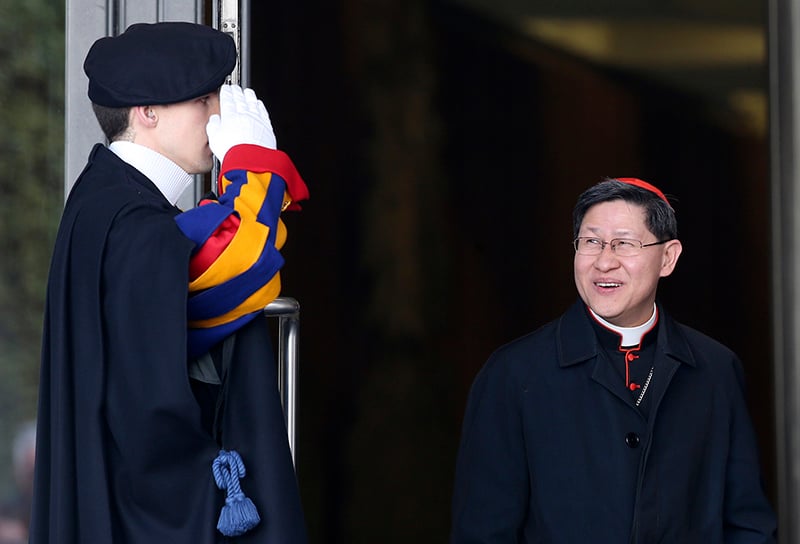 Cardinal Luis Antonio Tagle, right, leaves during a consistory led by Pope Francis at the Vatican on Feb. 12, 2015. Photo courtesy of REUTERS/Alessandro Bianchi
*Editors: This photo may only be republished with RNS-TAGLE-CARITAS, originally transmitted on May 15, 2015.

Tagle, sometimes dubbed “the Asian Francis,” was elected on Thursday (May 14) by delegates attending Caritas’ general assembly in Rome. He is the first Asian president of the organization and takes over from Honduran Cardinal Oscar Rodriguez Maradiaga, another Francis confidant, who served two terms as Caritas chief.

Tagle accepted the post remotely from Chicago, where he was picking up an honorary degree.

“Thank you for your trust. I’m limited in my capacities but with all of you, with the love that Jesus has poured into our hearts and in the name of all of the poor people in the world, I accept this election.

“Let us together strengthen the church of the poor so our witness can help guide us to a world of understanding, justice, true freedom and peace,” he said by phone, echoing Francis’ persistent call to make poverty a priority for Christians around the world.

Although the election of an Asian president is unprecedented for Caritas, the archbishop of Manila was the favorite to take over from his Latin American predecessor. Tagle will inevitably see his already strong international profile boosted by his latest appointment.

Tagle was elevated to cardinal in 2012 under the papacy of Pope Benedict XVI. During the 2013 conclave that elected Francis after Benedict’s surprise resignation, Tagle was considered a dark-horse candidate among the “papabile,” or candidates who could win election.

At a relatively young 57, he is widely seen as a man on the move within the hierarchy, eligible to vote in papal conclaves for the next 23 years.

During the January visit, Tagle acted as the pontiff’s host and watched as a record 6 million people flocked to see Francis celebrate Mass. Despite stormy weather interrupting part of the visit, it was seen as a resounding success and drew attention to the impoverished nation.

Positioning Tagle at the head of the church’s charitable confederation will not only draw further attention to the Philippines, but could also elevate the visibility of Christians across Asia — and Tagle’s own profile.

The world’s most populous country, China, has for decades shunned the Holy See, officially cutting off ties with the Vatican in 1951. During his return flight from Manila, Francis became the first pope to enter Chinese airspace and sent a telegram of well wishes to the Chinese president.

Francis has since said he is willing to both receive Chinese officials at the Vatican and travel to China himself, suggesting a thawing of the diplomatic freeze that may benefit from Tagle’s support.