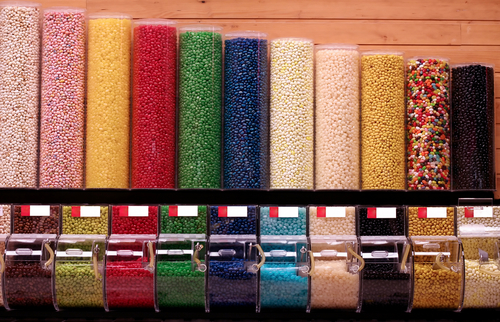 Variety of candy in a store.

SALT LAKE CITY (RNS) While many Utahns have the willpower to avoid alcohol, coffee and tobacco, they just can’t stay away from the candy.

The state buys confections — candy, mints, gum — at the highest rate in the nation, according to sales data from The Hershey Co.

Residents of the Beehive State are especially fond of Hershey’s licorice Twizzlers, said Lisha Bassett, sales manager for Hershey’s Salt Lake City District, which includes all of Utah and parts of Idaho, Nevada and Wyoming.

The red-colored variety is the favorite, she said, but chocolate also is “incredibly popular in our market, which is unique.”

Nationally, about $15,000 worth of candy is sold for every $1 million of total grocery sales, he said.

In Utah, however, $23,000 worth of candy is sold for every $1 million in total grocery sales. That’s the country’s highest percentage, basically making Utah the nation’s sweet-tooth capital.

The Hershey Pennsylvania District — where the national candy company is headquartered — runs neck and neck with Utah, but still takes second place, said Goodpaster. The figures were calculated using 12-month sales data from June 2013 to June 2014.

Glenn Christensen, a marketing professor at Brigham Young University’s Marriott School of Management, has a theory about what drives Utah’s candy sales.

More than 60 percent of Utahns are Mormons, who typically abstain from alcohol, coffee and tobacco. With those vices frowned upon, candy is an acceptable treat, he said, Sweets are ubiquitous at family gatherings and LDS events.

“We don’t drink alcohol, we don’t smoke, we avoid coffee — but we certainly do sugar,” Christensen said. “It’s the only allowed indulgence.”

Utah also has a large population of children — candy’s biggest fans. In 2013, 31 percent of the state’s residents were under 18, while the national average was 23 percent.

Hershey has been taking a closer look at its sales statistics and using them as a guide to “help us determine what to put on the shelf and what to promote” in various parts of the country, Goodpaster said.