WASHINGTON (RNS) John M. Templeton Jr., a pediatric surgeon who left medicine behind to carry on his father’s passion for pursuing “new spiritual information” through the sciences as president and chairman of the Templeton Foundation, has died. He was 75.

Known as “Jack,” the younger Templeton retired as director of the trauma program at the Children’s Hospital of Philadelphia in 1995 to take the foundation reins and became chairman after his father’s death in 2008.

Sir John Templeton Sr. created the Templeton Foundation in 1987 with the fortune he built as the pioneering founder of the Templeton Fund investments in 1954. The foundation provides support for science and medical research and for related research on the “big questions” of human purpose. His often-expressed goal was to “reconcile the worlds of science and religion.”

The foundation is also known for awarding the annual “Templeton Prize” — always calculated to be a higher monetary award than the Nobel Prize — for “exceptional contributions to affirming life’s spiritual dimension.” It has gone to physicists, mathematicians, philosophers and religious leaders such as Billy Graham and Mother Teresa.

The 2015 prize was awarded to Jean Vanier, the founder of L’Arche, serving people with intellectual disabilities, at a ceremony in London held Monday (May 18). News of Templeton’s death on Saturday at his home in Bryn Mawr, Pa., was delayed until after the ceremony.

Templeton, an evangelical Christian, not only inherited his father’s interest in revealing the truth of faith in a scientific world; he inherited the controversies that came with that goal. 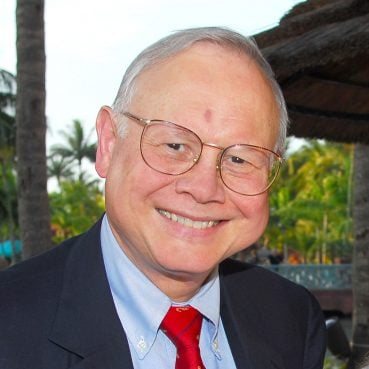 Critics alleged that the foundation’s funding led grant-hungry scientists away from pure research to investigating the impact of spirituality and religion.

Recently, philosopher Daniel Dennett, co-director of the Center for Cognitive Studies at Tufts University and an outspoken atheist, said he would boycott the Templeton-funded World Science Festival next week in New York City. He said  the foundation sponsors “some very fine science with no strings attached and then (uses) their sponsorship of that to try and win prestige for other projects that are not in the same league.”

Supporters, in turn, said the foundation did not steer their research or cook the books on findings.

For example, the foundation publicly reported that a study it funded to investigate the value of people praying for strangers’ health showed that such prayer failed to help patients and may even have had a bad effect on people who were aware of the prayers.

Along with grants in physics, cosmology, genetics and other pure sciences, the foundation has backed studies and projects to foster character and virtue development, genius, gratitude and religious liberty. It also publishes books, including two by Templeton (“Thrift and Generosity: The Joy of Giving” and an autobiography, “John M. Templeton Jr.: Physician, Philanthropist, Seeker”), and an award-winning literary science magazine, Nautilus.

The cause of death was cancer, according to his daughter, Heather Templeton Dill, who has been acting president during her father’s illness. A spokesman for the foundation had no comment on the foundation’s leadership plans.

According to the foundation release, John Marks Templeton Jr. was born on Feb. 19, 1940, in New York City. He received a BA in history from Yale University in 1962 and medical degree from Harvard Medical School in 1968. He began his medical training in pediatric surgery at the Children’s Hospital of Philadelphia in 1973 and returned there in 1977 after serving as a physician in the Navy for two years.

He and his wife, Josephine, a pediatric anesthesiologist, developed a specialty in dealing with conjoined twins. Templeton was director of the trauma program and a professor of pediatric surgery at the University of Pennsylvania before leaving to join the foundation.

Dr. John Schott, a medical school classmate and former trustee of the foundation, said in the release: “Jack’s seeking nature, his interest in purpose, his grappling with the big questions — all made him a superb doctor and made him the best possible head of the foundation.”

Templeton also was an active donor to conservative Republican causes and campaigns. He was a member of Mitt Romney’s “National Faith and Values Steering Committee” during the 2008 campaign. Among Templeton’s honors is the 2006 Canterbury Medal from the Becket Fund for Religious Liberty.

The Los Angeles Times described him as the second-largest donor on record to the successful campaign for Proposition 8, the referendum that banned same-sex marriage in California until the measure was thrown out by the U.S. Supreme Court in 2013.

Templeton is survived by his wife, two daughters, six grandchildren and a brother, Christopher.