BOSTON — Same-­sex marriage is so last decade in Massachusetts. These days, the earliest pioneers in gay and lesbian matrimony are demonstrating how to raise kids, retire — even divorce.

As the Supreme Court wrestles with what Chief Justice John Roberts last month labeled a redefinition of marriage, the couples who successfully challenged the Bay State’s ban on gay marriage in 2003 are juggling work and retirement, raising kids who turn down Ivy League colleges and holding joyful family reunions.

Their “family,” in this case, includes the 14 original plaintiffs in Goodridge v. Department of Public Health and their children — a generation that, according to opponents of same­sex marriage, is bound to suffer from the absence of biological, two­parent, oppositesex
households.

Don’t tell that to Avery Nortonsmith, a high school senior who recently turned down Yale to study computational neuroscience at the Massachusetts Institute of Technology. He’s proud of the role his parents, the former Heidi Norton and Gina Smith, played in the evolution of gay marriage.

“Even though I remember a time when this was new and sort of revolutionary, the idea of having two moms just seems normal to me,” Avery, 18, said last week while spending a sick day at home in Northampton, a liberal bastion in western Massachusetts. “Seeing this happen for me personally has helped give me some faith in the ability of people to affect positive change.”

The Nortonsmiths and their 12 co­plaintiffs celebrated their 11th wedding anniversaries Sunday, the date on which the Massachusetts Supreme Judicial Court allowed gays and lesbians to wed in 2004. But like many of the couples challenging other states’ gay­marriage bans, their relationships date back decades.

Their experiences — in daily living as well as legal wrangling — provide some object lessons as the Supreme Court decides whether to take same-­sex marriage nationwide. A decision on cases pending from Ohio, Michigan, Kentucky and Tennessee is expected in late June. Hillary Goodridge, right, listens as Julie Goodridge talks about her hope for the future in her Boston home. Julie Goodridge and Hillary Goodridge were lead plaintiffs in the Massachusetts court case that eventually led to a 2004 decision allowing same-sex marriage in the state. They are now divorced. Photo by Mary Schwalm, courtesy of USA Today

Julie and Hillary Goodridge had been a couple for nearly two decades when they married on May 17, 2004. Within two years, they were separated. They divorced in 2009.

The media attention, bused-­in opposition and demands on their time played a role in the demise of their marriage. Yet today, the women are close friends who still give each other gifts and finish each others’ sentences.

At the moment they were recruited as lead plaintiffs by Mary Bonauto, a leader of the gay ­marriage movement, Hillary was giving their daughter Annie a bath. They thought nothing of putting their adopted name first on the lawsuit.

Turns out it meant everything. The media descended — “CNN always wanted us in the kitchen, making pancakes,” Julie recalled during a joint interview — as did opponents who sent hate-­filled fliers around their neighborhood in Boston’s Jamaica Plain section.

Even in liberal Massachusetts, state legislators rebelled against the court’s 4­-3 decision, nearly getting enough votes to put a constitutional amendment banning same­-sex marriage on the 2006 ballot. Having won in court, the Goodridges and their co-­plaintiffs still had to win the hearts and minds of the state’s residents and lawmakers.

“We were really out there a lot, and we had a young child and full­time jobs,” Julie Goodridge, 57, recalled. She owns Northstar Asset Management, which advises clients on socially responsible investments; Hillary, 59, directs the Unitarian Universalist Funding Program. which awards social justice grants. “We were stressed.”

Today, Annie is 19, has a boyfriend and is majoring in math at Oberlin College in Ohio, one of the states seeking to have its same-­sex marriage ban upheld by the Supreme Court. Last month, she wrote a column for USA Today recalling that as a 3­-year-­old, she asked her parents, “If you love each other, then why aren’t you married?”

They are divorced now but still joined in parenthood and mutual respect. “It was really important to us that we treat each other well and that Annie be first and foremost,” Hillary Goodridge said. 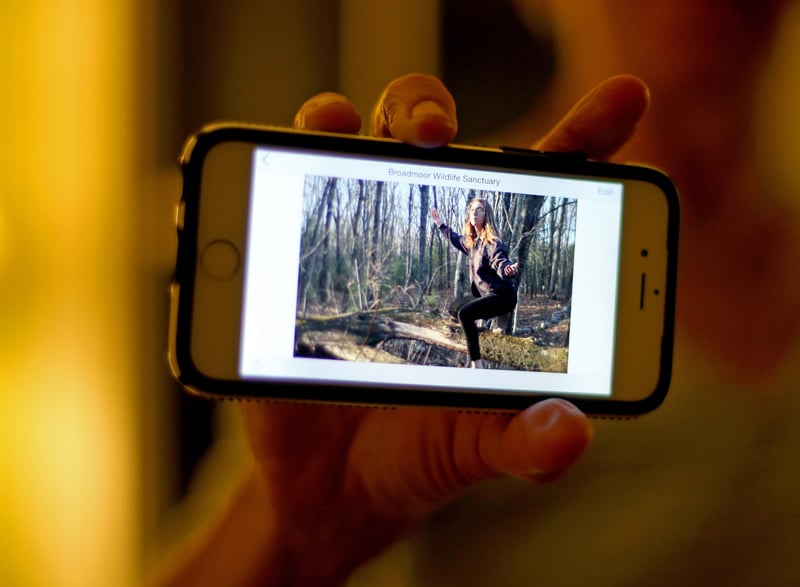 Hillary Goodridge holds out a favorite photo of their daughter Annie jumping over a log at the Broadmoor Wildlife Sanctuary in Natick, Mass. Julie Goodridge and Hillary Goodridge were lead plaintiffs in the Massachusetts court case that eventually led to a 2004 decision allowing same-sex marriage in the state. They are now divorced. Photo by Mary Schwalm, courtesy of USA Today

Rob Compton and David Wilson never could just blend in as a married couple. Compton, 66, is white. Wilson, 71, is black. They both were married to women first. Between them, they have five children.

Because they were centrally located in Boston and had employers who supported them, Compton and Wilson became public faces for the same­-sex marriage movement. Not everyone appreciated what they saw, especially when the couple traveled out of state. They even received a death threat.

“We are a noticeable gay couple,” Wilson said last week while relaxing in Provincetown, the state’s gay and lesbian mecca at the far end of Cape Cod.

“The marriage case opened the door for a great conversation across the country,” Wilson said. “It has helped to shine a light on the areas of discrimination that were not talked about before marriage,” from jobs and housing to bullying that can lead to suicides.

The animosity they encountered while challenging the state’s gay­ marriage ban more than a decade ago has faded, however, replaced by acceptance and even conversion. Now the state’s Republican lieutenant governor, a former opponent, plans to preside at the same­-sex wedding of the state’s Democratic state Senate president.

Couples such as Compton and Wilson played a crucial role in the metamorphosis. “We became the example that refuted all the arguments,” Compton said. “God did not send a lightning bolt. The storm clouds all left.”

Perhaps the best thing that has happened to the nation’s first victorious gay­ marriage plaintiffs is that they are no longer recognized, and their marriages are no longer seen as a big deal.

That’s certainly true for Ellen Wade and Maureen Brodoff, a pair of lawyers who brought the lawsuit over same­sex adoption in the 1990s before joining the gay­ marriage case in 2001.

Today, they live quietly on a leafy cul­de­sac in the Boston suburb of Newton. Their daughter Kate, a graduate of Bates College in Maine, lives and works in nearby Brookline.

Despite being together since 1980, their marriage in 2004 was “a learning experience for everyone we encountered,” Wade recalled last week. But it “became part of the landscape pretty quickly…. The opposition that had been so vocal just faded away.”

As their fame subsided, Brodoff decided to initiate annual reunions, lest the seven couples lose touch with one another. Bonauto, herself married in Maine and raising twin daughters, was invited as well.

At first, the gatherings were held in November to commemorate the Nov. 18, 2003, court ruling. Eventually, they were switched to May, to celebrate the couples’ marriages on May 17, 2004.

This year presents a problem with a ready solution. Brodoff and Wade will be away, so they have delayed the reunion until July — when they hope to have something new to celebrate.

The other couples are looking forward to it. “It’s like a family reunion,” Gina Nortonsmith said, “except without the dysfunction.”