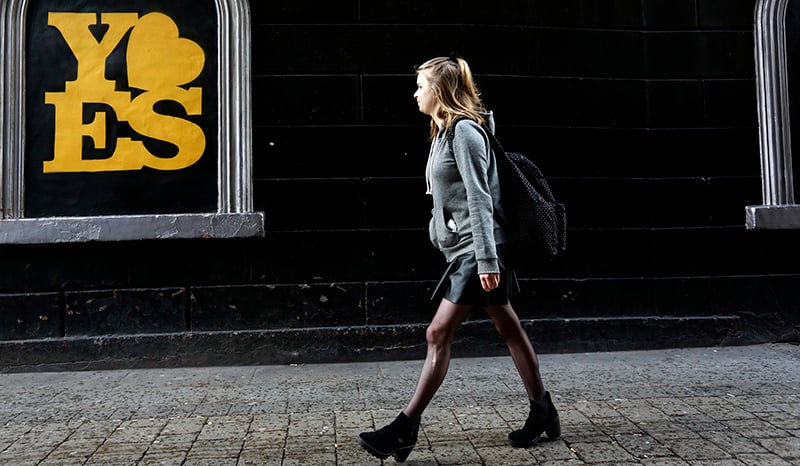 A poster supporting the Yes vote is displayed in the Dame Street area of Dublin on May 19, 2015. Photo courtesy of REUTERS/Cathal McNaughton
*Editors: This photo may only be republished with RNS-IRELAND-AMENDMENT, originally transmitted on May 20, 2015.

CANTERBURY, England (RNS) “In Ireland,” says a character in a 1904 George Bernard Shaw play, “the people is the Church, and the Church is the people.”

But not so much anymore.

On Friday (May 22), voters in this once deeply Roman Catholic country will decide whether the country’s constitution should be amended to allow for gay marriage. If the amendment passes, Ireland will become the first country to legalize same-sex civil marriage by popular vote.

Catholic faith has been faltering among the younger Irish for the last 40 years, undermined, in part, by a series of long-covered-up cases of sexual abuse involving priests and choirboys and altar boys.

In her book ”Goodbye to Catholic Ireland,” Mary Kenny wrote: “The scandals left the people with the feeling that the clerical way of life was in itself an error, and that Catholicism as a system has been seen to fail to practice the virtues it so ardently preached.”

Many Catholics wonder what right the Catholic Church has to oppose gay marriage when those charged with proclaiming and upholding Christian morality were abusing children.

Opinion polls suggest that 78 percent of voting-age Irish favor altering the constitution to allow gay couples to marry. Among them, a few Catholic priests have dared voice support for the amendment, saying they would vote “yes.”

The amendment reads: “Marriage may be contracted in accordance with law by two persons without distinction as to their sex.”

Were it to pass, it would be a heavyweight punch to the body of the church that for centuries governed every aspect of life.

Homosexuality was decriminalized in Ireland in 1993. In 2010, the Civil Partnership Act was introduced. In 2013 the Irish Cabinet agreed to a same-sex marriage referendum.

Equality Minister Pat Carey said that in the urban centers, the gay marriage referendum is getting a good reception. But he added: “A lot of people in middle Ireland and among an older age group still don’t feel comfortable about it.”

Indeed, no ballot initiative can pass in Ireland without significant Catholic votes, and those votes could spell defeat.

Carey came out as a gay man earlier this year, at 67.

“I am sorry I didn’t speak out earlier,” he told the BBC, “but I didn’t have the confidence or the courage.”

Carey now hopes he may soon be able to marry his partner.

Signs of the Times
Six things you need to know about Pope Francis and gay civil unions
News
Vatican and China extend ‘experimental’ agreement on appointment of bishops
News
Amy Coney Barrett nomination fight leaves progressive Catholics feeling unseen
News
Pope, in second TED talk, sides with science on climate change: ‘We have few years’
News
Study: Biden still leads among Latino Christian voters, but Trump’s support has grown
© Copyright 2020, Religion News Service. All rights reserved. Use of and/or registration on any portion of this site constitutes acceptance of our User Agreement and Privacy Policy, Privacy Statement and Cookie Notice. The material on this site may not be reproduced, distributed, transmitted, cached or otherwise used, except with the prior written permission of Religion News Service.