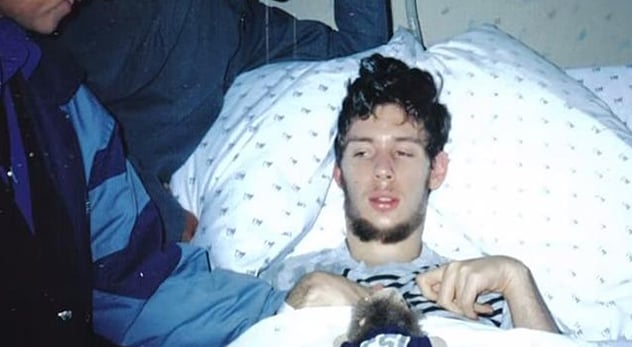 A strange illness sent Martin Pistorius into a vegetative state where, unknown to those around him, he could still perceive and hear levverything around him. A decade later, he emerged to tell the story of faith amid despair. – Image courtesy of Martin Pistorius

After an unknown illness sent him into a vegetative state, Martin Pistorius’ parents were told that their son had less than two years to live. The Pistoriuses plummeted into depression. They had lost their boy before he ever reached adulthood, went to college, or had a chance to wed and have children. Or so they thought.

A decade later, emerging computer technology allowed Martin to communicate that he was still alive, but trapped inside his own body. This allowed doctors to help him return from the darkness and regain his life. His gripping memoir, Ghost Boy: The Miraculous Escape of a Misdiagnosed Boy Trapped Inside His Own Body, shares the consequences of misdiagnosis and what Martin experienced at the hands of abusive caretakers. Sitting in a wheelchair and talking through a computer, he shares how faith sustained him through that dark decade.

RNS: The title of your book is “Ghost Boy.” Explain what this means.

MP: That title expresses that I existed for so many years like a ghost. Invisible. I could hear and see everything, but it was like I wasn’t there.

RNS: During the years you were trapped inside your body, you say you felt God’s presence as your mind knitted itself back together. Explain this.

MP: [tweetable]I don’t know how I came to realize God. He was just always there.[/tweetable] He still is there. I grew up in a Christian home, but we very rarely attended church. This combined with the path my life had taken meant that I never learned the formalities of faith. But I became very close to God. There were many, many times where I felt utterly alone, even if there were people around me. But while a part of me experienced the extreme loneliness and isolation another part of me always felt the presence of the Lord.

Unlike the people around me, God knew I existed. And I knew He existed. I often found myself talking to God. Perhaps one could call them prayers, even though my eyes were open and my hands weren’t pressed together.

RNS: If God was really with you during those years, why didn’t God just help you come back? It seems like you’d be mad at God, no?

MP: Honestly, I’ve never felt angry at God or anything like that. Through everything I went through, I prayed for help, strength and forgiveness for myself and others. I gave thanks for the blessings I had and especially for the prayers answered. Even if they were as small as someone moving my body into a different position that alleviated the pain. It is amazing what you can be grateful for. I truly believe that God played a key role in all the major events that eventually led me to where my life is now; a life truly worth living.

RNS: Some people in your situation talk about meeting angels or seeing Jesus. Do you remember any otherworldly experiences?

MP: There was one moment. It was at night, and I believe I died. In that moment, I felt angels with me, I could feel their presence. But I decided to carry on living because although I wanted to let death overcome me, I knew that my family would have disintegrated if I had gone. I didn’t want that to happen. There were moments later were I regretted that decision, but now I am grateful and happy to be alive.

RNS: While you were trapped, you heard your mother tell you that she wished you were dead. Has your faith played a role in helping you forgive her?

MP: Yes. My mother and my entire family was deeply affected by what happened to me. But my mother in particular really struggled to come to terms with it. For her, it was like her son died when he was 12. So while I was very sad and upset by what she said, I understood where that was coming from. It broke my heart in a way–not so much because what she had said, but because we were in a situation where she felt that everyone would be better off if I wasn’t alive.

I think it is important to remember that at the time I had no concept of religion, the Bible or any spiritual teaching. My relationship with God just was. I can’t explain it, it was just something I felt and knew. I was also a child. I loved my mother with all my heart and felt nothing but compassion for her. While I can only imagine what it was like for her, I could see and appreciate where that was coming from. For me, there was never any doubt or question – I simply forgave her. 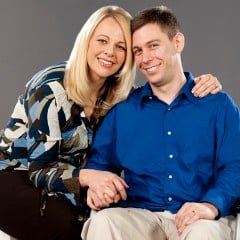 Martin eventually graduated from college and is pictured here with his wife, Joanna. – Image courtesy of Martin Pistorius

RNS: Do you credit God with your improved health and strength now?

MP: Yes, I definitely credit and praise God for my improved health. I believe had it not been through God’s hand I would not be where I am today. If I stop and think about everything that had to happen, and the odds of that happening then there is no doubt in my mind that that could only have happened through divine intervention.

It scares me to think how easily my life could have been very different. I can’t help but think the reason I am still alive and where I am today is because, as it is said in 1 Corinthians 13:12 it is part of a greater plan which I can’t see now.

RNS: But then don’t you have to also credit God with allowing you to languish in that state for so many years?

MP: No, I don’t believe God allows or causes suffering and hardship – that is simply life. I believe that there must be a reason why I am still alive today. I know that God was with me through even my darkest moments, and as I said, even the smallest answered prayer was a true blessing to me. [tweetable]I may be in a wheelchair and only speak through a computer, but I am who I am, and I’m okay with that.[/tweetable] I don’t really dwell on the past or even really think about it; I live and enjoy life as much and as best I can.

RNS: Sum this up for us. What did this experience teach you about the co-existence of God and suffering?

MP: That God is always there and despite all the dark moments, hardship and suffering he will never forsake me. For me, God is a God of love and a constant companion through good and bad times. It felt to me that no matter what happened, we would face and overcome it together. I would also say that going through difficult moments helps you to be grateful and thankful all the blessings you have.