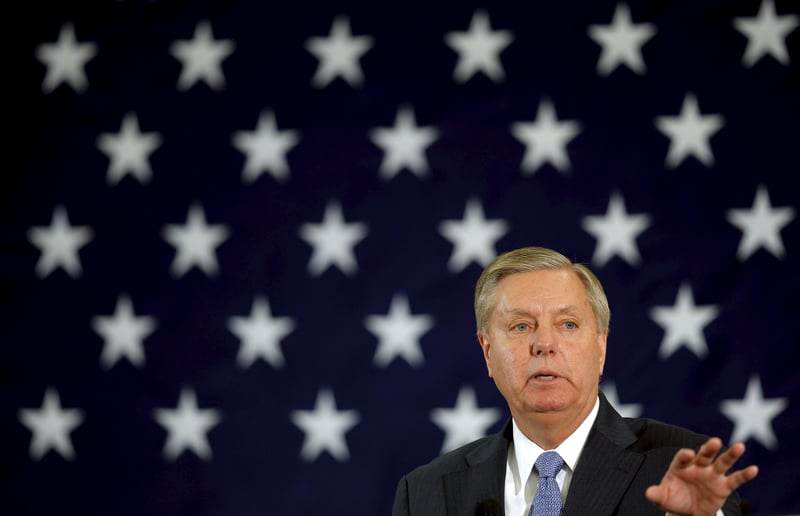 Potential Republican 2016 presidential candidate U.S. Senator Lindsey Graham, R-S.C., speaks at the First in the Nation Republican Leadership Summit in Nashua, N.H., on April 18, 2015. Photo courtesy of REUTERS/Brian Snyder
*Editor: This photo may only be republished with RNS-GRAHAM-FAITH, originally transmitted on June 1, 2015.

During the campaign season, Sen. Lindsey Graham bows to no one in zealous defense of his version of religious liberty from a conservative Christian perspective.

When the Senate debated the Iran nuclear deal, Graham was in the fray, saying there are “religious Nazis running Iran” and excoriating President Obama for showing “weakness”  toward them.

His polling numbers have been so low, however, that he was not included in the first two main-stage GOP debates but rather relegated to the minor league debate staged earlier that day. Hence, he’s not on record with the Fox New question from the first debate on how God might have a word for him in the Oval Office.

He’s as conservative in his politics as he is in his Southern Baptist beliefs. The 60-year-old senator worships at Corinth Baptist Church, in Seneca, S.C., founded in 1884.

Here are 5 faith facts about Graham:

1. Graham was educated in his parent’s pool hall and at church.

“Everything I know about politics, I learned in the pool room,” Graham told a group of New Hampshire business leaders earlier this year, explaining his distrust of the Iranian nuclear deal, according to the Lexington Herald-Leader.

And much of what he knows of life, he learned in church, where the paper describes him sliding into the sanctuary as the service begins and slipping out quietly before the final prayer.

Graham, a member of the Senate Committee on Appropriations, told Tony Perkins of the Family Research Council in a radio interview that he wants to create “a separate stand-alone section within our foreign assistance budget to deal with religious liberties.”

He likened the Islamic State group to Hitler, and told Perkins, “the world must stand up to stop religious genocide going on before our eyes.”

Graham, a 30-year veteran of the Air Force who announced last week his retirement as a colonel in the reserves, said the U.S. is in “a religious war with radical Islam.” The Islamic State is “compelled by religious doctrine, their view of God,” to murder and maim Christians and destroy the state of Israel, Graham said.

In 2014 Graham earned a 100 percent rating from the National Right to Life Committee.

But that might shift in the wake of his vote to confirm Attorney General Loretta Lynch. At her confirmation hearing, he pointed out that although she had once signed a friend-of-the-court brief supporting Planned Parenthood in a court battle over partial-birth abortion laws, he would vote for her confirmation anyway. This grew a rebuke from Live Action News, an anti-abortion blog, clubbing him for “pandering and posturing” toward moderates and running for “Mr. Congeniality.”

4. On church and state, he walks a fine line.

In a radio interview, Graham said creating legislation that will protect religious freedom “and at the same time not discriminate against same-sex couples is a very complicated endeavor for a democracy.”

Graham went on to say, “The one thing I will not tolerate is a national religion, even though I am a Christian, because that is counter to what we are as a people. …The strength of this nation is that people can worship God on their own terms.”

Still, he has been rebuked by Theocracy Watch, a website devoted to combating the religious right, for pushing legislation in 2004 that “includes the acknowledgment of God as the sovereign source of law by an official in his capacity of executing his office.”

5. He’s a zealot when it comes to defeating Hillary Clinton.

As more and more candidates enter the primary race, Graham and all the contenders share one near-religious fervor: Beat Hillary Clinton, the presumptive Democratic nominee.

Spiritual Politics
Americans are as divided as ever, and religion is the wedge

Faith
Robert Lesslie, slain doctor, saw ‘Angels in the ER’ and wrote hopeful stories of faith in tragedy
Follow us on Facebook!
Submit your photos to RNS