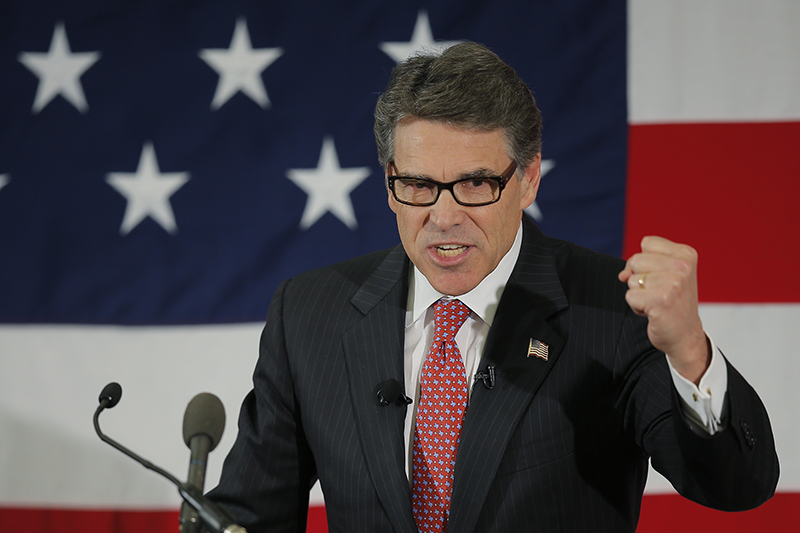 Former Texas governor and probable 2016 Republican presidential candidate Rick Perry speaks at the First in the Nation Republican Leadership Conference in Nashua, New Hampshire on April 17, 2015. Photo courtesy of REUTERS/Brian Snyder *Editors: This photo may only be republished with RNS-PERRY-FAITH, originally transmitted on May 6, 2015.
June 4, 2015
Kimberly Winston

Former Texas Gov. Rick Perry speaks at the First in the Nation Republican Leadership Conference in Nashua, N.H., on April 17, 2015. Photo courtesy of REUTERS/Brian Snyder *Editors: This photo may only be republished with RNS-PERRY-FAITH, originally transmitted on June 4, 2015.

(RNS) Former Texas Gov. Rick Perry threw his Stetson into the already very crowded race for the Republican presidential nomination on June 4, 2015. Here are five faith facts about the man.

Perry grew up in Paint Creek, a pinhole-size Texas town with two churches -- a Southern Baptist and a Methodist church. Perry's family was active in both in the 1950s and 1960s but maintained membership in the United Methodist Church, the nation's largest mainline Protestant denomination.

When Perry and his wife, Anita, moved to Austin in the 1980s, they attended Tarrytown United Methodist Church -- the same church George W. Bush and his family attended when Bush was the Texas governor. The Perrys served Communion there, taught confirmation classes and entered their children in confirmation classes. But in 2007, the Perrys moved to Lake Hills Church, an Austin megachurch with an evangelical message.

3. In the 2012 election, Perry was perhaps the most overtly Christian in his rhetoric.

“America is going to be guided by some set of values -- the question is going to be whose values,” he said in a 2011 speech at Virginia’s Liberty University, founded by the late evangelical power broker Jerry Falwell. “I would suggest … it is those Christian values that this country was based upon.”

And more famously, Perry has said he feels he became Texas' longest-serving governor and a two-time presidential candidate at the direction of God.

“I’d been called to the ministry,” he said in his 2012 stump speech. “I’ve just always been really stunned by how big a pulpit I was going to have. I truly believe with all my heart that God has put me in this place at this time to do his will.”

Called "The Response," the 2011 rally drew 30,000 people to a National Football League stadium in downtown Houston and raised a whole lot of support for the governor from national evangelical leaders.

"The prayer event created a major political opportunity for Perry," Dan Gilgoff wrote for CNN in 2011. "Intense media coverage allowed him to broadcast his Christian commitment to a national audience just one week before formally launching his presidential campaign."

In 2014, in a private ceremony involving just friends and family, Perry was baptized in the chilly waters of Little Rocky Creek near Independence, Texas. It was the same creek Sam Houston, the president of the Republic of Texas (go look it up), was baptized in in 1854. After Perry's dunking, the Texas Tribune speculated it may have been some sort of personal preparation for the rigors of the 2016 election. Afterward, Perry visited the small historic church Houston attended with his wife, Margaret Lea, and played a hymn on the old foot-pumped pipe organ.

It's a hard one to forget. In a 2012 debate against other Republican hopefuls, Perry could not remember all three government agencies he planned to eliminate if elected. "I would do away with the education, the um, Commerce, and let's see. I can't think of the third one. I can't. Sorry. Oops," he said. His campaign was already faltering, but that was a full-face flop.