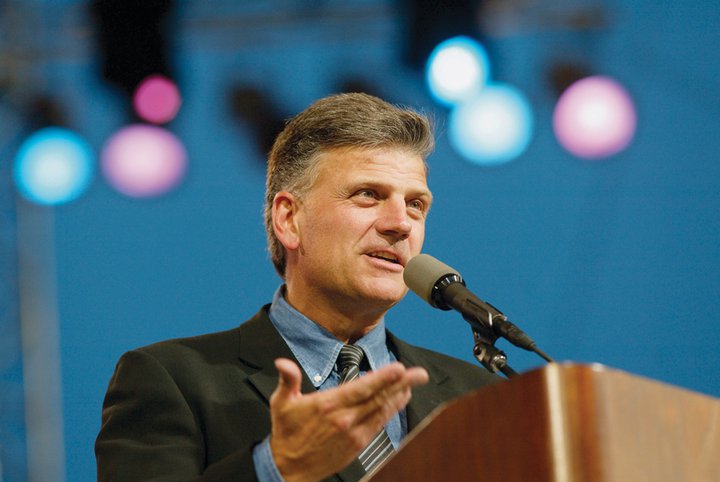 UPDATE: According to Ring Wing Watch, Graham plans to switch banks to BB&T. Apparently, Graham didn't check to see BB&T's stance on LGBT equality. The bank has an 80% on the Human Rights Campaign Corporate Equality Index and has even hosted a same-sex wedding reception earlier this year.

Franklin Graham had a revelation. On Friday, Graham said it has “dawned” on him on how to “fight the tide of moral decay that is being crammed down our throats by big business, the media, and the gay & lesbian community.”

“Every day it is something else! Tiffany’s started advertising wedding rings for gay couples. Wells Fargo bank is using a same-sex couple in their advertising,” Franklin said on his Facebook.

“And there are more. But it has dawned on me that we don’t have to do business with them….. This is one way we as Christians can speak out—we have the power of choice. Let’s just stop doing business with those who promote sin and stand against Almighty God’s laws and His standards. Maybe if enough of us do this, it will get their attention.”

Indeed, if Christians were to pull out their funding from all companies that support LGBT equality it would certainly get some attention. However, it’s not as easy as it sounds.

The irony of Graham posting this on Facebook is apparently lost on him. Facebook is vehemently pro-LGBT and Graham’s post, which has been shared almost 40,000 times, creates revenue for the social media platform.

Still, he’s putting his money where his mouth is. On Twitter, he announced that The Billy Graham Evangelistic Association (BGEA) will be moving their accounts from Wells Fargo to another bank due to the bank's pro-LGBT ad.

I support Graham’s decision to not fund pro-LGBT companies. It’s an important part of the free market for individuals to boycott individuals or organizations that do not align with their beliefs.

I support him enough to want to help him out. Here are just a few other companies who are LGBT-friendly, which he, and those who think like him, might avoid.

BGEA is looking for anti-LGBT, or at least neutral, banks. I don’t suggest Chase, Citigroup, or Bank of America all of scored 100 percent in the Human Rights Campaign’s (HRC) Corporate Equality Index.

The Corporate Equality Index is measured by an organization’s inclusion of sexual orientation and gender identity in their non-discrimination policies, domestic partner health benefits, transgender inclusive benefits, organizational competency practices, and their public commitment to the LGBT community.

So far, in 2015, 14 of the Top 20 Fortune Ranked companies received 100 percent ratings by HRC including Apple (throw out those iPhones!), AT&T (switch to Verizon?), Verizon Communications (or don’t), and Hewlett Packard co. to name a few.

Other pro-LGBT companies include:

Those are just a few, and according to HRC’s report, every year more organizations get closer to that 100 percent rating.

If he's looking for national companies that have a zero rating, that's going to be close to impossible. To only support companies that are against LGBT equality, he'll have to look at mom and pop shops in the 33 states that currently allow discrimination on the basis of sexual and gender identity.

Soon, Graham might have to stash his cash under his mattress, send smoke signals, and grow his own food.