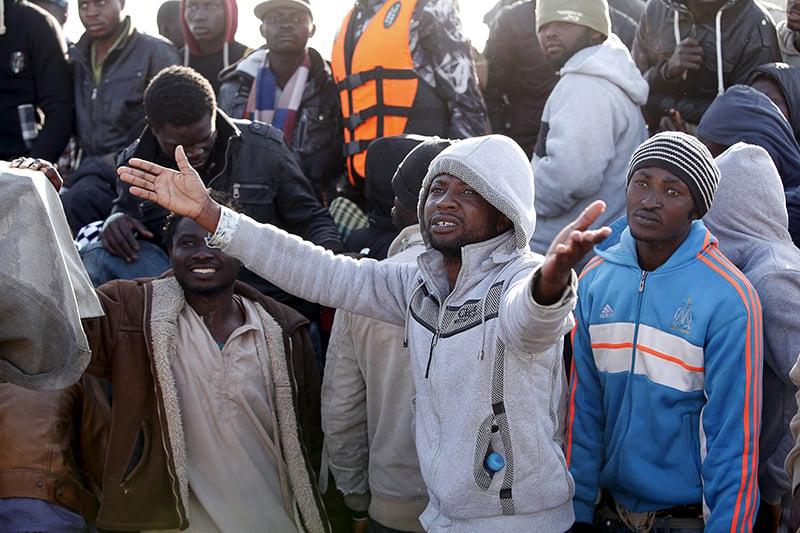 A migrant reacts next to others after their boat was sent back by the Libyan navy to the coastal city of Misrata on May 3, 2015. Nearly 5,800 migrants were plucked from boats off the coast of Libya and 10 bodies were recovered in less than 48 hours, Italy’s coast guard said, in one of the biggest rescue operations this year. Libyan state news agency Lana said authorities there detained 500 migrants in five boats off Tripoli and another 480 migrants — from Sudan, Somalia, Eritrea and Ethiopia — were caught in a farm near the central town of Jufra. An additional 170 were detained nearby. Photo courtesy of REUTERS/Ismail Zitouny
*Editors: This photo may only be republished with RNS-ERITREA-UN, originally transmitted on June 10, 2015.

(RNS) Eritrea, a country in the Horn of Africa known for having the second-largest number of migrants crossing the Mediterranean, after Syria, is committing serious religious freedom abuses, according to a U.N. investigation.

The religious abuses are among a host of widespread human rights violations that are forcing Eritrea’s citizens to undertake deadly voyages to Europe through North Africa, the U.N. Commission of Inquiry on Human Rights said.

Islamic State militants who control parts of Libya have grabbed Christian migrants passing through the country and are posing the biggest danger to fleeing Eritreans.

Early this year, the militant group kidnapped and later killed 21 Egyptians and 28 Ethiopians.

“They (captives) were coming from Eritrea and they were escaping from a very difficult situation,” said Open Door USA President David Curry in a June10 statement.

“All religious communities and their members are nevertheless to varying degrees targeted by restrictions and attacks by the government,” the U.N said.

The Eritrean government dismissed the report as unfounded and devoid of merit.