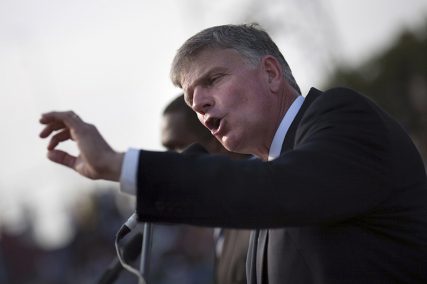 Franklin Graham, son of evangelist Billy Graham, addresses the crowd at the Festival of Hope, an evangelistic rally held at the national stadium in Port-au-Prince, on January 9, 2011. Photo courtesy of REUTERS/Allison Shelley

The Billy Graham Evangelistic Association did not decide to move our ministry bank accounts from Wells Fargo simply because the San Francisco-based bank is “gay-friendly.” Indeed, the bank we transferred our accounts to — BB&T based in Winston-Salem, N.C. — is also widely considered gay-friendly. In fact, it may surprise some to learn that I think every business should be gay-friendly. By that I mean businesses — like individuals — should be friendly to gay customers and citizens. We should be friendly to everyone, even if or when we disagree with them.

Both of these national banks rank high on the Human Rights Campaign’s Corporate Equality Index — the organization’s ranking of businesses according to workplace equality for lesbians, gays, bisexuals and transgender people. So why did we move from one bank to the other? Because, in our view, Wells Fargo went beyond being gay-friendly to being a public advocate — through a national TV advertising campaign — for a lifestyle we, as a Christian organization, believe to be biblically wrong. (The ad featured a lesbian couple with their adopted child.)

Now, I realize our critics will be quick to point out three things: that our new bank, BB&T, has sponsored a Miami Beach Gay Pride fundraiser; that Wells Fargo was not advocating but merely targeting a segment of the general population for business; and that switching banks for this reason does not seem very gay-friendly.

It is true that a local BB&T branch in the Miami area hosted a fundraiser for a program called Legacy Couples, which recognizes same-sex couples who have been in committed relationships for 10 years or more, but the bank did not promote this program through a national advertising campaign (or we would still be looking for another bank).

As for the second criticism, if Wells Fargo had run a TV ad featuring a faith-based crisis pregnancy center, I am certain some “pro-choice” customers would object to the bank’s advocacy of a position or organization they disagree with. In a free market economy these things work both ways — as they should. We saw that in 2012 when LGBT activists called for a boycott of Christian-owned Chick-fil-A over the restaurant chain owner’s personal views on same-sex marriage. Meanwhile, half a million others rallied in support of the company, giving it its single-best day of sales in company history and an overall record year.

I think there is a difference between being friendly and being a public advocate. By staying at Wells Fargo, we would not only be associating with the promotion of a lifestyle we believe to be wrong, we also would actually be helping to pay for the advertisements by virtue of banking with them — because a bank has no money to advertise with other than the money its customers place in its trust and the interest earned on that money. We simply chose not to continue doing business with a bank that is promoting something that violates our conscience and beliefs.

Third, being gay-friendly is not optional — especially for those of us who call ourselves Christians. Jesus himself issued an ultimatum in the New Testament Gospel of John: “A new commandment I give to you, that you love one another: just as I have loved you, you also are to love one another.” By the same token, we are not called upon to accept or endorse anything that runs contrary to what Scripture teaches, which means we can oppose a TV ad promoting a home with an adopted child and lesbian parents while still loving those represented in the ad.

Finally, while I believe millions of Americans share my views on this matter and my beliefs about same-sex marriage, I also realize, based on polls and trends (and a pending Supreme Court decision), I might soon find myself in the minority. Even so, my position is not based upon polls or trends, political winds or Supreme Court wisdom. It is based upon God’s word, the Holy Bible written more than 2 thousand years ago, and that document is not subject to amendment or revision.

Franklin Graham is the CEO of the Billy Graham Evangelistic Association. This article first appeared in USA TODAY.