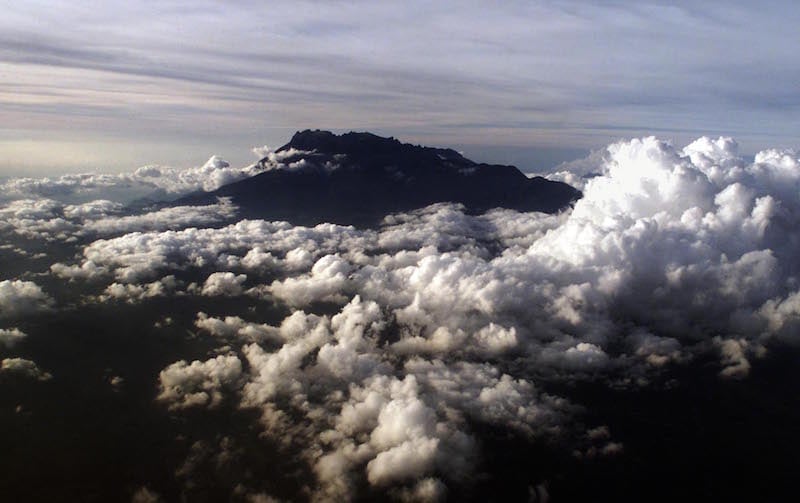 Mount Kinabalu appears through the clouds over Kota Kinabalu, capital of the east Malaysian state of Sabah on Borneo island, in this 2002 aerial photograph. Known as "aki nabalu" or "home of the spirits of the dead" to the Kadazan Dusun locals, Kinabalu is Southeast Asia's highest mountain, standing at 13,435 feet. REUTERS/Bazuki Muhammad
June 12, 2015
Trevor Grundy

Mount Kinabalu appears through the clouds over Kota Kinabalu, capital of the east Malaysian state of Sabah on Borneo island, in this 2002 aerial photograph. Known as "aki nabalu" or "home of the spirits of the dead" to the Kadazan Dusun locals, Kinabalu is Southeast Asia's highest mountain, standing at 13,435 feet. REUTERS/Bazuki Muhammad
BM/JD - RTR2D5S

CANTERBURY, England (RNS) A 23-year-old British backpacker who stripped naked and then urinated on a mountain held to be sacred by local villagers has been sentenced to three days imprisonment and fined $1,396 by a court in Kuala Lumpur.

Eleanor Hawkins, from Derby, was in the middle of a post-university gap year traveling around Southeast Asia.

In Malaysia, she and three other young people -- Canadian siblings Lindsey and Danielle Petersen and a Dutch traveler, Dylan Snel -- had climbed part of the 13,435-foot Mount Kinabalu in Borneo when they decided to strip their clothes and shoot a picture.

In court they admitted to urinating on the mountain and swearing at a guide who told them to respect the mountain because local people have strong religious beliefs that it is where their ancestors reside in the afterlife.

Soon after this incident, an earthquake struck.

Eighteen people, including children, were killed on June 5, and hundreds more were stranded.

Because the four backpackers were already in custody, a judge ruled that their punishment had been served and ordered them to be deported.

Earthquakes are unusual in the Malaysian state of Sabah, where Mount Kinabalu is located.

Sabah’s deputy chief minister Joseph Pairin Kitingan told reporters: "It is a sacred mountain. We have to take this as a reminder that local beliefs and customs are not to be disrespected."

Jamil Aripin, a prosecutor, said there was no link between the earthquake and the stripping but said it had outraged the local community.

"This is a wake-up call,” said Rita Payne, president of the Commonwealth Journalists Association. “Students, journalists, backpackers should all show respect to the culture and religious beliefs of other people and stop thinking that what's acceptable in their own country is acceptable everywhere else. It's not.”