CAPE TOWN, South Africa (RNS) In 1996, South Africa became the first country to approve a constitution explicitly prohibiting discrimination on the basis of sexual orientation. Though progressive, the law has done little to prevent homophobic violence in the country’s impoverished townships, according to a new documentary.

The documentary “African Pride” made its South African debut in April. In it, Irish filmmaker Laura Fletcher shows how black lesbians and allied activists are rallying for their rights and memorializing their murdered sisters.

“Having done that for a year, I decided to stop preaching, put my money where my mouth is, and create a documentary,” she said.

Fletcher’s film details the unique economic, racial, gender and faith-based challenges facing black lesbians in South Africa’s townships. Rather than emphasizing the women as victims, Fletcher highlights how they are fighting violence and discrimination with grass-roots activism.

In a scene from the township of KwaThema, activist Ntsupe Mohapi confronts a man who shouts, “What’s this LGB what what what?  No my friend, this is against the Bible. This is abomination.” A march in KwaThema township east of Johannesburg on September 17, 2011. Photo by Melanie Hamman Doucakis, courtesy of Laura Fletcher

“Those are the kind of people we need to have dialogues with,” Mohapi says in the film. “He says he’s a believer, a Christian, which I am also, so I don’t see a problem.”

Mohapi sees no theological problem in being a lesbian, but says, “it’s not good living in a township as a black lesbian. It’s dangerous. You still can’t hold hands with your partner. There are some places you can’t go … so you find that your freedom is a bit limited,” she said.

The comments of several men, not identified by name in the film, show that Mohapi’s fears are well-founded.

“African Pride” documents the murders of several South African lesbians between 2006 and 2011, among them Zoliswa Nkonyana and Noxolo Nogwaza.

Nkonyana was stabbed and stoned to death in Khayelitsha, Cape Town’s largest township, in 2006. In 2012, four men received prison sentences for her murder, the first time a South African court acknowledged that a victim had been murdered because of her sexual orientation. Nogwaza was raped, stoned and stabbed to death in 2011 in the KwaThema township east of Johannesburg. 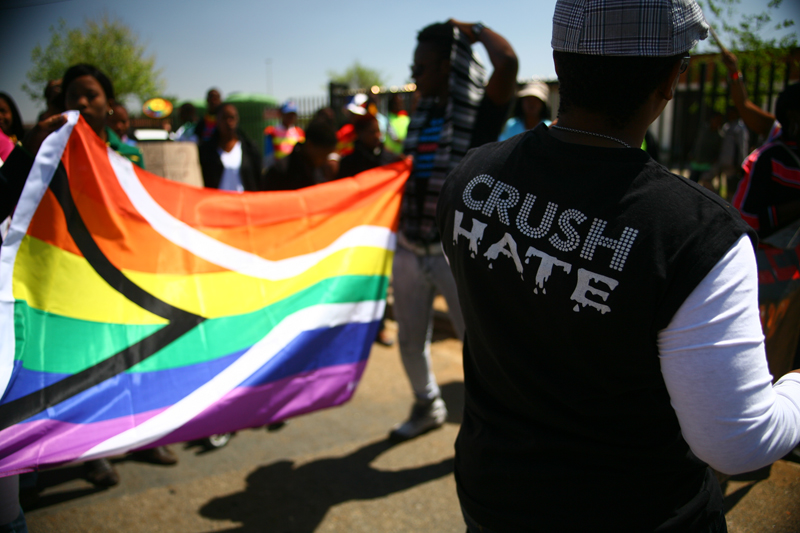 A march in KwaThema township east of Johannesburg on September 17, 2011. Photo by Melanie Hamman Doucakis, courtesy of Laura Fletcher

More than 20 LGBT people have been murdered in South Africa because of their sexuality or gender identity since Nogwaza’s death, Fletcher said.

In the face of such violent attacks, local community organizers and activists continue to challenge the notion that being LGBT is un-African, against the will of God, or some kind of colonial hangover.

Patrick Godana is the government and media manager at Sonke Gender Justice and an ordained Lutheran priest in Cape Town.

“All forms of violence we are against, but this one is extraordinary, because of the issue of hatred and ignorance,” Godana said.

Godana is just one of the many LGBT-affirming ministers Fletcher came across in producing her film. The vast majority of activists she met were also Christian, South Africa’s dominant faith.

“Despite the language used to target them, they haven’t let that interfere with their own set of personal beliefs, they just counter it,” Fletcher said of the LGBT activists she interviewed.

“This ‘un-African,’ ‘un-Christian’ language is pervasive, but often it’s American money that’s perpetuating the idea that homosexuality is against the will of God. That’s definitely un-African,” she added, referencing allegations that American missionaries in some parts of the continent bear some responsibility for inciting homophobic violence. 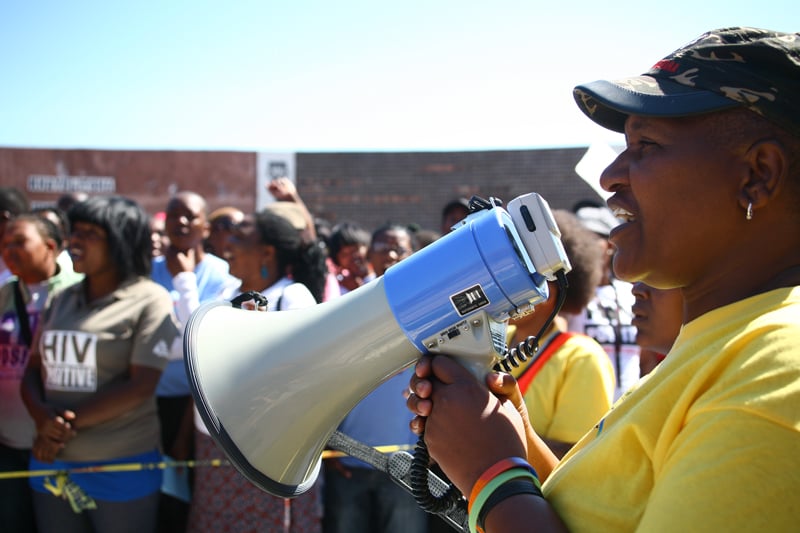 Fletcher screened “African Pride” in KwaThema on April 24, the four-year anniversary of Nogwaza’s murder. About 200 people, including members of Nogwaza’s family, attended the viewing.

A scene near the end of the film shows a homemade sign bearing Nkonyana’s photo and the caption “your death sparked our fight against hate.”

“All these years she’s been helping us fight,” said Funeka Soldaat, founder of the Khayelitsha-based advocacy group Free Gender. I think now she just needs to rest in peace.”

For Nogwaza, whose murder remains unsolved, the fight continues.

The next screening of ‘African Pride’ in South Africa will be on June 24 at the Open Dialogue on Racism, Racial Discrimination, Xenophobia and Related Intolerance at Constitution Hill in Johannesburg. Amnesty International will host a screening on June 25 in London.