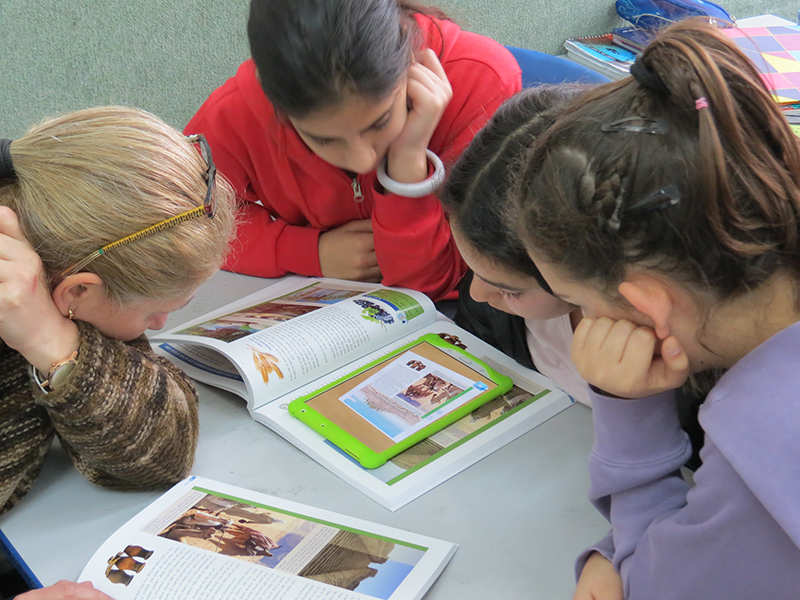 Students gather around a tablet screen overlaid onto the hardcopy curriculum textbook. Photo courtesy of Museum of the Bible
June 15, 2015
Michele Chabin

Students gather around a tablet screen overlaid onto the hardcopy curriculum textbook. Photo courtesy of Museum of the Bible

JERUSALEM (RNS) Students at 16 Israeli high schools are completing a yearlong pilot program developed by the Washington-based Museum of the Bible, funded by the billionaire Green family, owners of the Hobby Lobby craft store chain.

Hobby Lobby President Steve Green founded the Museum of the Bible to showcase his family’s vast collection of rare Bibles and biblical artifacts. The 430,000-square-foot building three blocks from the U.S. Capitol is expected to open to the public in 2017. The Greens, who are prominent evangelicals, are also known for winning a 2014 Supreme Court case that exempted their chain store from the Affordable Care Act’s contraception mandate. Museum of the Bible Board Chairman Steve Green, with one of the more than 44,000 rare biblical texts and artifacts his family began collecting in 2009. Green has assembled a team of academics, designers, technology professionals and other experts to create a museum dedicated to a scholarly and engaging presentation of the impact, history and narrative of the Bible. The museum is scheduled to open in Washington D.C., in fall 2017. Photo courtesy of Museum of the Bible

But the first launch of the museum's ambitious Bible curriculum didn't go so well.

Last year, an Oklahoma school district shelved a similar curriculum after the ACLU, Americans United for Separation of Church and State and the Freedom from Religion Foundation filed a freedom-of-information request to determine the school board's role in developing and approving the curriculum.

The district's superintendent said the body had dropped the course because it had not received access to the entire final curriculum and feared the civil liberties groups would file suit against it.

The Israeli curriculum, which was already in the works by the time the Oklahoma curriculum was nixed, was tailor-made for Israel's publicly funded secular Jewish school system, and contains no Christian content, according to the museum and Israeli educators.

The Israeli government requires all Jewish schools to teach the Hebrew Bible to their students. High school matriculation exams include biblical literacy and comprehension.

Created in partnership with Israel-based technology company Compedia and vetted by Israel's Ministry of Education, the two-volume course is taught with iPads that the museum supplied to all the students. The museum, and by extension, the Green family, spent millions of dollars developing the program.

Its cutting-edge computer graphics and 3-D animation are intended to make biblical stories come alive for Israeli teens, who study the Bible in the original Hebrew.

Nadavi Noked, who taught TAMAR (a Hebrew acronym for Bible and augmented reality) at the Bliech High School in Ramat Gan, said the program has the potential to encourage students to explore what in non-Orthodox Israeli circles “can be a slightly unpopular subject given the emphasis on math, science and computers."

Traditional Bible study, Noked said, “is a very text-based, very black-and-white subject. TAMAR approaches the text through layers and layers of information that the students discover, making the Tanakh (the Hebrew term for the Bible) more relevant to their lives.”

When studying the Israelites' journey through the desert after fleeing Egypt, for example, the students utilized modern technology, such as GPS and mapping, to explore where and why the Israelites may have chosen one route over another. 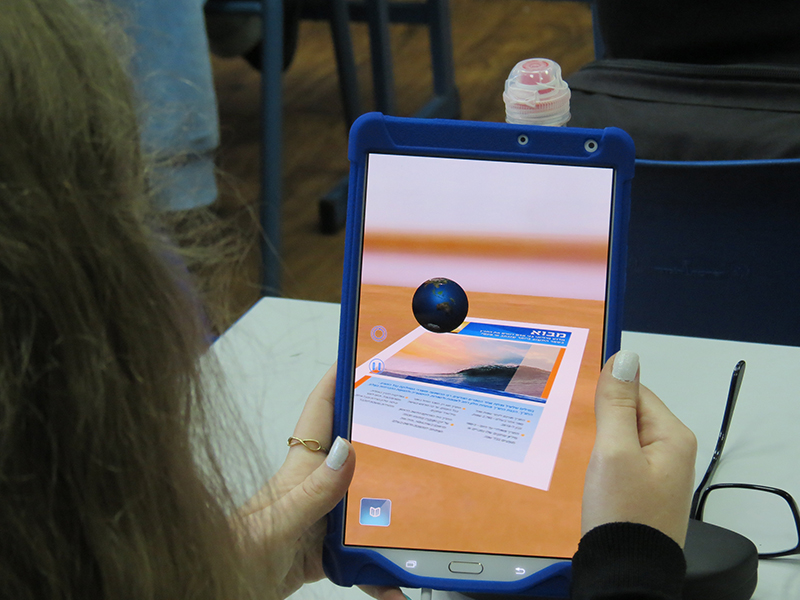 A student tinkers with augmented reality technology on her tablet, pointing the camera over the printed textbook and watching the pages come to life. Photo courtesy of Museum of the Bible

But the curriculum also emphasizes the Bible’s influence on law and government. In a promotional video for the pilot, a teacher demonstrates to the Israeli students the Bible's reach by having them identify a biblical quote from the prophet Micah that is engraved in stone at the Library of Congress.

“You see where the Bible connects to the legislature of the United States,” the teacher says, noting that the U.S. government, which had numerous quotes to choose from, chose this biblical verse to model how the country's legislatures should behave.

The emphasis on the Bible's influence is part of a broader push in some evangelical  circles to promote the notion that America's earliest leaders were deeply shaped by the Bible, and that governance and the Bible should not be mutually exclusive.

Noked called the curriculum “a very positive experience. It's made Bible study more interesting, more relevant. The combination of ancient texts with modern technology has created a new learning experience that our students relate to.”

Jerry Pattengale, the Museum of the Bible's executive director of education, said that during the museum's assessment visits to schools using the Israeli program, “teachers and students showed enthusiastic appreciation for the curriculum and its innovative engagement in learning.”

The Israel program, he said, “will help the museum improve its educational offerings for students and teachers from around the world who are interested in high-quality, engaging courses about the Bible.”

Based on the pilot, said Pattengale, who also sits on the board governing Religion News Service, Israel's Ministry of Education has approved the curriculum's use for other Jewish schools in the country.