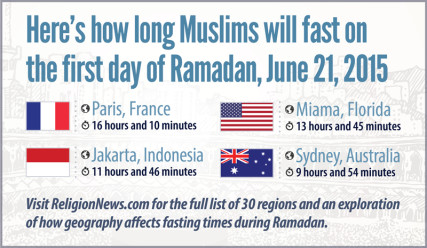 “Here’s how long Muslims will fast on the first day of Ramadan, June 21, 2015.” Religion News Service graphic by T.J. Thomson

(RNS) When the Islamic fasting month of Ramadan begins later this week, some Muslims around the world will face bigger challenges than others. The Quran is clear that the fast should last from before dawn to after dusk but says nothing about how many hours that might be.

Since Islam has spread from its Arabian heartland to the far reaches of the Earth, Muslims who live farther north must fast several hours longer than those in Mecca. On the year’s longest day,  June 21, some could end up fasting for as long as 20 hours.

Usama Hasan, a British Islamic scholar, thinks this makes Ramadan fasting unbearable for many Muslims living in Northern Europe and Canada, especially the old and children just beginning to observe the practice. It also prompts many Muslims to give up fasting altogether during the summer, he said, or sneak a secret snack to help them get through the long days.

The former imam thinks this should change and has issued a fatwa, or religious ruling, calling for “moderate timings” to be accepted for those who need them.

“In midsummer, the fasts are too long,” Hasan said on BBC television on Sunday, just days before Ramadan is expected to start there on Thursday (June 18).

“We are closer to the North Pole than to the equator,” he added. “Muslim jurists for centuries have argued that you can reduce the fasting hours to something like you have in Mecca, 12 to 14, 15 to 16 hours maybe, but no longer. I think that’s very sensible; it’s a balanced approach which British Muslims should adopt.”

Not all of Britain’s 2.8 million Muslims agree. A BBC reporter at Friday (June 12) prayers found almost all Muslims at that mosque preparing to face the long hours. Comments on Hasan’s blog, where he last year quietly posted the fatwa he is now promoting in public, include several flatly rejecting his ideas. 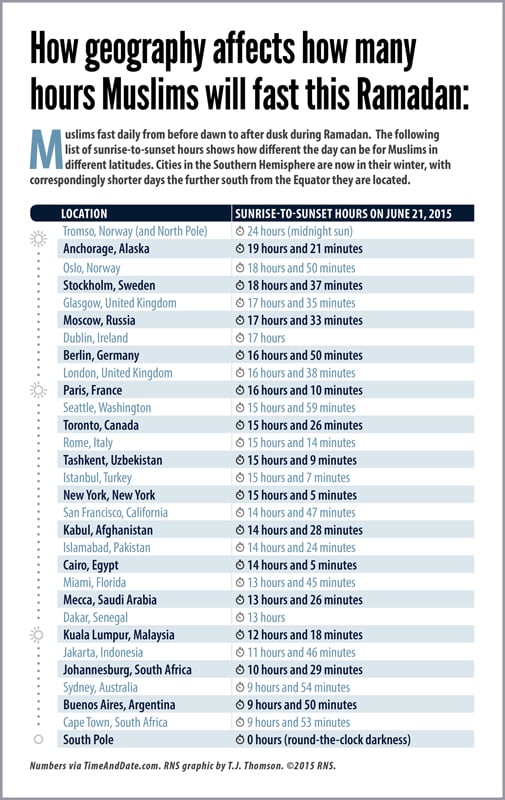 “How geography affects how many hours Muslims will fast this Ramadan.” Religion News Service graphic by T.J. Thomson

“We cannot change the principles of Islam just to suit our needs,” one reader wrote.

“I’m glad this has started a discussion,” Hasan, a senior researcher in Islamic studies at the Quilliam Foundation, told Religion News Service after the BBC interview aired. “There are still relatively few people who adopt this. But this year, there is more awareness and discussion. People have been struggling.”

Because Islam uses the 354-day lunar calendar, the month of Ramadan starts about 10 days earlier than the year before in the 365-day solar year.

Hasan said he began researching the issue last year after a Glasgow Muslim in his 60s asked for help because he felt he couldn’t go through the summer fasts anymore. At its longest, a summer fasting day can last over 18 hours in the Scottish city, where the days in late June are an hour longer than those in London.

“I wondered if there were any fatwas out there and I did some research,” Hasan said. “I suspected that Mohammad Abduh, the famous Egyptian reformer, might have talked about it. He did, and that was a good 100 years ago.”

Hasan, an astronomer with a doctorate in physics, describes his interpretation of Islam as “traditionalist-rationalist” and says: “I’m trying to express Islam as it is lived in today’s context.”

Another change he advocates is determining the start of an Islamic month, and therefore the beginning of Ramadan, by scientific calculations. 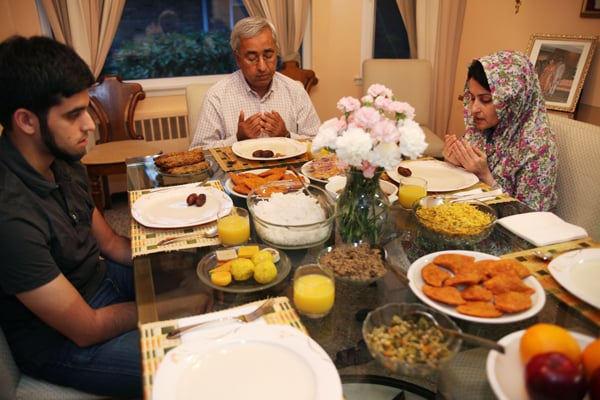 Imran, 22, and his parents, Habeeb and Seemi Ahmed, pray in their Long Island, N.Y., home just before breaking their fast after the first day of Ramadan on Aug. 11, 2010. RNS photo by Sally Morrow

Ramadan traditionally starts the morning after the naked-eye sighting of the new moon, which sufficed in earlier centuries but is breaking down because of modern communications. If Muslims in Britain or France can’t see the new moon because of clouds, they can simply telephone or tweet relatives in Pakistan, Bangladesh or North Africa to see if Ramadan has started there and follow suit if it has.

To critics who say nothing must change, Hasan recalls that Saudi Arabia’s top Islamic authorities had to advise the first Muslim astronaut in 1985 how to pray while orbiting the Earth once every 92 minutes in the International Space Station.

Hasan said the fasting issue has also become more urgent in Britain because the longer days this year fall while state schools are still in session. Four primary schools in London recently announced that Muslim students could not fast without explicit permission from the headmaster.

“We have had a number of children who became ill and children who have fainted or been unable to fully access the school curriculum in their attempts to fast,” the head of Barclay Primary School in east London wrote to parents this month. A Muslim community spokesman said the move was a ”stupidly foolish” overreaction, since children that young are not expected to fast anyway.

Of course, the long days of Northern European summers have a flip side: The short days the region sees in December, when Muslims there end up fasting fewer hours per day than their co-religionists in the Middle East.

Hasan thought of that in the preface to his fatwa, suggesting Muslims who shorten fasting times in summer could lengthen them in winter.

“It’s logical that we should fast longer in winter,” he noted, “but nobody talks about that.”