Pope Francis is immensely popular with U.S. Catholics, but a June 2015 Pew Research survey finds deep political divides over his stance on the human cause of global warming and the urgency of addressing the issue. Creative Commons image by Catholic Church England and Wales

(RNS) A new survey finds U.S. Catholics — like most Americans — are divided along political lines when it comes to the cause and urgency of climate change. And Pope Francis, in a leaked copy of a hotly anticipated encyclical, goes straight at it.

News agencies scrambled Tuesday (June 16) to translate a leaked and unofficial draft of the papal teaching document set for release Thursday. Think Progress posted selections highlighting the draft’s political tone, finding passages where it “flatly rejects traditional conservative Christian justifications for exploiting the planet … and it directly addressed the old biblical claim that because God gave humanity ‘dominion‘ over the earth in Genesis, humanity has a right to exploit it at will.”

“We are not God,” the document reads. “The earth precedes us and was given to us,” Think Progress quotes from an Italian translation.

The Pew Research survey doesn’t ask directly about the biblical concept of man’s dominion over the Earth. But it does sort through the political subdivisions of opinion on the environment and finds that “partisanship and party identification are by far the biggest drivers here,” said Alan Cooperman, director of religion research for the Pew Research Center, which conducted the survey.

The survey also delineates Francis’ great popularity in the United States, but there’s no way to forecast from the data whether the pontiff’s personal force  will translate into action on an issue the pontiff says is “for everyone.”

Pew Research’s survey of 5,122 adults, including 1,016 self-identified Catholics, finds that most overall (68 percent) say they “believe the Earth is warming” and a majority of Catholics of all parties agree (71 percent).

But there’s a 34-percentage-point gap between Catholic Democrats (85 percent agree) and Republicans (51 percent agree), with independents landing in between at 72 percent.

Among Americans overall, the report says: “Belief that global warming is occurring is nearly twice as common among Democrats as Republicans (86 percent vs. 45 percent). The view that global warming is caused by human activity is roughly three times as common among Democrats as among members of the GOP (64 percent vs. 22 percent), as is the view that it represents a very serious problem (67 percent vs. 21 percent).” 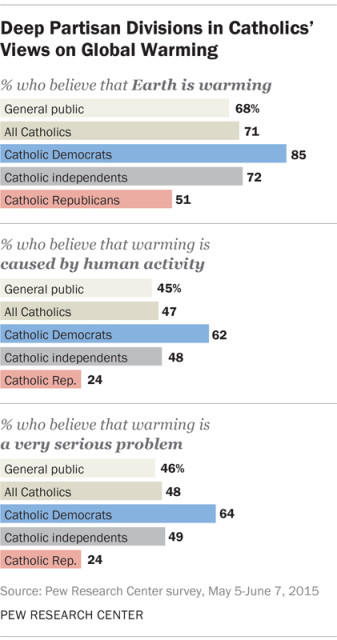 “The poll doesn’t tell us if there’s a way the pope can cut through the politics,” Cooperman said. “Yet, it may be, as people hear about the encyclical, this could move, this could change.”

Global warming “is not a settled issue in the public mind,” said Cooperman.

What causes global warming and how urgently it must be addressed are far more contentious issues.

Only 45 percent of the general public points the blame at human activity, and 46 percent say it is “a very serious problem.” Both views have been fairly consistent since 2006.

Among Catholics, the Pew findings for those two questions would be lower if not for Catholic Democrats. More than 6 in 10 of these Catholics (62 percent) point the blame at “human activity,” and 64 percent call it “a very serious problem.” But scant numbers of Catholic Republicans (24 percent) agree on either point.

Advance reports of the pope’s document all point to a text that will wrap concern for the Earth into God’s call to care for the poor — a central message of Francis’ pontificate. The Washington Post, which translated the unofficial draft, highlighted a cry:  “The poor and the Earth are shouting.”

University of Notre Dame theology professor Candida Moss said the pope clearly sees “care for the environment and care for the poor as two sides of the same coin.”

The Pew survey, conducted May 5-June 7, shows his call for “a poor church for the poor” is a hallmark of how Catholics see him.

Cooperman said Pew wanted to “get beyond ‘good pope/bad pope’ to find the nuances: What do people think he’s doing well or not so well.”

Francis got top marks from Catholics who say he’s doing a good or excellent job for:

And while still favorable, Francis’ marks are lower on addressing women’s concerns (65 percent) and reforming the Vatican bureaucracy (63 percent).

He scored just 55 percent favorable, excellent or good marks on addressing the sex abuse scandal. But the Pew survey was conducted before the Vatican announced a new tribunal to address accountability for bishops in the sexual abuse crisis. And on Monday (June 15), the Vatican announced the resignation of Archbishop John Nienstedt of Minneapolis-St. Paul for failing to protect children from abusive priests and said it would try a former archbishop accused of paying for sex with children.

Survey timing could also account for why Francis got his lowest job performance rating, 53 percent favorable, on addressing environmental issues.

Overall, this pope has made a warm impression on people — and that may open minds and doors to the environmental message.

More than 9 in 10 Catholics call him compassionate, humble and open-minded.

Catholics give him an 86 percent favorable score, as do majorities of other religious groups, Pew found. This will likely soar after his first U.S. visit in September. 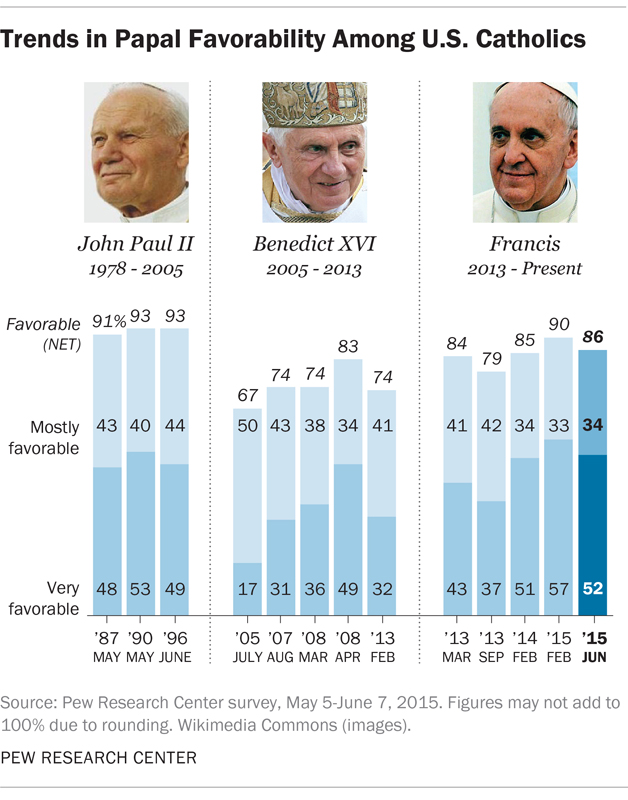 As much as U.S. Catholics love their pope, they have had no qualms about ignoring his teachings. This time could be different.

“Laudato Si’, on the Care of Our Common Home” — the title of the encyclical — is not like papal statements on issues such as sexuality, marriage and the death penalty. Those are matters where U.S. Catholics often break with their church.

This time, the pope and his flock are more in sync, said political scientist John Green, who has seen the Pew findings. He speculated that pushing environmental stewardship as a moral cause to aid the poor could drive people to action.

Still, said Green: “Even through he is immensely popular, it will be a real problem to change American attitudes on climate change. It is one of the issues that defines the partisan divide across the country.”

Pope Francis will also stop in Washington during his U.S. visit and take his case to Capitol Hill.

“His audience here will be the polarized Congress where Catholic Republicans outnumber Catholic Democrats,” said sociologist William D’Antonio, author of “Religion, Politics and Polarization: How Religiopolitical Conflict Is Changing Congress and American Democracy.”

Whether Francis’ open-arms personality and his strong insistence on facing up to global warming and ending degradation of the Earth’s resources as a matter of social justice will fly in the partisan United States — where he will also address a joint session of Congress — is a question beyond what the poll data can tell.