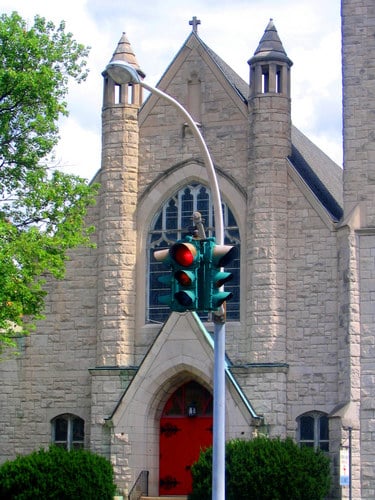 Overall, church/organized religion is now ranked in fourth place in the Gallup survey -- behind the military, small business and the police.

(RNS) Americans have less confidence in organized religion today than ever measured before -- a sign that the church could be “losing its footing as a pillar of moral leadership in the nation's culture,” a new Gallup survey finds.

"In the '80s the church and organized religion were the No. 1" in Gallup's annual look at confidence in institutions, said Lydia Saad, author of the report released Wednesday (June 17).

Confidence, she said, "is a value judgment on how the institution is perceived, a mark of the amount of respect it is due." A slight upsurge for Catholic confidence, for example, parallels the 2013 election and immense popularity of Pope Francis.

Overall, church/organized religion is now ranked in fourth place in the Gallup survey -- behind the military, small business and the police -- while still ahead of the medical system, Congress and the media, among 15 institutions measured.

"Almost all organizations are down but the picture for religion is particularly bleak," said Saad.

In the mid-'70s, nearly 7 in 10 Americans said they had “a great deal or quite a lot” of confidence in the church or organized religion. That has bobbled downward decade by decade to a new low of just 42 percent, according to the report. "Percentage of Americans With a 'Great Deal'/'Quite a Lot' of Confidence in the Church/Organized Religion," graphic courtesy of Gallup

However, the most significant influence on the religion statistic is the high number of Americans disconnected from organized religion and likely to have little or no confidence in it, Saad said.

A Pew Research survey this year finds nearly 23 percent of Americans say they don't identify with any religion. The Gallup data -- which combined this group with non-Christians -- finds only 10 percent of these had a great deal or quite a lot of confidence in religion.

Scandals have an impact and so do the personalities in the news. During scandals involving prominent televangelists in the late '80s, Protestant confidence in organized religion slid from a high of 73 percent in 1985 to 51 percent in 1989. Confidence moved briefly back upward before the downturn in recent years.

Similarly, Catholic confidence reached nearly its lowest ebb (41 percent) during the peak of the Catholic sex abuse scandal in 2002. Catholic views may have recovered 10 percentage points in part because of the “Francis factor.”

The report cites the tremendous popularity of Pope Francis as a reason Catholic confidence has stabilized at above 50 percent for the first time in more than a decade. The survey research was underway when the Vatican announced a new tribunal to hold bishops accountable in confronting clergy sexual abuse.

The survey of 1,527 U.S. adults was conducted by landline and cellphones June 2-7, 2015. The margin of error is plus or minus 3 percentage points overall.