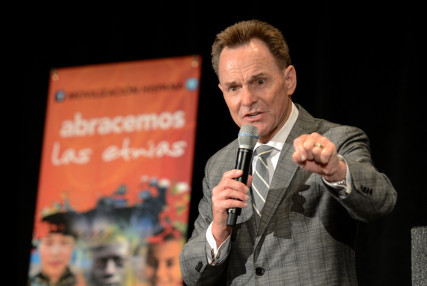 No one will ever accuse Southern Baptist leaders of subtlety.

The Supreme Court is expected to rule on a handful of gay marriage cases with national implications this month, so denominational leaders wanted to make clear where they stood. At their annual gathering this week, repeated calls to oppose gay marriage echoed through the Greater Columbus Convention Center.

SBC president Ronnie Floyd preached a fiery sermon declaring, “the Supreme Court of the United States is not the final authority, nor is the culture itself, but the Bible is God’s final authority about marriage and on this book we stand.” At a press conference on Wednesday, leaders released a letter signed by 16 past denominational presidents–including my father, James Merritt, who presided from 2000 to 2002–stating, “we will not accept, nor adhere to, any legal redefinition of marriage issued by any political or judicial body including the United States Supreme Court.” And the denomination’s political arm released a legal guide for churches, schools, and ministries to protect themselves as culture grows more comfortable with same-sex marriage.

But the most significant event by far was the passing of an official resolution reaffirming their support for traditional marriage and calling on the Supreme Court to “uphold the right of the people to define marriage as exclusively the union of a man and a woman.” Conspicuously absent from the resolution was any statement of love or compassion for LGBT persons, though it did call for Southern Baptists to “love our neighbors and extend respect in Christ’s name to all people.”

The Southern Baptist Convention is America’s largest Protestant denomination, and therefore, such efforts are notable. Here are three things you need to know about their anti-gay marriage resolution:

If I had a dollar for every time Southern Baptists passed a resolution addressing marriage, I’d be a rich man. Well, not actually, but I would have $41. That’s the number they’ve passed in their history, 17 of them since 2001. While it may be rude to repeat yourself in real life, it is expected in Southern Baptist life. This isn’t the first resolution about marriage the body has passed, and I’ll bet you $41 dollars that it won’t be the last.

The SBC is a voluntary gathering of autonomous churches. As a result, no one can claim speak for all Southern Baptists–not even the president of the denomination. That’s why it’s a little odd when people ask questions like Fox News’ Todd Starnes did: “So what would it look like if 16 million Southern Baptists engaged in civil disobedience?” There is literally nothing–not even opposing gay marriage–that would unify the behaviors of every single Southern Baptist pastor and church attender. They’ve been called “the Battling Baptists” for a reason.

SBC resolutions are “non-binding,” which means they generally express the opinion of those who attended the particular gathering where they were passed. Most people who attend Southern Baptist churches are blissfully unaware of which resolutions are passed and what they assert. While the majority of Southern Baptist church members presumably oppose gay marriage, its difficult to say how many would agree with every line of this resolution or whether it will actually affect the way churches and pastors think or behave.

3) It’s Not Their Final Move

Southern Baptist leaders are committed to engaging the gay marriage debate, and they show no signs of backing down. Even if the Supreme Court legalizes gay marriage, don’t expect them to slip quietly into the night. There are still religious liberties battles to be fought in both the marketplace and non-profit sphere. And conservative Christians will also need to make the case for why they are merely principled and not, in the words of Southern Baptist Theological Seminary president Albert Mohler, “morally deficient.” The goal posts may be moving, but the game is not over.

Expect Russell Moore, president of Southern Baptists’ political agency, to lead the charge going forward. Moore is likable, eloquent, and balanced. While he cannot command the attention or devotion of all Southern Baptists, he can influence enough of them to make a difference. He will make a formidable foe for those seeking to expand LGBT rights.

While Southern Baptists are not subtle, they are significant. And when it comes to sexuality debates, they will continue to be so.