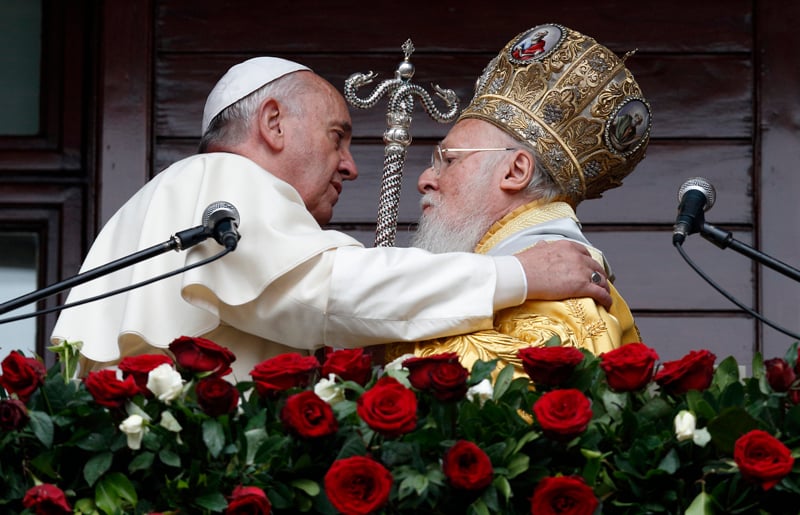 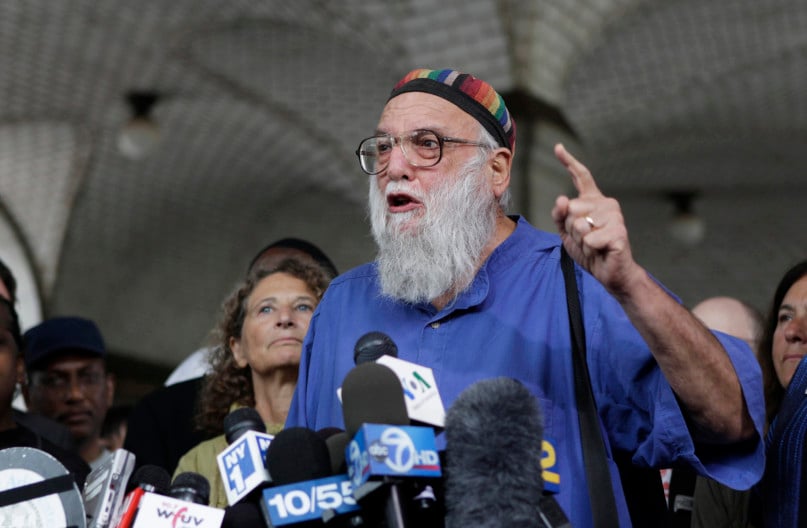 Rabbi Arthur Waskow, Director of the Shalom Center, speaks in support of a proposed Muslim cultural center and mosque Park51 in New York on August 25, 2010. Photo couresy of REUTERS/Lucas Jackson
*Editors: This photo may only be republished with RNS-PAPAL-FANS, origianlly transmitted on June 18, 2015.

(RNS) Rabbi Arthur Waskow, author of a rabbinical letter on climate change, said he can sum up his response to Pope Francis' groundbreaking encyclical on the environment in one word:

"When the spiritual leader of a billion people says climate change is a moral question, a religious question, then all of us who have been saying that for years are strengthened. I certainly feel strengthened, even though I come at it from a quite different religious perspective."

Not necessarily what you'd expect of a rabbi responding to the highest form of teaching the Catholic Church has -- but emblematic of what many non-Catholics were saying after the encyclical, "Laudato Si'," was delivered Thursday (June 18).

" ... A beautiful, deeply considered document taking us back to why everything exists and our human place within it, rather than our place outside it." That was the verdict of the Alliance of Religions and Conservation, a British organization that works with the Church of England on environmental issues.

And Ecumenical Patriarch Bartholomew, leader of 300 million Orthodox Christians, threw his big, gold hat into the pope's corner, saying: "All of us ultimately share the Earth beneath our feet and breathe the same air of our planet’s atmosphere. Even if we do not enjoy the world’s resources fairly or justly, nevertheless all of us are responsible for its protection and preservation."

True, there were some naysayers. One Twitter critic described the encyclical as "actually kind of nutty," while another labeled it "Marxist." But overall response shows that many people -- from non-Catholics to the nonreligious -- think the pope is right on target.

Several members of the Heartland Institute, a think tank that does not link global warming to human activity, issued scathing remarks. “Despite Pope Francis’s best intentions, the policies he recommends to mitigate global warming would make it far more difficult to overcome poverty," said E. Calvin Beisner, founder of the Cornwall Alliance for the Stewardship of Creation, a Christian organization and Heartland Institute member.

But there was plenty of applause from the scientific community. Michael E. Mann, a professor of meteorology at Penn State University, told National Catholic Reporter that scientists generally think Francis  "got the science right."

Mann added that the encyclical may even be "overly conservative."

"Human activity is most likely responsible not just for 'most of global warming,'" he told NCR, "but all of it."

Ron Lindsay, president of the Center for Inquiry, a humanist advocacy group, said in The Huffington Post, "One cheer for the pope!" But if Francis really wants to address climate change, Lindsay went on, he should start with the church's policies on birth control -- lower the global population and you will lower its consumption of fossil fuels. "Removing the Catholic Church's opposition to contraception will help the environment much more than telling everyone to ride bicycles," he said.

And as for those who say religious leaders shouldn't dabble in politics -- looking at you, Jeb Bush -- two Episcopal Church bigwigs said there is a bigger issue.

"Perhaps a question more pertinent than 'Should religious leaders speak out about climate change?' is, 'Should our politics harden our hearts to important messages from the leaders of our faith?'" wrote the Very Rev. Gary Hall and the Rev. Sally G. Bingham, two members of Interfaith Power & Light, a network of environmentally conscious congregations.

"Interfaith Power & Light includes leaders from every major world religion who all recognize that the Pope’s encyclical is really a call to love God and one another."