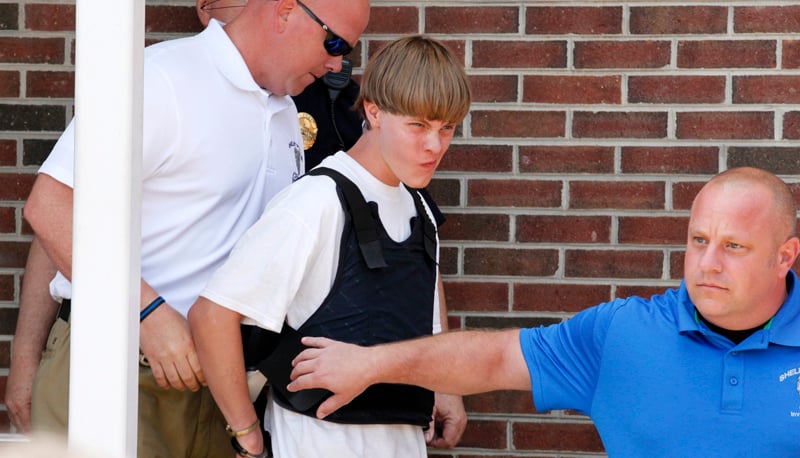 Police lead suspected shooter Dylann Roof, 21, into the courthouse in Shelby, North Carolina, on June 18, 2015. Roof, a 21-year-old with a criminal record, is accused of killing nine people at a Bible-study meeting in a historic African-American church in Charleston, South Carolina, in an attack U.S. officials are investigating as a hate crime. REUTERS/Jason Miczek *Editors: This photo may only be republished with RNS-WAX-COMMENTARY, originally transmitted on June 19, 2015.
June 22, 2015
Jonathan Merritt

Police lead suspected shooter Dylann Roof, 21, into the courthouse in Shelby, North Carolina, on June 18, 2015. Roof, a 21-year-old with a criminal record, is accused of killing nine people at a Bible-study meeting in a historic African-American church in Charleston, South Carolina, in an attack U.S. officials are investigating as a hate crime. REUTERS/Jason Miczek
*Editors: This photo may only be republished with RNS-WAX-COMMENTARY, originally transmitted on June 19, 2015.

(RNS) Nadine Collier, daughter of one of Dylann Roof’s nine alleged victims, has one message for the suspected killer: “I forgive you.” The 21-year-old Roof is charged with the violent slaying that occurred at the Emmanuel AME Church in Charleston, S.C.

At Roof’s bond hearing, Chief Magistrate James Gosnell allowed Collier to deliver a statement to the suspect who joined via videoconference: “I just want everybody to know, to you, I forgive you. You took something very precious away from me. I will never talk to her ever again, I will never be able to hold her again. You hurt me. You hurt a lot of people. But God forgives you, and I forgive you.” Roof watches and offers only a chilling blank stare.

What does it take to forgive someone like Dylann Roof? How does one muster the courage, the conviction, the moral fiber to grant such a gift to someone who has already taken so much? To serve a feast of forgiveness to a person who hasn’t even ordered a single serving?

The story of Collier’s astounding forgiveness reminds me of another ancient one. Baking in the sun, an innocent Nazarene named Jesus hangs from a Roman cross. He’s losing blood at a rapid rate. His weeping mother is crumpled at his feet, adding emotional agony to his unbearable physical torment. Jesus opens his mouth to speak, but what will he say? Will he curse his executioners or cry out against those complicit in the broken trial that landed him there in the first place?

“Father, forgive them, for they know not what they are doing,” Jesus says.

This single statement spawns a list of questions. For one, who is Jesus referring to? The Roman soldiers who were gambling for his tunic, trying to block out the horror of what was unfolding over their heads? Pilate, who gave the execution order even though he seemed to know better? The religious authorities that did what religious authorities do best -- crush any dissenter who threatens the status quo? These all seem possible, but Jesus could have also been referring to his closest friends who tucked tail and deserted him the moment the trouble started. I like to think he was asking God to forgive them too.

Another question: What does Jesus mean when he says that “they know not” what they are doing? It seems that most of the possible recipients of this forgiveness have at least an inkling that something was off about this whole ordeal. The Romans had to know that innocents often died at their hands or at least that guilty people often received a punishment that far exceeded their crimes. The religious leaders certainly knew better. And what of Jesus’ friends? He had offered them so many warnings that this moment would come that they were beginning to grow annoyed with the redundancy.

And why does Jesus ask his father to forgive them? Why doesn’t he just say, “I forgive”? Is he resigning himself passive participation in the process, or is he expressing that their sins were ultimately against God? As with the other questions, it is difficult to say based on the limited information we have about the event.

Even if we could resolve such questions, we’d still be left with a giant, “So what?” How does this story apply to us today, if at all? I’m not Son of God, and neither are you. If you’re like me, you find it far easier to cry, “My God, My God, why have you forsaken me?” than “Father, forgive them.” I can own my sense of rejection. I can pray it without crossing my fingers or toes. But forgiving is another matter. Owning victimhood is easier than offering forgiveness. And there is no foolproof 12-step program to move one from “why have you forsaken” to “forgive them” after a tragedy like Charleston.

I can speculate about the answers to these questions. I like to think that Jesus was bundling all the guilty parties together and offering a “Father, forgive” on all their behalf. I like to think that when Jesus says “they know not,” he is ignoring the evidence and giving them the benefit of the doubt instead. That Jesus is saying even if they know exactly what they are doing, he’ll grant them forgiveness as if they don’t. I like to think that Jesus asked God to forgive them because in that moment, it wasn’t something he could say himself. Maybe Jesus is saying that when we can’t seem to muster the strength to forgive on our own, we can let God forgive people through us.

These are my ruminations, but the gospel writers don’t seem all that concerned with answering these questions. And maybe that’s the point. Perhaps the story teaches that forgiveness is possible in the midst of pressing questions and in the absence of answers. Maybe the point is that forgiveness transcends logic and reason, that it doesn’t always make sense.

Forgiving someone who has done something unforgivable is difficult, and I’m not sure exactly how it works. But I know it is possible. Because Jesus has done it: “Father, forgive them.” And because Nadine Collier has too: “You hurt me… but I forgive you.”