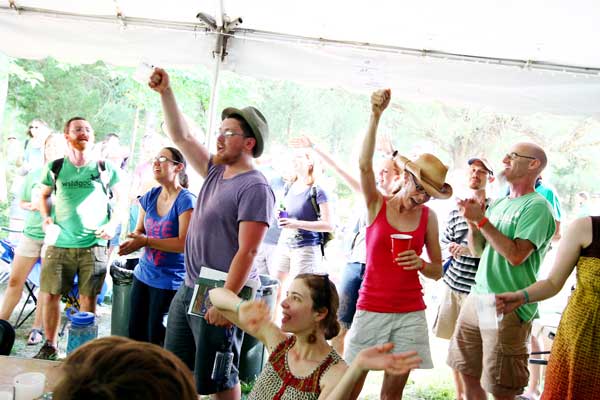 An afternoon of Beer ‘N’ Hymns rocks the Beer Tent at a Christian music festival. Such events are growing in popularity, according to a report from Eventbrite. Religion News Service photo by Courtney Perry

(RNS) The Christian conference circuit has special appeal to women.

Jews and Muslims alike have dinners and parties organized around their holiday calendar.

And Buddhists and New Agers get heady: More than half of these groups’ sponsored events are classes and seminars, and meditation retreats.

Those are just a few of the revelations culled from a study conducted by Eventbrite, a company that markets 1.7 million live events annually, including tens of thousands of those sponsored by religious groups from small workshops to massive music festivals.

Just as fascinating is the data indicating that inviting someone to a special event may be more effective than an invitation to a worship services, both in evangelizing and in strengthening the commitment of those already in the fold.

The company got curious after it spotted a 50 percent jump in special events held by religious groups between 2013 and 2014, said spokeswoman Amanda Livingood.

Eventbrite did a dive through clients’ data and surveyed 1,000 people to ask about the impact of such events on their faith — and on their wallets.

The results were uplifting all around, according to the survey report and analysis by Hartford Seminary sociologist Scott Thumma, which was released Wednesday (June 24). Yet the findings varied not only by faith group but by geography as well.

For example: San Francisco hosts the most religious classes of any city — 38 percent of religious events. New York has the greatest number of religious concerts and parties. Nearly one in five (18 percent) of the events in Washington, D.C., were dinners.

“There’s a real appetite for these kinds of events and for diversity in events, although you can’t really go wrong with food and music,” said Livingood.

Music is a draw for 42 percent of people, and 41 percent said they’d be more likely to come to events with food and drink.

But the most popular events for the majority of people were those offering special speakers or guests (53 percent) and those with charitable or volunteer opportunities (44 percent).

More valuable to the faith-based clientele, however, is what the data shows about the impact of such events:

Among the top findings:

There’s also a twist to the popularity of religious events: People with no religious ties like them, too.

According to the report, more than 50 percent of these “nones” said they occasionally or often attend religious events, and 25 percent said they had a “serious interest” in attending.

“Not surprisingly, they were more likely to be spectators,” the report notes.

Opinion
Why ‘namaste’ has become the perfect pandemic greeting
News
In Oregon, churches and anti-fascists unite to provide mutual aid to fire evacuees and others in need
News
Muslim woman sues Los Angeles Police Department for forcibly removing her hijab
News
Activists to hold protest rally after reports of ICE officials forcing Muslim detainees to eat pork
Islam
Rep. Rashida Tlaib joins Congressional Freethought Caucus
© Copyright 2020, Religion News Service. All rights reserved. Use of and/or registration on any portion of this site constitutes acceptance of our User Agreement and Privacy Policy, Privacy Statement and Cookie Notice. The material on this site may not be reproduced, distributed, transmitted, cached or otherwise used, except with the prior written permission of Religion News Service.