VATICAN CITY (RNS) Pope Francis is expected to draw a crowd of up to 2 million people to Philadelphia at the end of September’s World Meeting of Families, event organizers said Thursday (June 25) during a visit to Rome.

Topics up for discussion at the congress include immigration, family finances and Internet use within the home.

But visitors should not expect the church to change its views on gay families, Philadelphia Archbishop Charles Chaput told journalists at the Vatican on Thursday.

“People who have experienced same-sex attraction” will be welcome in Philadelphia, he said, but he was clear in stating that the congress would not be open to supporting gay families.

“We don’t want to provide a platform at the meeting for people to lobby for positions contrary to the life of the church,” he said.

The pontiff will arrive in Philadelphia on Sept. 26 after the four-day congress, which is due to draw Catholics from around the world to discuss family issues. The following day he will say Mass outside the Philadelphia Museum of Art.

The ceremony is expected to attract a crowd of up to 2 million, said Bishop John J. McIntyre, auxiliary bishop of Philadelphia.

Preparations are well underway for the visit — Pope Francis’  first to the U.S. since being elected pontiff in 2013. More than 6,100 volunteers already have registered to lend a hand. 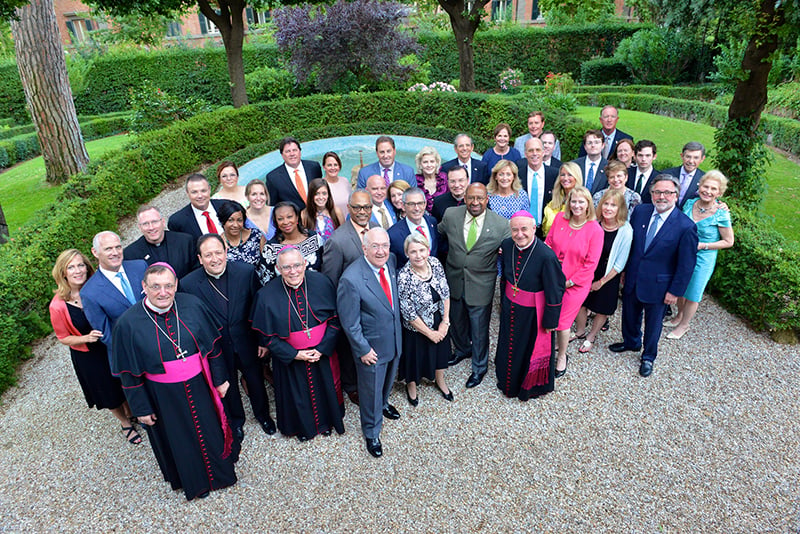 The World Meeting of the Families delegation poses for a photograph during a reception at home of US Ambassador to the Holy See in Rome on June 22, 2015. Photo courtesy of World Meeting of Families – Philadelphia 2015/Chris Warde-Jones

More than 11,800 people have signed up so far for the World Meeting of Families, with most delegates coming from across the U.S. Significant numbers will also travel from Canada, Vietnam, the Dominican Republic and Nigeria; more than 100 countries will be represented.

The scale of the event entails a $45 million budget, more than $30 million of which has already been raised, said Chaput.

“Much of that is for crowd safety and for infrastructure,” Chaput said. “The congress itself probably costs $2 million to $3 million.”