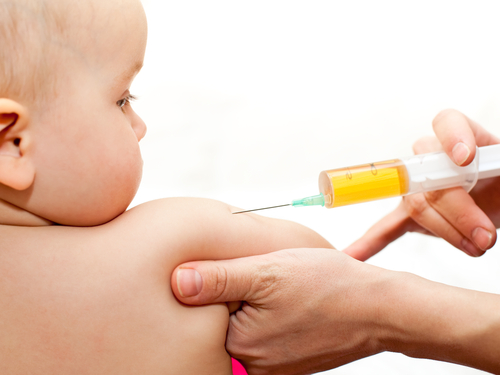 A baby being vaccinated.

The governor of California — which was ground zero for the Disneyland measles outbreak that infected 117 people — today signed legislation giving the state one of the toughest school vaccine laws in the country.

“The science is clear that vaccines dramatically protect children against a number of infectious and dangerous diseases,” said Gov. Jerry Brown, a Democrat, in a statement. “While it’s true that no medical intervention is without risk, the evidence shows that immunization powerfully benefits and protects the community.”

While all 50 states require school children to be vaccinated, 48 currently allow exemptions for families with religious objections and 20 exempt children based on parents’ personal beliefs, according to the National Conference of State Legislatures.

Sen. Richard Pan, a pediatrician and cosponsor of the legislation, said he hopes other states will follow California’s example.

“As the largest state in the country, we are sending a strong signal to the rest of the country that this can be done, that science and facts will prevail to make sound laws,” Pan said.

A growing number of parents have opted to delay or skip vaccines because of concerns over safety. Multiple studies have found vaccines to be safe, with no link to autism or other chronic conditions. Myths about vaccines continue to circulate online, however, and are promoted by a number of celebrities.

Brown noted that California children can still receive an exemption to the vaccine requirement if a physician concludes there are “circumstances, including but not limited to, family medical history, for which the physician does not recommend immunization.”

Critics of vaccination had campaigned vigorously against the law, arguing that it infringed on their freedom of choice. Some have vowed to challenge the law in court. The Supreme Court has upheld state vaccine laws twice.

Pediatrician Robert Sears, known for publishing an alternative vaccine schedule that delays a number of shots, predicts that many anti-vaccine parents will take their children out of school.

“When the government tries to force something on families, especially children, parents don’t line their kids up to comply. They run the other way,” said Sears of Capistrano Beach, Calif., who campaigned against the law. “Forcing parents to choose between vaccines and school is unnecessary and unfair. I predict that more families will shift into homeschooling and co-op, home-based educational programs over this, rather than feel coerced into doing something they don’t feel is right for their child. Even more families will lose trust in the government and the medical system.”