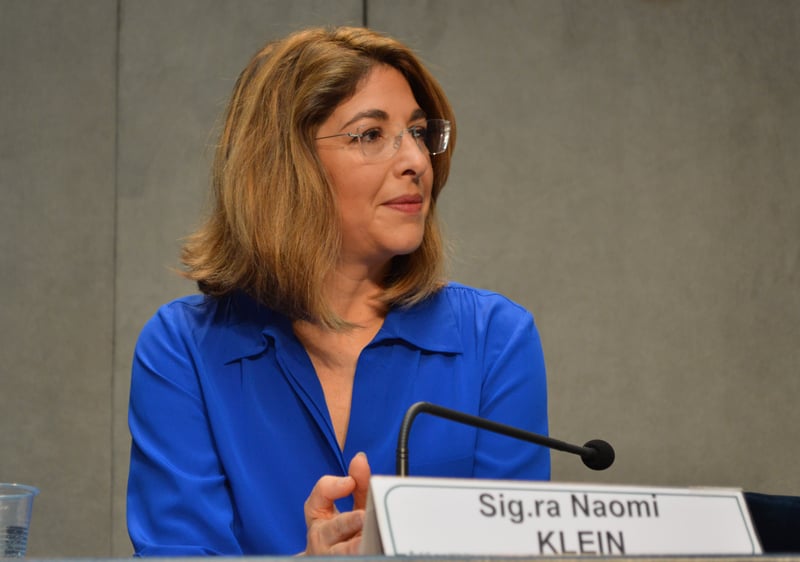 Anti-capitalism activist Naomi Klein praised Pope Francis for standing up to Republicans who are warring against environmentalists on July 1, 2015, at the Vatican. Religion News Service photo by Rosie Scammell

VATICAN CITY (RNS) Anti-capitalism activist Naomi Klein on Wednesday (July 1) praised Pope Francis for standing up to Republicans who are warring against environmentalists, as the Vatican continues its battle against climate change with a high-level conference at the Holy See.

“I do believe that given the attacks that are coming from the Republican Party and fossil fuel interests in the U.S. it was a particularly courageous decision to invite me here,” Klein, who lives in Canada,   told journalists at the Vatican. “It indicates that the Holy See is not being intimidated and knows that when you say powerful truths, you make some powerful enemies.”

A high-profile campaigner who identifies herself as “a secular Jewish feminist,” Klein arrived at the Vatican on Wednesday ahead of a two-day climate change conference. The “People and Planet First” meeting brings together top Vatican officials and laypeople, including scientists and civil society activists, to discuss the pope’s environmental encyclical released in June.

Klein’s comments on Republicans follow the release last month of a Pew Research survey that found that of 51 percent of Republican Catholics who believe the Earth is warming, only 24 percent believe it is caused by human activity. Comparatively, 85 percent of Catholic Democrats believe in global warming and 62 percent of those said it’s a man-made problem.

But climate change denial could change with the pope’s September visit to the U.S., during which he will address Congress, Klein said: “This could mean real trouble for American politicians who are counting on using the Bible as cover for their opposition to climate action.”

While she has joined forces with the Vatican to push the message of the pontiff’s encyclical, which criticizes the global financial system and self-serving Western politicians, some Catholics have raised concerns over the involvement of laypeople who do not share the church’s beliefs.

Klein said it may seem like a “surprising alliance” but that her involvement would have no effect on the Catholic Church’s broader teachings. “This is an alliance of a specific issue, it’s not a merger, and nobody’s being asked to agree on anything. Nor do we agree on everything related to climate change, but when you are faced with a crisis of this magnitude, people have to get out of their comfort zones.”

She was speaking alongside Ottmar Edenhofer, a German economist and co-chair of the Intergovernmental Panel on Climate Change, who described the current environmental situation as “one of the biggest global crises of our time.”

He criticized those who deny the seriousness of climate change for their own gain, and he threw his support behind the pontiff’s message.

The encyclical “asks for a fundamental departure from the business-as-usual scenario,” Edenhofer said.

“From this perspective, the encyclical is quite clear that the denial of climate change is no longer a quest of scientific truth but it is an effort to protect private interests against those of the common good,” he said.

Such frustration with the world’s capitalist kingpins was repeated by Flaminia Giovanelli, undersecretary of the Vatican’s Pontifical Council for Justice and Peace.

Speaking on behalf of the council’s president, Cardinal Peter Turkson, she outlined an appeal to political leaders globally: “The political dimension needs to re-establish democratic control over the economy and finance, that is, over the basic choices made by human societies.”