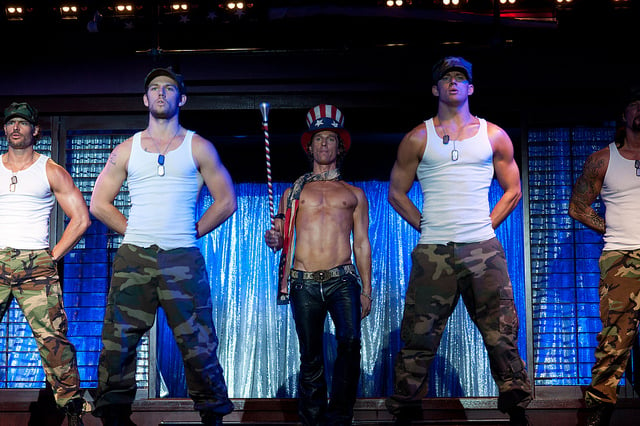 A still from the original "Magic Mike" | Image by discutivo via Flickr (http://bit.ly/1fhK7kN)
July 6, 2015
Laura Turner

A still from the original "Magic Mike" | Image by discutivo via Flickr (http://bit.ly/1fhK7kN)

The original Magic Mike opened three years ago to box-office success and a permanent star in the pop culture firmament. Channing Tatum had arrived and, flanked by a team of well-defined men with serious moves, the women of America were abuzz. I was there on opening night, with my two closest female relatives, cackling and shrieking and watching some of it through half-closed eyes.

It wasn't until after seeing the movie that I found out I wasn't supposed to have seen it, and I definitely wasn't supposed to have enjoyed it. Christian bloggers across the country were up in arms--and not the muscular kind--about Christian women enjoying Magic Mike. Comparisons to 50 Shades of Grey were plentiful, as were questions about whether Christian women would be okay with their husbands raving about seeing a female version of the movie. One blog post asked whether the movie should really be called Tragic Mike for all the ways it causes women to stumble into sin. Others compared it to watching porn and lamented the way their Christian girlfriends were going deeper down the rabbit hole of lust. One blogger said that "it honestly is doing damage to women’s sex drives" and implored her readers not to see it.

The only thing all of these women had in common, as far as I could tell, was that none of them had actually seen Magic Mike. Which is fair! You don't have to see any movie you don't want to see; this is America, remember those fireworks you saw this weekend? Those were celebration of our right to choose whatever movie we want to watch. For instance, I have never seen Space Balls. But I would never tell you not to watch Space Balls! Magic Mike was actually not about strippers at all! It was about a priest who gained magical powers through prayer and went around healing Irish villagers through dance!

No, okay, it was actually about strippers. But it had a significant plot--it was a Soderbergh movie, after all--that involved custom furniture making, critiques of capitalism, commentary on friendships, and questions about loyalty. It was a really good movie, with some really good dancing, which also happened to be sexy. To address the objections above, this is something completely different from what I understand 50 Shades of Grey to be about (I don't know; haven't read it)--there is no abuse, no weird power dynamics, and there is a deep understanding in Magic Mike that making bad decisions results in bad consequences. It was not porn and doesn't have to cause stumbling. And it is not even close to the same thing as men watching a movie about female strippers, because there is not a single female stripper in either movie, and if you don't understand the difference then I suggest you go read a book about sexuality, or about anything, really.

Magic Mike XXL is buckets of fun. I went again, on opening night, with my two closest female relatives, and we shrieked and cackled our way through the whole thing along with about 200 of our closest new friends. There are so few films that cater specifically to women, and appeal to a woman's sense of sexuality in such a fun way--there was as much laughing as there was cat-calling--and that acknowledges that women are sexual people. That doesn't mean you--or anyone--should see it. Freedom! But don't skip it just because someone on the Internet told you it wasn't Christian. Test them all and hold fast to what is good, and all that, and come away with a little smile. Some of the dancing is sexy. Some of it simulates sex--which is actually nothing new in the history of dance--but may not be your thing. Some of it, like a scene with Joe Manganiello in a gas station store, is downright hilarious.

So see it, or don't (no, definitely see it!). Magic Mike XXL is, much like its leading man, a delightful labrador puppy of a movie that wants mostly just to make women happy. That's not the most important thing in life, but it's also not bad. In fact, it's kind of delightful.

September 3, 2020
Related Posts
By Andre Henry
To finish the fight for freedom, we need a revolutionary tea party for racial justice
By Antipas L. Harris
The Fourth of July: Time to celebrate or lament?
By Frederick Douglass
‘What to the Slave Is the Fourth of July?’
By Alejandra Molina
Four young people of different faiths move into a home together, then a pandemic happens
By Jeffrey Salkin
Warning: Your piety might be dangerous to your health