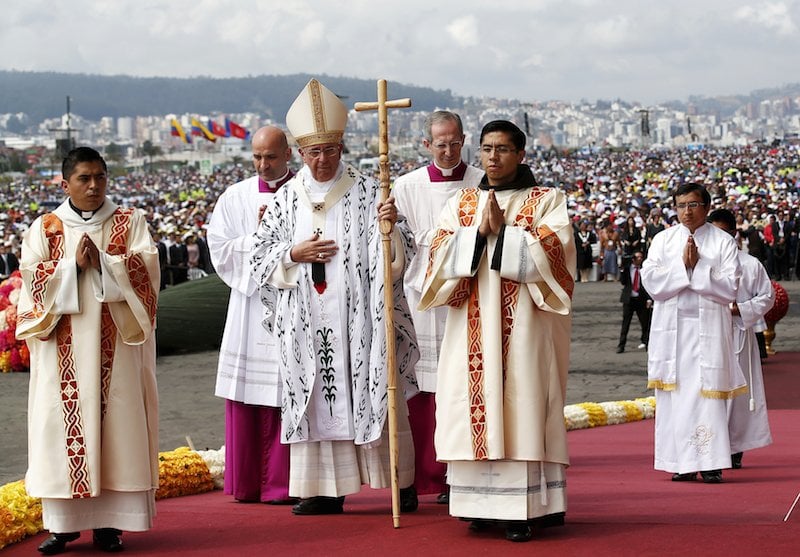 QUITO (Reuters) - Pope Francis called on people across Latin America to turn to their common Christian roots as an inspiration to resolve differences when he said Mass for nearly one million Catholics in the Ecuadorean capital on Tuesday.

In his homily, the Argentine pontiff praised the conviction and strength in the "cry for freedom" during the region's independence struggle from European powers 200 years ago.

"But history tells us that it only made headway once personal differences were set aside," the Pope told the crowd gathered at Quito's Bicentenario Park against the backdrop of the Andean mountains on his third day in Ecuador.

He urged the continent's people to use the Gospel "as a way to unite our hopes, concerns, ideals and even utopian visions."

Tens of thousands of people braved wind and rain to camp out overnight. The weather later changed and the service took place under a hot sun.

Isabel Pavon, 55, came with her two small children, a boy and a girl who held up small wooden crosses.

"It is such a joy to be here," she said, pressed up against a security fence. "He is our pope, the pope of the people."

Pope John Paul II arrived at the same Bicentenario Park when it was an airport 30 years ago.

Francis is visiting three of the smallest and poorest nations during a week-long tour of his native South America.

Political protests had been rocking Ecuador, a socialist-ruled nation of 15 million people, before the pontiff's arrival, but his presence has brought a temporary halt to demonstrations.

The Mass was attended by President Rafael Correa, who had private talks with the pope on Monday night at the presidential palace after Francis returned from the coastal city of Guayaquil, where he said Mass for 800,000 people.

Two bouquets of thousands of roses rested on the tarmac in front of the stage as Francis, wearing a vestment with an indigenous Andean design on it, said the Mass before the huge crowd. Some of the prayers were said in Kichwa, an indigenous language spoken in the Andean region.

Some bedraggled faithful had camped out for two nights in the extremes of Andean weather - torrential rain, biting wind and blazing sun.

For some, it became too much and at least one fight broke out as people attempted to push in.

Yet most thought the wait worthwhile.

"He is somebody who has really changed the Church, changed young people's way of thinking," said Veronica Calderon, a 23-year-old civil engineering student who had arrived at six in the morning the day before the Mass.

"He's not been afraid to be tough with those who are corrupt, those who have damaged the Church," she said in an apparent reference to financial and sexual abuse scandals.

Hawkers walked up and down the lines selling wooden crosses, flags and t-shirts made especially for the trip as well as food and drink. Many used umbrellas to shield themselves both from the downpours and blazing sun.

Not everybody in Ecuador was happy with the pope's visit. Some have accused the Church of curbing progress on women's rights and gay rights in a traditionally macho region.

"It's not good that the Church has so much weight in political decisions," said Andres Caicedo, 35, spokesman for the Ecuadorean Atheist Association. "It's also inappropriate that in a country that is supposedly secular, we spend so much money on such a visit."

Francis, making his first trip abroad since he released his landmark encyclical last month on defending the poor and the planet, was due to address university students and civil groups on Tuesday night.

The pope flies on Wednesday to La Paz, Bolivia, another highland city where oxygen tanks are kept at the airport for arriving passengers who may struggle with the thin air.

That will focus attention on the 78-year-old pope's health as he had part of one lung removed when he was younger after an infection that almost took his life. The last leg of his trip is Paraguay.