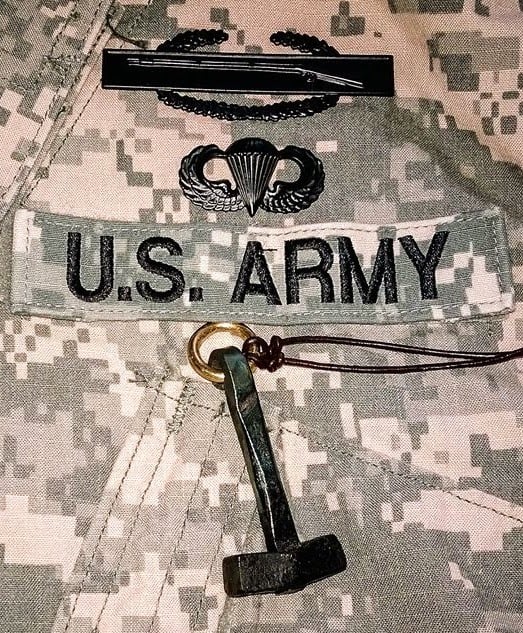 (RNS) Jeremiah McIntyre wants to be called a Heathen.

The 38-year-old Army sergeant follows the old Norse religion Asatru, in which the god Thor swings his hammer in the sky and Odin rules a heavenly place called Valhalla. Should McIntyre die, the U.S. Department of Veterans Affairs would allow a hammer of Thor on his tombstone.

But the Army does not otherwise currently recognize the active-duty soldier's faith. He can't organize or attend Heathen services on base without special permission, he can't receive prayer or counseling from a Heathen chaplain, and if he were to die in the service he would probably end up with a nondenominational Christian burial.

“It's all well and good to be allowed to display my religion on my tombstone, but I'd like to be able to display it while I'm still alive,” he said.

Heathens have been seeking recognition as a religious group from the U.S. armed forces for at least six years. Only the Air Force recognizes Heathens, and that status was granted only last year. In January, an Army official told Heathen representatives they had been approved -- only to backtrack a few days later.

Now, the group is redoubling its efforts for Army recognition with a petition and a letter-writing campaign. Some, like McIntyre, are reaching out to media to tell their stories.

“It’s just wrong,” McIntyre said of the fact that he cannot have a Heathen burial service. “I am sure you would not want some other religion praying over your body and asking that it go somewhere you don’t want to go.”

McIntyre is one of several Heathens -- both military and civilian -- pushing for Army recognition. The current move is spearheaded by Josh Heath. Heath served six years in the Army and is now in graduate school. He and other soldiers -- who declined to be quoted in part because they are on active duty -- are petitioning the Army to recognize Heathen and Asatru (which roughly means "belief in the gods") as religious preferences in about 2009.

“If you have a (recognized) religious preference you can have a religious holiday,” Heath said. “At basic training, it would allow them to have a religious book -- you are allowed only one. And if they had Heathen as a choice, they could have an actual Heathen ritual for their burial."

Soldiers could also request permission to attend Heathen worship services, called "blóts," and more easily find fellow Heathens to organize them. And, getting Heathenry and Asatru recognized would be the first step to getting their own Army chaplains.

Josh Heath served six years in the Army and is now in graduate school. He put together a four-man team and began petitioning the Army to recognize Heathen and Asatru (which roughly means "belief in the gods") as religious preferences in about 2009. Photo courtesy of Josh Heath

“Without that, there is almost literally no way you can get a chaplain for your faith,” Heath said.

The men say they felt frustrated last year when the Army added humanism to its list of recognized religions -- another long-term effort that involved the American Civil Liberties Union and other outside advocates. There is a push now to get the first humanist chaplain installed in the Army.

“That really riled me up,” Heath said. “The frustrating thing for me is we started this before the humanists were even on my radar. What spurred this most recent push to get Heathen added is that humanism got approved.”

That's when Heath put together his team to submit the appropriate paperwork and push the request up the Army's chain of command.

The efforts generally led to nothing until early this year, when Col. Bryan Walker, an Army chaplain and personnel director for the Army’s Office of the Chief of Chaplains, informed Heath's team that Asatru and Heathen had been approved. The group celebrated.

Then came word from the chaplain's office that the announcement had been premature. Six months later, Heathen and Asatru are still not recognized.

"Army Heathens are now in a state of limbo," wrote Karl E.H. Seigfried, a writer and lecturer who has followed the process closely on his blog, Norse Mythology. "Inquiries are being given stock responses from the Chaplains Office. In January, the only issue was waiting for the code to be entered. Now, the Army position is that the original request for addition of the religious preference has not been approved, but is 'under active consideration.'”

Walker declined to be interviewed for this story, and the Office of the Chief of Chaplains declined to make another spokesman available.

No one knows how many Heathens serve in the armed forces -- since they can’t identify as such it is hard to count them -- but Heath estimates there may be as many as 5,000. If the number is even half that, it would mean there are more Heathens in uniform than there are Wiccans, a faith the Army recognized in 2001, according to 2014 numbers from the Department of Defense.

So at the moment, the Heathens are back at square one. But Heath said he is not about to quit fighting -- even thought he left active duty in 2011 and the reserves in 2013.

“I don’t quit,” Heath said. “My goal was to get this added and then I could walk out of the military and know that other soldiers were cared for because of what I had done. I could be 20 years out of the Army and if this still needed to be fought, I’d be fighting it.”