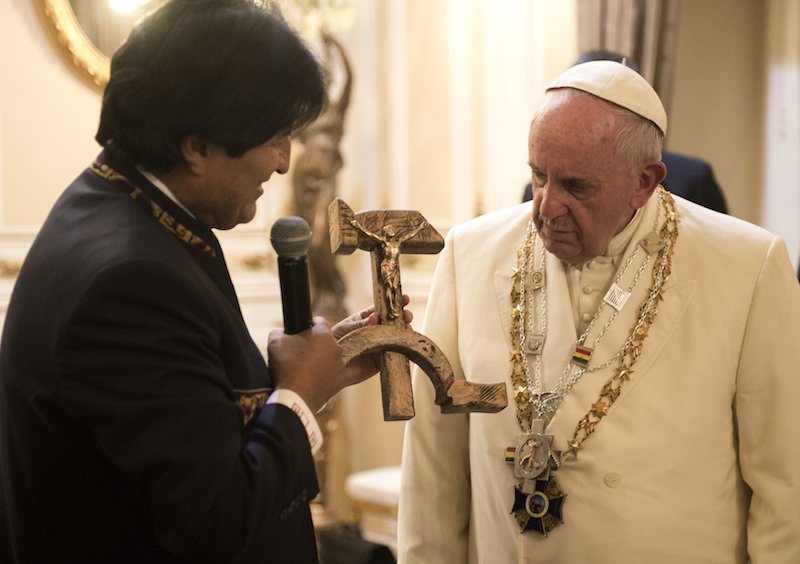 Pope Francis receives a gift from Bolivian President Evo Morales — a crucifix on a hammer and sickle — in La Paz, Bolivia. Photo courtesy of REUTERS/Osservatore Romano

LA PAZ, Bolivia (Reuters) – Pope Francis on Wednesday praised Bolivia’s social reforms to spread wealth under leftist President Evo Morales and urged the world not to view prosperity as material wealth, which he warned only breeds corruption and conflict.

Morales’ strained relations with the Catholic Church have begun thawing under the Argentine-born pontiff’s papacy, and he warmly embraced the pope seven years after denouncing the Church as “an instrument of domination.”

Francis, Latin America’s first pope, made back-to-back addresses in the thin air of La Paz, which sits in a bowl surrounded by mountain peaks, and showed no sign of suffering from altitude sickness.

Aboard his flight from Ecuador, where he began his “homecoming” tour, the pope drank a tea made of a mix of coca leaves, chamomile and anise seeds to ward off illness, a flight attendant said. Local residents chew coca leaves, the main ingredient for cocaine when processed but which have only a mild stimulant effect in their natural form.

Wearing a white poncho over his white cassock to warm him against the Andean wind, Francis welcomed Bolivia’s social reforms. Morales has nationalized key industries such as oil and gas to finance welfare programs and distribute wealth.

“Prosperity understood only in terms of material wealth has a tendency to become selfish … to be unconcerned about others and to give free rein to consumerism.”

“Understood this way, prosperity, instead of helping, breeds conflict,” he said.

In his address to the pope, Morales, who had frequently clashed with Church officials in Bolivia before relations improved when Francis was elected in 2013, welcomed the pope as a homecoming hero.

“In many historic moments, the Church was used for domination, subjugation and oppression. Now the Bolivian people receive you with joy and hope,” said Morales, wearing a dark suit with an indigenous pattern embroidered around the lapels.

“We welcome you as the chief representative of the Catholic Church coming to support the liberation of our Bolivian peoples.”

The pope looked bemused when Morales handed him one of the more unusual gifts he has received: a wooden hammer and sickle – the symbol of communism – with a figure of a crucified Christ resting on the hammer.

After spending a few hours in La Paz, the Pope, who lost part of a lung to an infection when he was a young man, moved on to the low-lying provincial city of Santa Cruz for a two-day stay.