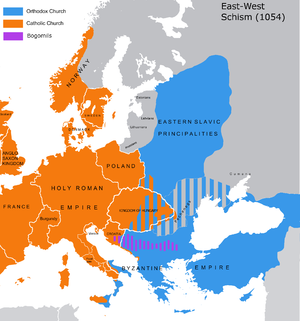 Great Schism between Eastern and Western Churches in 1084

They may both be right, but behind the moral standoff is a difference in approaches to human error that has divided Eastern and Western Christianity for centuries. It’s the difference between the Orthodox idea of economia and the Augustinian conviction that either it’s right or God brings the hammer down.

Economia recognizes that while all warfare is bad, sometime people have to fight and then get to repent for it. Augustinianism sees wars as either just or unjust. Economia recognizes that while divorce is bad, sometimes a husband and wife have to split up and they then get to remarry (somberly, no more than twice) and remain Christians in good standing. Augustinianism says no to divorce, and no to communion for those who remarry.

Economia, in other words, is all about rules of mercy. As the King James version of the Lord’s Prayer puts it, “And forgive us our debts, as we forgive our debtors.” Augustinianism is all about rules of judgment: “And he shall separate them one from another, as a shepherd divideth his sheep from the goats.”

Over at the Economist, the blogger Erasmus (himself Eastern Orthodox) meditates on the East-West divide and suggests that established churches on both sides need to speak truth to the powers that underwrite their operations. I’d say that the Eurocrats should be told that, even as they speak, Pope Francis is pushing his church to open its doors to the divorced and remarried. And the Greeks need a reminder that there’s no economia without repentence.