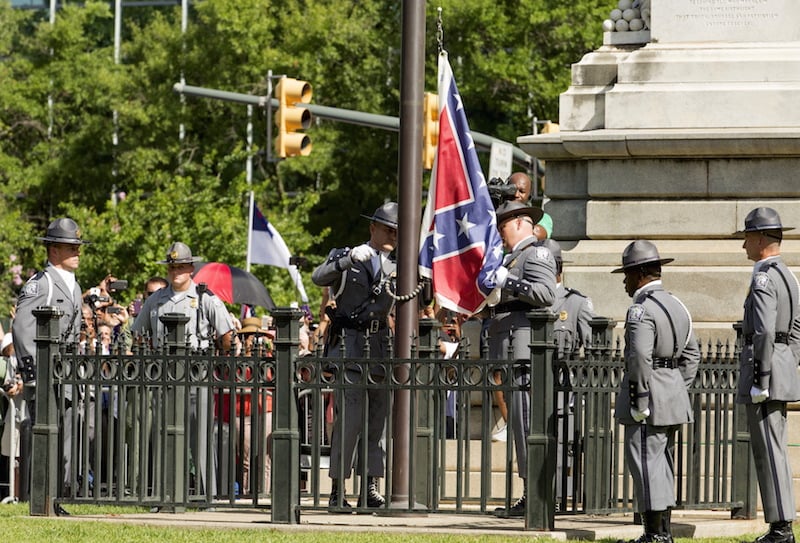 The Confederate battle flag is permanently removed from the South Carolina statehouse grounds during a ceremony in Columbia, South Carolina, July, 10, 2015. Courtesy of REUTERS/Jason Miczek

COLUMBIA, S.C.  – The Confederate battle flag — a powerful symbol of slavery and the Old South that has roiled emotions in South Carolina for decades — was removed from the Statehouse grounds Friday (July 10) in a brief ceremony observed by thousands kept at a distance behind metal barriers.

With little fanfare, a seven-man South Carolina Highway Patrol Honor Guard, that included two African-Americans, slowly lowered the banner from its perch alongside a Confederate memorial near the Capitol.

The guard, marching in precision, approached the small iron fence housing the 30-foot flagpole, opened the gate and lowered the banner.

The crowd erupted with shouts of “take it down!”

One trooper smartly folded the flag, while another rolled it up. The entire process took less than 10 minutes.

It was being retired “with dignity,” as Gov. Nikki Haley noted in signing the bill authorizing its removal. It was being taken to what Haley called its “rightful place” in the Confederate Relic room in the State Museum, down the road from the Capitol.

Haley was on hand for the lowering of the flag. She was accompanied by former Govs. David Beasley and Jim Hodges, and Charleston’s Mayor Joe Riley.

Even the pole itself is slated to come down.

Emotions, however, continue to simmer over the long-festering issue.

Charles Jones drove down from Greenville to witness what he called “a sad day.” Jones said his great grandfather Christopher Columbus Jones died in the Civil War.

Jones said he’s never owned a flag, but he bought one this week to wrap himself in when the flag is lowered from the Statehouse.

The city of Columbia issued an emergency order Thursday night to ban weapons from 250 feet in any direction of the Statehouse grounds. Some people walking along Gervais Street toward the Statehouse greeted each other with: “Big day today. Flag’s coming down.”

The ordinance will last for 30 days. The city took the action both for Friday’s ceremony and because of social media posts that indicated members of hate groups who plan to demonstrate at the Statehouse in coming days — including a Ku Klux Klan rally scheduled July 18 and a New Black Panther Party rally – had indicated they would be carrying weapons.

The battle flag in one version or another has flown at the Statehouse for more than 50 years, going up in 1961 to recognize the 100th anniversary of the Civil War and staying up the following year as a protest of the civil rights movement.

A 2000 compromise relocated it from the Statehouse dome where it was flying for the final time on Friday.

The symbol of the South’s lost cause of slavery and secession has been despised by African-Americans for 150 years, while many whites honor it in tribute to their rebel ancestry.

The issue came to a head in the wake of the killing of nine black worshippers at the Emanuel AME Church in Charleston last month by a young white supremacist. The 21-year-old suspect, who is charged with nine counts of murder, had posted photos of himself online posing with Confederate flags.

With nine pens that she gave the families of the “Emanuel Nine,” Haley signed the historic legislation that overwhelmingly passed the South Carolina House early Thursday.

Some family members of the victims were on hand to watch the flag taken down.

“This is a story of the history of South Carolina and how the action of nine individuals laid out this long chain of events that forever showed the state of South Carolina what love and forgiveness looks like,” Haley told the audience before the signing. “Twenty-two days ago, I didn’t know if I would ever be able to say this again. But today I am very proud to say it is a great day in South Carolina.”

She cast the events as “a story of action,” beginning with the worshipers who welcomed and prayed with the suspect and ending with the legislative action to remove the flag the accused killer had embraced.

“Nine people took in someone who did not look like them or act like them. And with true love and true faith and acceptance, they sat and prayed with him for an hour. That love and faith was so strong that it brought grace to them and the families,” Haley said.

Spurred by the example of the families, Haley said, lawmakers began to think differently about the issue.

​”The actions that took place will go down in the history books,” the GOP governor said. 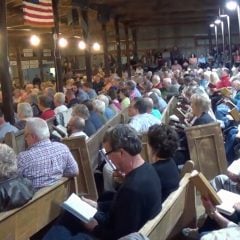 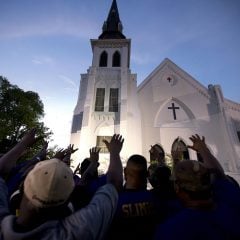 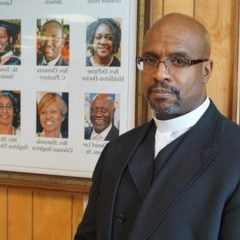 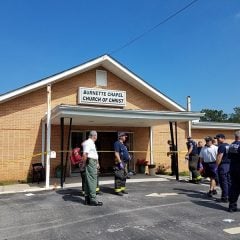