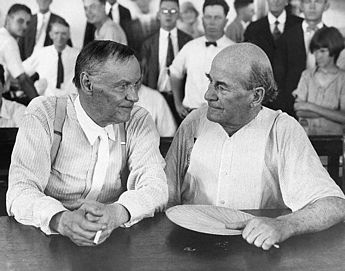 Clarence Darrow and William Jennings Bryan during the Scopes Trial

No doubt there’s something appealing about the Benedict Option, blogger Rod Dreher’s proposal that religious conservatives form themselves into communities of the upright and faithful to preserve (Christian) civilization in the new Dark Ages. How pleasant to think of oneself ensconced behind robust stone walls like the early Benedictine monks (though heterosexually married with kids, of course), spending one’s days praying, tilling the soil, eating and drinking well, and copying out ancient texts!

But really, the historical analogue for an American contemplating such a strategic retreat today is not Western Europe after the Fall of Rome but the United States after World War I, when secularism first hit the country full force. Under the pressures of urbanization and mass entertainment, of scientific advance and industrialization, the 19th-century evangelical consensus broke down and conservative Protestants panicked.

Their response was fundamentalism, a restatement of traditional Christian doctrine hopped-up with new rigidities like biblical “inerrancy” and an imminent millennium. They lost the battle for one mainline Protestant denomination after another, and the emblem of their defeat was the Scopes Monkey Trial, the media event in Dayton, Tennessee, that left the Jazz Age laughing at the old-time religion as the province of backwoods illiterates.

In its wake, the fundamentalists did more or less what Dreher has in mind. They created denominations in their own image and Bible colleges to feed them. They withdrew from an increasingly alien national culture and kept aloof from politics, spreading their gospel and growing their flocks in their own revivals and on their own radio stations. And in due course, they made a big comeback, becoming a force to be reckoned with from the rise of the religious right in the late 1970s until the Age of Obama.

So what’s the post-Obergefell Scopes Option for today’s religious conservatives? They’ve already got their denominations, their colleges, their media; and they don’t lack for mighty megachurch campuses to retreat from “a country in chaos,” to quote the president of the Southern Baptist Convention. What they lack is a younger generation concerned about same-sex marriage, the rise of the Nones, and the government’s insistence that health insurance provide free contraceptive coverage for women.

I’d say they have their work cut out for them.