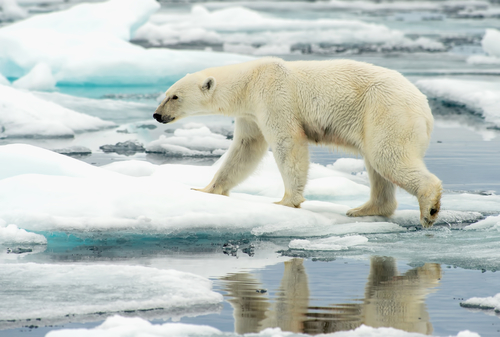 A polar bear walks along ice floes in the Arctic Ocean.

The plan, which is expected to be released Monday (Aug. 3), aims to cut carbon pollution by 30 percent from 2005 levels. Coal industry leaders have said the plan will increase costs and have a minimal effect on climate change.

The letter from evangelicals says that 230,000 “pro-life Christians” have contacted the Environmental Protection Agency in support of the plan.

The evangelical endorsement is the latest juncture in a growing movement among evangelicals who link their work against climate change with their emphasis on protecting the “health of our children and the unborn.” The letter comes ahead of a mid-August visit to the Vatican by leaders of the Evangelical Environmental Network to discuss climate change, the topic of Pope Francis’ recent encyclical.

Alexei Laushkin, EEN vice president, said Washington-area Catholics and evangelicals are planning meetings ahead of the pope’s September visit to the nation’s capital in hopes of continuing their joint work on climate change.

In 2012, EEN was criticized by some Christian conservatives for its support of the EPA’s rules to reduce mercury emissions from power plants. EEN joined the U.S. Conference of Catholic Bishops and the National Association of Evangelicals in saying a federal mercury standard would protect the unborn and infants.