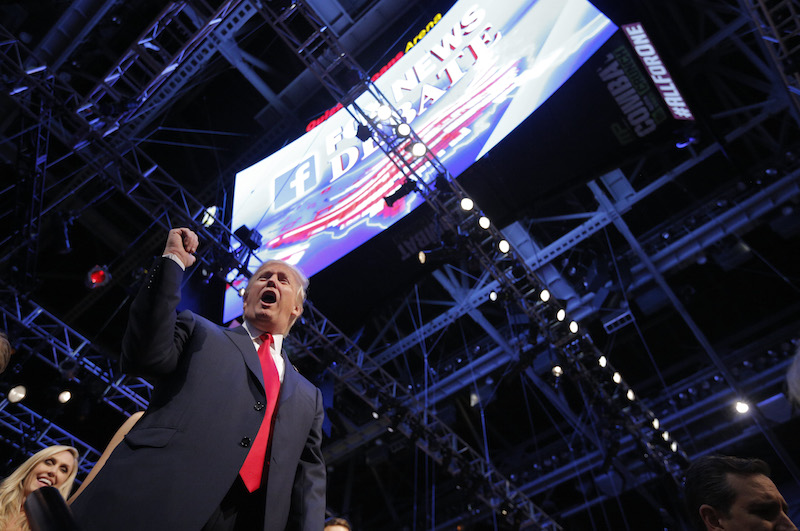 (RNS) How is it possible for salt-of-the-earth, family-loving conservative Christians to be taken with a serial adulterer who won’t take back misogynistic comments and who publicly trumpets the fact that he doesn’t make mistakes that require God’s forgiveness?

The rise of “The Donald” as a presidential contender is a story in itself. But what most puzzles me about Trump’s campaign is that I know some conservative, “family values” voters who have taken to him. I’m not talking about evangelical pastors and the leaders of evangelical institutions. (I can’t find any support for Trump in those circles.) I’m talking about some of the people in red states who go to church regularly, read Christian fiction, watch Veggie Tales with their kids, and are generally conservative in their political views.

This, even though Trump recently wondered out loud to Anderson Cooper: “Why do I have to repent or ask for forgiveness, if I am not making mistakes?” And in a room full of faith and family values voters, he said: “I think if I do something wrong, I just try and make it right. I don’t bring God into the picture. I don’t.”

READ: Arian Foster: Can you be an atheist in the NFL?

For Trump, repenting may be, in his words, “terrific,” but it’s not really his thing. Better to expend one’s energy in avoiding any mistakes that require asking for forgiveness.

Considering the last few weeks of the presidential primary campaign, Trump would do well to avoid any further mistakes. And he would do well to acknowledge the mistakes he has already made and ask for forgiveness.

But I doubt we’ll see Trump do either — avoiding or acknowledging. He’s bound to say more offensive things in the future, and it’s unlikely he will backtrack on any of them.

So why do some conservative Christians admire him? The one aspect that draws people to Trump is his fearlessness when it comes to offending the sensibilities of the cultural elite. We shouldn’t underestimate just how attractive his unguarded rhetoric is to conservatives who feel increasingly shut out of important conversations.

Many voters feel like it’s difficult to speak to contentious issues these days (immigration, race relations, the nature of marriage, etc.). Trump’s way of “telling it like it is, no matter the consequences” comes as “a breath of fresh air” to conservatives who worry that “political correctness” is preventing us from having tough conversations.

Unfortunately, that “breath of air” is more foul than fresh. It’s one thing to smash the ridiculous rules of the PC police if you want to elevate and move forward a conversation; it’s another thing to break those rules so you can plunge our nation’s discourse into the gutter of personal insult and disgusting attacks. Trump has accomplished the latter, not the former. And the same bombastic dogmatism that has garnered Trump so much attention is now overtaking his campaign.

So, it still boggles my mind that any conservative Christian would consider casting a vote for someone like Trump. Not because he is not an evangelical (plenty of conservative Christians voted for a Mormon last election). Not because he isn’t religious ( Reagan wasn’t much of a churchgoer either). The support for Trump among some of the religious voters in our nation surprises me because Trump is not a man of character.

This is a man who does not know the meaning of the word “shame.” A man who lacks the basic self-awareness to see his own sins and need for redemption. A man who has flip-flopped on multiple issues important to social conservatives. A man who shows a lack of basic respect to women, to veterans, and to his political opponents. A man who has admitted to funding campaigns in order to have influence (and then points to his own involvement in corruption as a way of exposing Washington’s “broken system”).

Looking on the bright side, I don’t see much of a future for Donald Trump with evangelical voters. I don’t know of any prominent evangelicals who have supported him. And the conservative voters who are currently enjoying Trump’s roller coaster will soon be sick to their stomachs and be asking to get off the ride.

Still, it is a strange moment in American politics when a man who fails to embody even a few of the virtues lauded by churchgoing folks across the nation captures even a sliver of their hearts’ affections.

It will be a long time before Trump sees any of his own mistakes and begins to regret them. Hopefully, it won’t take as long for his religious followers to see his campaign for what it is and regret their big mistake.