When Jamie Zvirzdin was living in the Marshall Islands a few years ago, she had a cultural and religious awakening. Suddenly the tidy Mormon gospel she had taken for granted all her life just wasn’t quite big enough.

The Sandy, Utah native had always been a diehard Mormon – “religious scrupulosity was my middle name,” she said in an interview this week – until living in a radically different culture challenged some of her assumptions.

For example, it no longer seemed fair for her to teach the Young Women under her care that they shouldn’t shop on Sundays; in their world without refrigeration, electricity, and pantry shelves full of food, daily shopping was imperative.

Additionally, Zvirzdin began to realize that the gender roles she had been raised on in Mormondom were not universal – and in fact were sometimes harmful.

“So I started polling my friends: What does it mean to you to be a Mormon woman?” she explains. “And this book idea came about, to address gender expectations in Mormonism.”

The just-published anthology Fresh Courage Take: New Directions by Mormon Women features a dozen essays by Mormon women. Most of the contributors are on the younger side (early 30s), though one, Colleen Whitley, is a retired BYU professor and a proud grandmother.

Most of the writers are still active members of the Church, but a few, including Zvirzdin, have made the painful decision to pull up stakes.

One factor in her decision stretches back to growing up as a Utah girl who was more interested in science than in motherhood. (She is now a science editor and writer.) “I feel like my parents encouraged me in science, but the general church culture did not,” Zvirzdin says. She carried around with her an ideal of the Mormon woman that she was supposed to be, and she berated herself when she fell short. “I grew up with a very specific Mormon woman identity that is more cultural than doctrinal, but either way, it’s not who I am.”

Many women in the Church, she says, “have this ideal of who they’re supposed to be in order to be good and to be loved. And usually, that ideal includes marriage and multiple children. One of my favorite quotes in the Church is by [former Relief Society General President] Barbara B. Smith, who said that ideals are stars to steer by, not sticks to beat ourselves with. I love that, and I would also add that ideals should not be sticks we beat other people with!”

Zvirzdin also points out that as a metaphor, this notion of our ideals as stars should remind us of something we learn from science.

“Stars themselves are not fixed or permanent in the cosmic scheme of things; even they are relative. You know how the Big Dipper displayed on the Salt Lake Temple points to the North Star?” (I didn’t.) “It points there now, but in a few thousand years, Polaris is not going to be the North Star anymore.”

Bottom line? “Ideals are very relative and can become dangerous for women.” 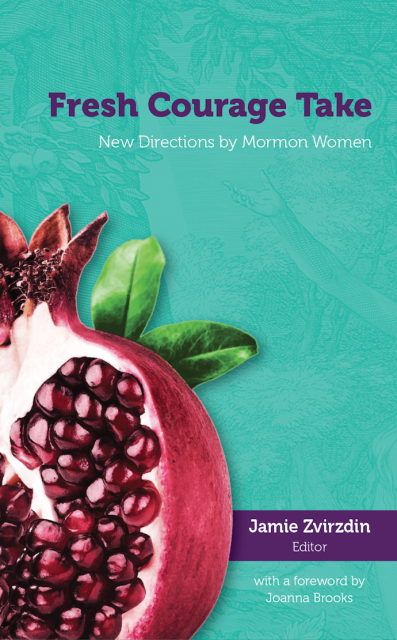 Zvirzdin sees great progress in the fact that many different kinds of Mormon women – active and inactive, conservative and progressive – could join together in solidarity to do a book project like this, even when they don’t agree.

“When I told my authors in an email that I didn’t believe as I used to, a few of them were very concerned and even considered pulling out of the project. That hurt, but I understood—I also grew up with ‘if you’re not with us, you must be against us’ fears. However, I asked them to read the whole manuscript before they made their final decision, and they all did . . . and they all stayed.

“That to me points to the greatest power of the book. In fact, one of them said she stayed up all night reading it, and it made her wish she had been even braver in her own essay. Some of the things the other authors wrote were things she also felt but had never dared express to anyone but her husband.”

Zvirzdin cautions that these 12 essays are in no way representative of all Mormon women, but she hopes the book will encourage other women to speak more openly about their own experiences.

“I’ve seen a lot of hiding, and that is what bothers me the most,” she explains. “A lot of Mormon women feel they need to hide their pain. But we just can’t shame women for what they’re feeling if we’re serious about comforting those who are in need of comfort.”

Faith
Senator Mike Lee’s just one example. Mormon men still like Donald Trump.
Christianity
For Mormons in a faith crisis, the Gospel Topics essays try to answer the hard questions
Flunking Sainthood
Retired BYU professor denounces Donald Trump in viral video
Flunking Sainthood
Suicide, complicated grief and the hidden darkness of the heart
Flunking Sainthood
10 years after Elder Packer’s anti-LGBTQ talk, have Mormons turned the corner on gay rights?
© Copyright 2020, Religion News Service. All rights reserved. Use of and/or registration on any portion of this site constitutes acceptance of our User Agreement and Privacy Policy, Privacy Statement and Cookie Notice. The material on this site may not be reproduced, distributed, transmitted, cached or otherwise used, except with the prior written permission of Religion News Service.