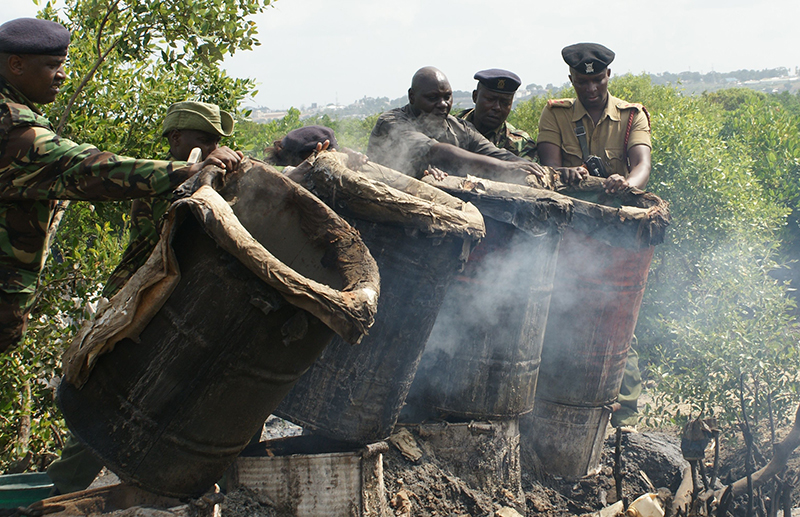 In an operationg against illicit brews in Mombasa, administration police officers prepare to pour out the brew from drums in 2013. Religion News Service photo by Fredrick Nzwili
August 12, 2015
Fredrick Nzwili 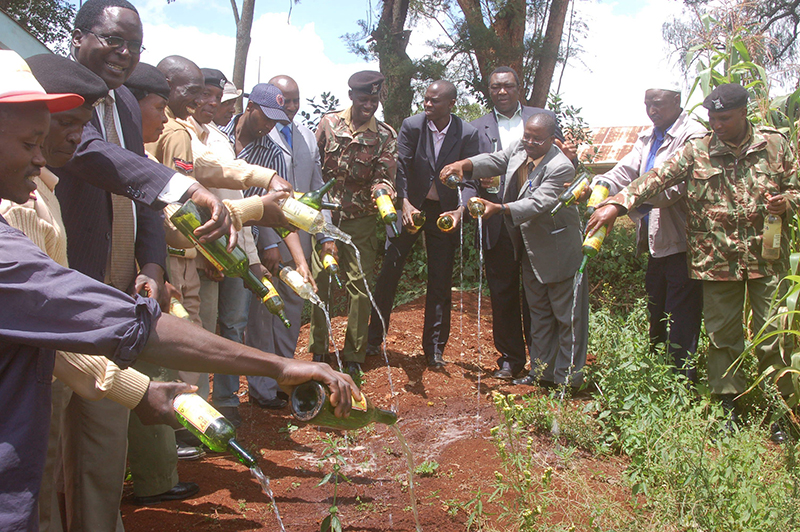 Until recently, most Kenyan homemade brews were safe and were consumed at traditional parties, but unscrupulous brewers in the last few years have been introducing industrial chemicals such as methanol to make the drinks stronger and to quicken the brewing process, turning the drinks into poisons.

READ: Churches on alcohol and leadership: A sampling

Local church leaders are alarmed, and say addiction to the stronger brews has become a leading killer. It is also destroying families and youth and entrenching poverty, they say.

The U.N.'s World Health Organization said in a 2014 report that alcohol is a leading cause of death in the world, killing an estimated 3.3 million annually. WHO says most alcohol consumed in Africa is illegal. 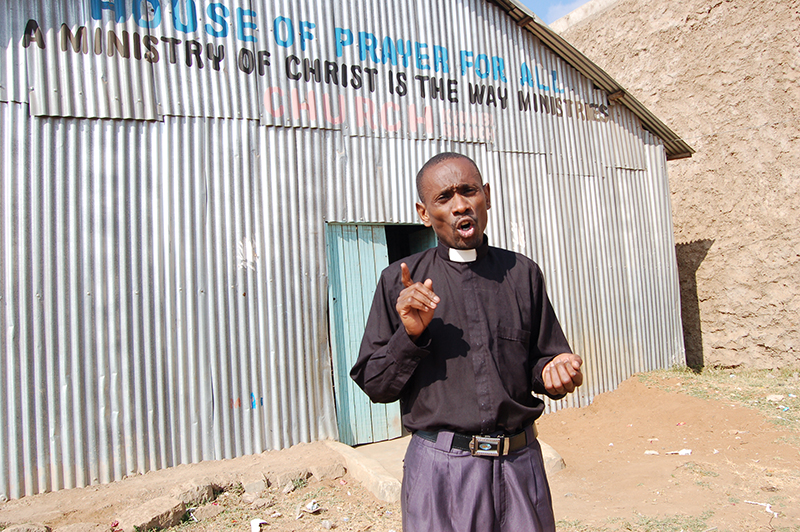 The Rev. James Kyalo, head of the House of Prayer for All, a Pentecostal church in Kyumbi area, says the brews keep young men away from churches. Religion News Service photo by Fredrick Nzwili

The Rev. James Kyalo of Kyumbi, a highway junction market center on the Nairobi-Mombasa Highway, near Machakos town, is among those who are increasingly concerned.

He said he often reaches out to drunken men who stagger past the House of Prayer for All, a Pentecostal church in the market center, where illegal drinks have proliferated. The drinking dens outnumber ordinary shops, Kyalo said.

Recently, a poisonous homemade brew killed over 50 people -- mainly breadwinners -- and left several others blind. “Even with the deaths, they have not stopped taking the deadly spirits,” Kyalo said.

“As pastors, we often speak about it. We know drinking keeps youth away from our churches,” added Kyalo.

Kyumbi is not the only area where the brews are devastating communities.

In an operation against illicit brews in Mombasa, administration police officers prepare to pour out the brew from drums in 2013. Religion News Service photo by Fredrick Nzwili

In July, President Uhuru Kenyatta ordered a national crackdown on illegal brewing, calling it “a business of death.”

The government attempted to regulate illicit brewers in 2010 and licensed some; brewers were required to sell their drinks in bottles through legal channels.

Now, licenses for 385 alcohol brands have been canceled and 112 companies banned.

“No one has the license to kill Kenyans. All these businesses must be closed,” said Kenyatta in July.

READ: What to do about Gandhi beer

Before his actions, women in the region had protested that the drinks were destroying their homes and stealing their spouses.

Close to 4 million Kenyans consume illegal alcoholic brews, found a 2013 survey by the National Authority for the Campaign against Alcohol and Drug Abuse. The biggest challenge is corruption among government officials, said the agency's John Mututho.

Some clergy have been joining community members to seek out and storm the makeshift breweries -- many just drums or pots hidden in forests, private residences or buried near riverbeds.

“We commend the steps taken by the president. As clergy, we do not encourage drinking,” said Anglican Bishop Julius Kalu of Mombasa. “We urge more steps to ensure those addicted are rehabilitated.”

Kyalo agrees. The president, he said, “took bold steps, but he has to address the root cause of the problem. This is deeply rooted, where people are poor. He must deal with poverty, which is increasing.”