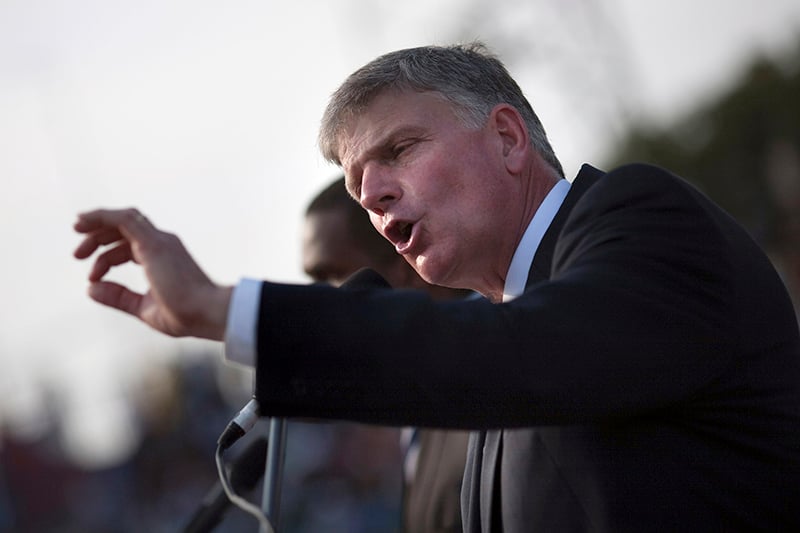 (RNS) Franklin Graham’s annual compensation of $880,000, revealed in a Charlotte Observer story, has some worrying that too many top Christian nonprofit leaders as well as pastors are seeing themselves as CEOs instead of as God’s servants.

Graham, son of renowned evangelist Billy Graham, is head of Samaritan’s Purse, an international relief agency based in Boone, N.C.

CEOs at the top 50 U.S. charities, including Samaritan’s Purse, earn in the $350,000 to $450,000 range, which makes Graham’s $622,000 salary from his aid organization alone about 40 percent to 50 percent higher than average, according to a Forbes story. He receives the rest of his $258,000 compensation as CEO of the Billy Graham Evangelistic Association. 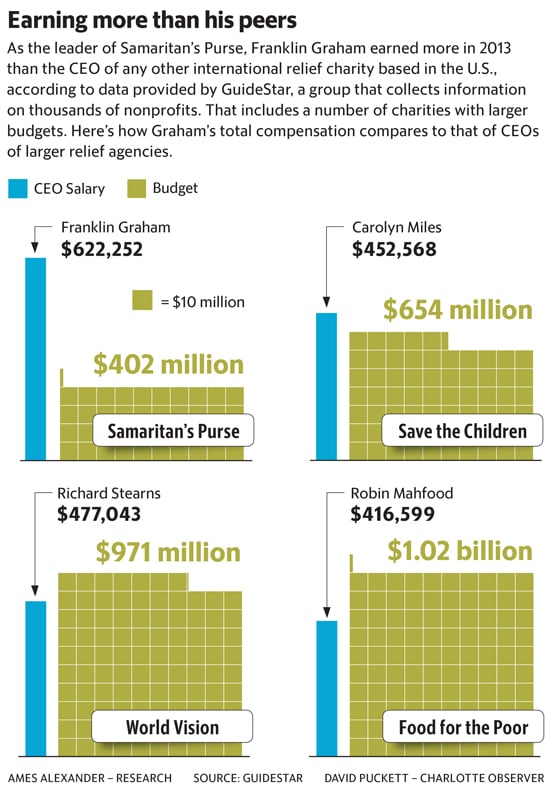 “Earning more than his peers,” comparing Franklin Graham’s salary to that of other CEOs of larger relief agencies. Graphic by David Puckett, courtesy of The Charlotte Observer

A spokesman for Franklin Graham said his compensation was determined by independent commissions that compared similar organizations’ top salaries. Graham was not available to answer questions.

By contrast, pastor salaries at the nation’s biggest Christian churches are much lower for all but a select number. Only 3 percent of churches with more than 1,600 people in attendance pay senior pastors more than $300,000, said Warren Bird, research director at Leadership Network.  At the other extreme, a recent study by the National Association of Church Business Administration found that the average American pastor with a congregation of 300 people earns a salary of less than $28,000 a year.

In a 2011 comparison of megachurch pastors’ salaries, two senior pastors made $1 million and $1.1 million. Others were a fourth to less than half of that.

Among the exceptions: Southern Baptist the Rev. Ed Young, senior pastor at Fellowship Church in Grapevine, Texas, pulled in well over $1 million, according to a 2012 Dallas television news report.  And in 2013, his last year as pastor at Seattle’s Mars Hill Church, the Rev. Mark Driscoll was drawing a $607,000 package, with a $150,000 raise promised. The word “CEO” is often used when speaking of megachurch pastors who oversee multimillion-dollar budgets, manage media empires and publish best-selling books. “He could have been a CEO in any corporation in America” is an oft-repeated phrase among proud church members.

Pastors make sure well-heeled businesspeople are on their boards, said Jim Henderson, co-author of “Question Mark,” a new book tracing the downfall of Mars Hill’s Driscoll.

READ: Most Utah Mormons want their church out of Boy Scouts, poll shows

“These guys make phenomenal amounts of money. So when it comes time to set the pastor’s salary, what seems like an ungodly amount of money to the rest of us, seems normal to them,” Henderson said.

A prosperous church with business executives on its board might ask “How embarrassed would we be to pay our pastor a lot less than I make?” said historian Joel Carpenter, director of the Nagel Institute for the Study of World Christianity at Calvin College.

But donors to Christian charities may think differently.

Grant Wacker, author of “America’s Pastor: Billy Graham and the Shaping of a Nation,” said he had just read the Observer story about Franklin Graham’s compensation when he received a solicitation for money from Samaritan’s Purse.

Compensation in the mid- to high-six figures “is on the generous side for anyone who is asking for other people’s money,” the professor emeritus at Duke Divinity school said a bit wryly. “It’s eyebrow-raising.”

“Does he live ostentatiously or does he give it away?” asked Wacker.

Franklin Graham, who is 63, has said he wants to make enough money to be able to work for free when he turns 70.

By contrast, California megachurch pastor Rick Warren has been giving away 90 percent of his income for years, as part of a strategy he calls “reverse tithing.”

Such outside comparisons are considered good practice for nonprofits, but the Evangelical Council for Financial Accountability asks for more.

“Compensation-setting practices should be consistent with generally accepted biblical truths and practices,” according to its guidelines.

“It’s a moral issue particularly for a man of faith,” Pablo Eisenberg, a senior fellow at the Georgetown University Center for Public & Nonprofit Leadership, told the Observer. “And also you have to remember that (compensation is) partly paid for by the taxpayer. In a sense, we the taxpayers are subsidizing Frank Graham’s salary and his relatives who are paid.”

Nonprofits are governed by the federal nondistribution constraint, which specifies that in return for tax-exempt status, they will use donations for the good of clients and not distribute excessive amounts to those who oversee the organization, Dixon said.

Not all of the big Christian charity CEOs are making huge salaries.

Lutheran Charities, a $21 billion organization, pays $181,858 to its highest-paid employee. At Cru, the college campus ministry, the highest salary is $150,787, according to Forbes magazine.

CEO Steve Stirling at MAP, a $349 million international Christian aid organization, made significantly more than his current $200,000 total compensation at other jobs, both for-profit and nonprofit.

“I did take a reduction in salary from my previous job,” he wrote from Ghana, where he is working this August.

Why? “Because MAP is a Christian organization, and I strongly believe in the mission.”