Alison Bechdel, a cartoonist and novelist, is perhaps best known for creating the “Bechdel Test,” a gauge of gender bias in film. She is also the author of two graphic memoirs, one of which, Fun Home, was selected as part of a summer reading program for incoming freshmen at Duke University. Fun Home chronicles Bechdel’s relationship with her father, a distant and authoritarian figure who committed suicide when she was nineteen. When Fun Home was selected last year as part of the summer reading program at College of Charleston, the South Carolina House of Representatives, led by Republicans, cut the school’s funding by over $50,000–the cost of the reading program.

The book is again at the center of a school controversy, with some freshmen at Duke refusing to read it on the grounds that Fun Home features “graphic visual depictions of sexuality.” Bechdel, a lesbian, writes and draws images relating to her sexual confusion growing up, her interest in women, and her father’s own closeted sexuality. The book contains one spread that depicts two naked women in bed together–mostly reading and discussing books–one panel on which a pinup calendar is drawn, and two that show (fully clothed) masturbation. It isn’t a book that deals in Christian views of sex, because the author isn’t a Christian. It did, however, result in the eventual awarding of a MacArthur genius grant to Bechdel in 2014, and it is one of the most interesting, singular, intelligent books I have ever read. I came to it through my Christian graduate school program.

READ: Why Alison Bechdel is the perfect MacArthur genius

If Christians want to avoid books that challenge their sexual mores, they might choose to stay away from Fun Home. But then, they also might want to stay away from the Bible! There is considerably more attention devoted to unseemly sexual practices in the Bible than in Fun Home, and some of it is described in explicit detail.

So you don’t want to read Fun Home? Fine, but stay away from Judges 19: 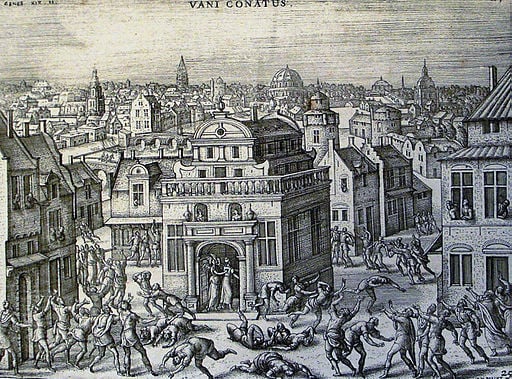 Lot and the Men of Sodom | By Phillip Medhurst (Own work) [CC BY-SA 3.0 (http://creativecommons.org/licenses/by-sa/3.0)], via Wikimedia Commons

“The men of the city, a perverse lot, surrounded the house, and started pounding on the door. They said to the old man, the master of the house, ‘bring out the man who came into your house, so that we may have intercourse with him.’ And the man, the master of the house, went out to them and said to them, ‘No, my brothers, do not act so wickedly. Since this man is my guest, do not do this vile thing. Here are my virgin daughter and his concubine; let me bring them out now. Ravish them and do whatever you want to them; but against this man do not do such a vile thing.'”

Also, keep out of Song of Solomon if you don’t want to encounter explicit portrayals of sex:

“My beloved thrust his hand into the opening,
and my inmost being yearned for him.
I arose to open my beloved,
and my hands dripped with myrrh,
my fingers with liquid myrrh,
upon the handles of the bolt.”

In 1 Samuel, Eli’s sons “lay with the women who served at the entrance to the tent of meeting.”

King David took Bathsheba away from her husband Uriah, had Uriah killed, impregnated Bathsheba, and then, after the baby died, impregnated her again, all while his son Amnon was falling in love with Amnon’s half-sister Tamar, a virgin, who he lured into his house and “being stronger than she, he forced her and lay with her.” Immediately after Amnon raped Tamar, he was “seized with a very great loathing for her; indeed, his loathing was even greater than the lust he had felt for her.” David’s new son, Solomon, went on to have 700 wives and 300 concubine, which would be frowned upon today unless they had a reality TV show.

The list goes on and on. I don’t say this to compare the Bible with Fun Home as sacred texts, although I really like Alison Bechdel. I don’t say it to make fun of the Bible or even those silly freshmen posting on Facebook about their morals. I say it because, as with all things, context matters, and Fun Home depicts sex in a way that makes perfect sense within its context. Reading things we disagree with is part of becoming an adult, and certainly part of becoming a college student. If even the Bible addresses sex in explicit, disturbing, and confusing ways, then Christians ought to be able to read this graphic memoir, even if they object to parts of it, and learn something more.