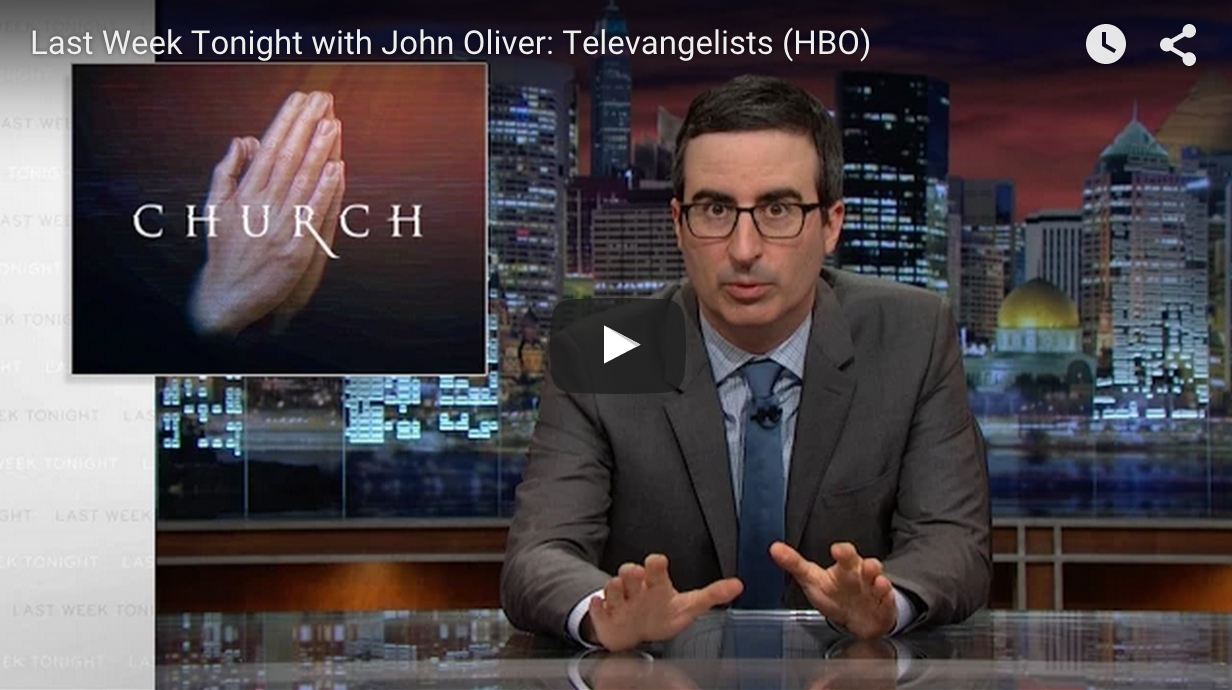 I love John Oliver. And his recent segment on the tax status of churches was brilliant and funny. That said, it’s not a justification to change how we exempt churches from taxation.

Oliver’s segment show just how easy it is to start a church in America. As I tell students: if you want to start your own religion with yourself as prophet or divine being, then you can do it. No questions asked.

In the parlance of economics, the result is as close to a free, unregulated market as you’ll find anywhere. Government doesn’t regulate the industry. It doesn't pick favorites by providing subsidies to one church but not another. No one is taxed. Startups require no government approval. No civil rights laws affect hiring or services.Government does not audit churches. It does not keep a register of religious groups. There is no “U.S. Department of Religion” that subsidizes or regulates religion. Churches do not even file the same paperwork (Form 990's) that other types of nonprofits submit as a means to provide transparency to the public.

As one would expect in any market like this, there are those who practice abusive or predatory actions.  Oliver’s segment lays out just how unseemly some religious groups can be as they pull in donations.

A reasonable reaction to such abuses is to call for regulations. At a minimum, some argue, churches should be taxed. This will never happen in our current political system. And it probably won't ever happen.

Here are five reasons why churches should not be taxed:

1. Government can't pick some churches to tax & regulate but not others.

Oliver focused on churches that preach the "Prosperity Gospel" and do so in a public way. His audience (myself included) laughed as he ridiculed some prominent TV preachers. Making pronouncements, giving blessings, and issuing calls for faithful giving is, well, something found in nearly every house of worship in America. Government can't pick and choose which ones are silly and which ones are legitimate. It must practice “benevolent neutrality.” If you tax the TV evangelist you don't like, then you also must tax the Unitarian/Universalist congregation, the synagogue, the Catholic parish, the Amish house church, and every other religious community.

2. If we tax churches, then we will need to tax all not-for-profit organizations.

Government may exempt churches from property taxes and other taxes so long as they do so for other charities. There are some who argue that, as in the case of religious groups on public campuses (Rosenberger v UVA), government can't select just religious groups to tax while leaving all other organizations like schools, women shelters, soup kitchens, and fraternal organizations tax-exempt.

3. To tax churches, government would need to have the (currently unconstitutional) authority to audit and regulate churches.

Income is revenue minus expenses. So, to tax revenue, the government has rules about what counts as legitimate business expenses and regulations on how businesses perform their accounting. The government may also audit organizations. To do this for churches means that the government would define what is and is not legitimate and then act to ensure compliance. This raises a constitutional issue as Congress cannot make laws that affect the free exercise of religion.

4. Taxation would benefit large churches and ministries and harm smaller ones.

As with any organization, larger is better. Big churches would have the resources to hire lawyers and accountants that would minimize their tax burden. Smaller churches that currently operate on shoestring budgets would face a relatively greater cost in order to comply with new regulations.

5. It wouldn't solve the problem.

Most of the discussion of taxing churches offers so-called megachurches or television-based ministries as examples of abuse. But if we tax churches, then churches will do what other businesses do---they'll increase expenditures in order to reduce taxable income. Again: income is revenue minus expenditures. The TV preacher's million dollar income? That's an expense. His clothes for his show? An expense. His jet to travel for business? Another expense. The cost of all those fundraising mailings? More expenses. By the end, there won't be any income to tax.