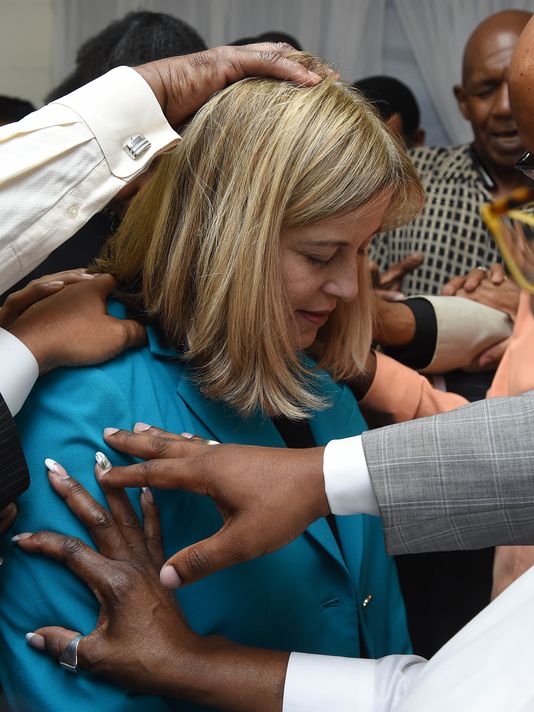 Megan Barry gets a layong on of hands. Photo from The Tennessean
August 27, 2015
Kimberly Winston

Travelblog is a series of occasional posts by RNS national correspondent Kimberly Winston, who is on the road with in Washington, D.C., Nashville, Tenn., Honolulu, Kuala Lumpur, Lahore and Islamabad, Pakistan with the 2015 Senior Journalists Seminar, sponsored by the East-West Center in conjunction with the U.S. State Department.

NASHVILLE, Tenn. (RNS) The single largest community of Iraqi Kurds in the U.S. is right here in Music City, the buckle of the Bible Belt.

They are joined by significant numbers of Somalis, Bhutanese, Egyptians, Latinos and Asians. There are so many international newcomers to Nashville that in just five more years, non-whites will make up the majority of the population.

Yet all of Middle Tennessee's diverse voices are singing together in harmony, Karl Dean, the outgoing Democratic mayor, told our group of 17 international journalists traveling with on a fellowship organized by the East-West Center,

“Our city is changing rapidly and in my opinion that is a good thing,” Dean said as he addressed us at the Mayor's Office in downtown Nashville. “I think the city’s increase in immigration has gone hand-in-hand with its rise in economic prominence and as an important city in the U.S. I have always taken the viewpoint that when an immigrant comes to the U.S. and chooses to live in Nashville to see out their dream that is the highest compliment they can give us.”

That’s one way of looking at the situation. But the newspapers tell a little bit of a different story. In 2008, a group of skinheads burned a mosque to the ground. One year later, the city tried to pass an English-only ordinance that was ultimately defeated. And when a Muslim family moved into a house next door to the one-time “Saturday Night Live” actress Victoria Jackson, she took to the blogosphere in an anti-Islamic, pro-Jesus rant.

And then there’s this figure — Tennessee has 29 hate groups, the seventh-most in the nation. The largest chapter of Act for America, the hate group Dylan Roof is known to have encountered online prior to shooting nine people in a Charleston church, is in Tennessee.

Not so harmonic. Yet at our next stop, we saw what the city has done to promote cooperation and reconciliation among its diverse groups. At the Metro Human Relations Commission a few blocks from the mayor’s office, Melody Fowler-Green coordinates 17 volunteer commissioners from the city’s different communities who work to iron out the wrinkles in the fabric of the city's life.

The commission works to make Nashville's civic life more inclusive, promotes multicultural education, has a "Teaching Tolerance" program for schools and operates a host of other pro-diversity programs and events.

“I think it’s been a rough road for us here in Middle Tennessee,” Fowler-Green said. “But I think you will hear matters have improved. We have to make this a priority — to build bridges.”

Not only outsiders have faced discrimination here. In the afternoon we met with a group of editors, opinion writers and reporters from The Tennessean, the storied local paper where Al Gore was once a cub reporter, and the Associated Press.

Duane Gang, The Tennessean’s “content strategist” — sounded like he was its metro editor to me — told us the paper was running a story on the day of our visit about a “whisper campaign” against Megan Barry, a front-runner in the current race for mayor. There were rumors circulating on the internet that Barry  is an atheist. That’s still a bad thing in a city with 700 churches — more than the larger city of Atlanta — and where The United Methodist Church, the Free Will Baptists, Lifeway Christian stores and Thomas Nelson, the giant Christian publisher, maintain their headquarters.

And Tennessee is one of eight states that still have laws requiring anyone who holds public office be a religious believer — laws that are unconstitutional but somehow remain on the books.

So Barry tried to dispel the atheist rumors by going to a prayer breakfast with a group of local clergy. They prayed together, there was a laying on of hands by the clergy on the candidate and she felt she had to declare herself. “I am a Christian,” she told them.

Megan Barry gets a layong on of hands. Photo from The Tennessean

Related Posts
By Shumaila Hemani
As a Sufi singer, I believe the sounds of world religions can cultivate compassion during COVID-19
By Bob Smietana, Alejandra Molina
Death of megachurch pastor Darrin Patrick officially ruled a suicide
By Carr Harkrader
12 Black faith leaders who shaped America
By William Kole
Interfaith group: No Buddhist or Hindu statues in nightclubs
By Caitlin Yoshiko Kandil
'I have to find the Mecca of my heart': Muslims grieve as hajj is drastically limited